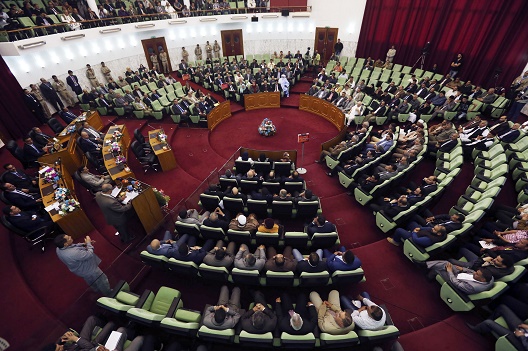 The Constitutional Drafting Assembly (CDA) was elected in February 2014 with a mandate to draft a constitution to replace the Draft Constitutional Charter for the Transitional Stage, released in August 2011. It took the CDA eight months to produce a first draft and another four months to produce a second, with the latter containing important changes to the first. The second draft, released on February 3, 2016 sought to reconcile conflicting views and clashing interests, including the place of federalism, decentralization, women, ethnic minorities, and Shariya law in post-Qaddafi Libya. Whether it is a compromise document, acceptable to a majority of the Libyan people, or a compromised one that will be rejected by them remains to be seen.

The second draft does not return Libya to the federalist model in the 1951 constitution, as demanded by a vocal minority in the eastern and southern parts of the country. But to mollify them, it provides for multiple capitals and spreads key institutions throughout the country. Whereas the 1951 constitution provided for two capitals, Tripoli and Benghazi, the second draft identifies three: Tripoli as the political capital, Benghazi as the economic capital, and Sabha as the cultural capital. The executive branch and higher judicial council will be headquartered in Tripoli, the legislative branch or shura council in Benghazi, and the constitutional court and the higher council for local governance in Sabha. With Tripoli 1,000 km from Benghazi and 800 km from Sabha and Sabha 1,160 km from Benghazi, the efficacy of spreading government bodies around the country is open to debate. A related approach in the 1951 constitution proved unwieldy, bureaucratic, and expensive and was replaced in 1963.

Support for decentralization is wider spread than support for federalism, with recent public opinion polls finding considerable support for some form of decentralization in the new constitution. The second draft calls for political, administrative, and fiscal decentralization in a Libya divided into governorates and municipalities. Under this system, local governmental units would enjoy a legal personality and administrative and financial independence. In support of decentralization, Libyans in the eastern part of the country also have demanded that some ministries or state firms—notably the National Oil Corporation—be headquartered in Benghazi. In June 2013, the Libyan government promised to move some state companies to Benghazi, but no action was taken and the current draft is mute on this point.

Women often played new and unfamiliar roles in the February 17 Revolution, but in post-Qaddafi Libya, they have struggled to retain the responsibilities and rights they thought they had won during the revolution. Faced with a conservative backlash that has threatened to restrict or deny basic rights, Libyan women have fought to ensure a future grounded in inclusion, participation, and gender equity. The second draft of the constitution offers some hope, declaring Libyan men and women equal before the law, and all Libyans, men and women, guaranteed the right to vote and hold office. The second draft also contains a special provision for women, guaranteeing them no less than 25 percent of the total seats in elected councils for a period of three consecutive electoral cycles. In post-Qaddafi Libya, women have been underrepresented on official bodies, often with the excuse that they lacked experience; consequently, this special provision should encourage and facilitate their wider involvement in public affairs.

Qaddafi’s brand of Arab nationalism left no room in Libya for linguistic or other cultural expression by minority groups like the Berbers and the Tebu. Given the discrimination and political manipulation ethnic minorities suffered under Qaddafi, it was no surprise that they were among the first groups to join the revolution. The Berbers viewed the revolution as an opportunity to regain their cultural rights and ancient identity. With the overthrow of the Qaddafi regime, they demanded official recognition of their language, cultural identity, and contribution to Libyan history. When the General National Congress ignored their demands and the 60-member CDA reserved only two seats each for the Berber, Tebu, and Tuareg ethnic minorities (the Berber community alone is estimated to constitute upwards of 10 percent of the population and thus should have been allocated six seats), the Berbers boycotted the constitutional drafting process. Given this history, provisions in the second draft that support inclusive and diverse principles and claim to cherish all social, cultural, and linguistic elements are open to interpretation, but appear to address some Berber demands. The second draft declares Arabic to be the official language of the state as was true in the 1951 constitution and the 2011 Draft Constitutional Charter, but it also considers languages spoken by a part of the Libyan people to be national languages with article 65 dedicated to the protection of national languages and cultures. The second draft clearly goes some way towards addressing the demands of the Berbers and other ethnic minorities, but it remains unclear whether or not it goes far enough to regain their support.

Consistent with the 1951 constitution and the 2011 Draft Constitutional Charter, the second draft considers Islam to be the religion of the state. A provision in article 8 stating that “Islamic sharia shall be the source of legislation” is more problematic. Under Ottoman rule and the Italian occupation, both civil and religious courts existed in Libya and the monarchical regime, after much discussion, resorted to a similar practice. The 2011 Draft Constitutional Charter called for Islamic sharia to be the principal source of legislation, leaving open the door to other legal influences, and a robust debate took place in Libya after 2011 as to whether it would be the source, the principal source, or one source among others for legislation. The most recent public opinion polls suggested that most Libyans agreed that Islamic sharia should be a source of legislation, but there was no consensus that it should be the single source.

Other aspects of the second draft worthy of note include an emphasis on economic diversification, including the need to stimulate and grow the private sector, an issue important to the future health of the Libyan economy. The second draft also states that “public posts shall be open to all Libyans” (article 22) which could be interpreted to negate the May 2013 Political Isolation Law that barred broad categories of officials who had served the Qaddafi regime from holding public office for a prolonged period. Reflecting a widespread distrust of political parties, the second draft bans them for a period of four years (article 204). Finally, the second draft calls for the constitution to enter into force after the Libyan people have adopted it in a referendum, and it is circulated in the official newspaper. Whether or not the recently formed Government of National Accord will be able to establish the peace, unity, and stability necessary to conduct a nationwide plebiscite remains to be seen.

In an effort to garner consensus, the second draft of the Libyan constitution includes significant changes to the first. In so doing, it seeks to accommodate the wishes and demands of the many interest groups making up the Libyan polity, offering everyone something to like and something to dislike. In trying to be all things to all people, it is a masterpiece of compromise and concession that risks pleasing no one.

Ronald Bruce St John has published 23 books and monographs, including ten on Libya. He served on the Atlantic Council Working Group on Libya and the International Advisory Board of The Journal of Libyan Studies.

Image: Members of the special body tasked to draft a new constitution for Libya gather during the body's first meeting in Bayda April 21, 2014. (Reuters)