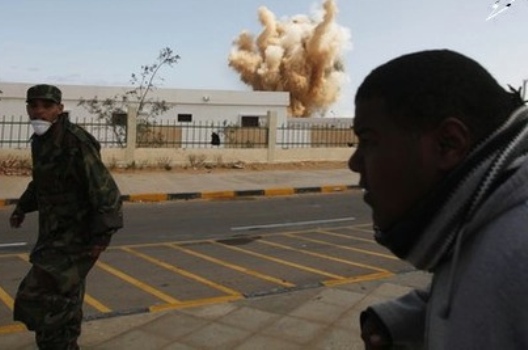 Boxed into a corner by U.S. President Barack Obama’s “red line” that the Assad regime has crossed with its apparent use of chemical weapons on August 21, the United States finds itself on the verge of intervening militarily in Syria’s increasingly brutal and complex civil war.

Whatever the United States and its allies decide to do in Syria, scant attention has been paid to the few important lessons that can be drawn from the multilateral intervention in Libya two years ago. Libya teaches us three things: 1) any intervention has to have a clear political strategy defining the mission’s objectives as well as plans to counteract the undesirable but foreseeable consequences that are natural byproducts of any intervention 2) limited intervention — like the kind under consideration for Syria –could have very dangerous consequences, potentially more dangerous than a less limited intervention 3) the political legitimacy conferred by Arab and regional powers, such as Turkey or Qatar, is essential for the success and public relations aspect of  the intervention, but also creates its own difficulties which must be actively counteracted.

In Libya, the United States and its allies initially stated that their aim was limited to protecting civilians. Based on that stated mission objective “regime change” through the continuation of air raids on Muammar al-Qaddafi’s assets was not a goal. However, based on how the protection of civilians was to be achieved, the United States and its NATO allies implicitly found themselves rapidly involved in a regime change campaign almost by default. Protecting civilians meant that they had to stop the advancement of the Libyan military toward the rebels’ stronghold in Benghazi. This meant striking both the advancing military columns and targeting the command and control posts from where the Libyan regime sent orders to attack civilians. The necessary rush to intervene to protect civilians meant that NATO became inadvertently engaged in an intervention without a coherent vision and with limited understanding of the political, public relations, and reconstruction activities that would be required in order to achieve a desirable outcome. In short, the United States and NATO were plunged into action prior to answering the primary question: once Qaddafi was eliminated, who would step into the vacuum; by what means, and how should the West facilitate the evolution of the political and security landscape of the country? Without a clearly thought-out long-term goal, limited targeted strikes intended to protect civilians flowed seamlessly into regime overthrow.

The result is that two years later, Libya’s interim government is increasingly faltering. Illegal actors — from criminal organizations to jihadist groups — control large swathes of territory, threaten the government, and destabilize the country. The fact that less than a year after liberation from Qaddafi some of these groups managed to murder a U.S. ambassador and scare away all but the most eager foreign investors is indicative of the depressing state of affairs.

The missing ingredient in the West’s “intervention” in Libya was the need for sustained involvement and deep, continuing engagement there. The United States was very popular and well regarded by most Libyans. After years of sanctions and isolation, Libyans wanted outside capacity building assistance and would have embraced it with open arms. Unfortunately, it was barely forthcoming.

The Syrian picture is completely different. Many people view the United States as uncaring, hypocritical, or even tacitly in favor of Assad — two years have gone by and the United States has barely lifted a finger. The United States has spoken about the need for Assad’s removal but in the eyes of most anti-regime Syrians has not done enough about it. Even in anticipation of possible action U.S. Secretary of State John Kerry specifically said that the purpose of any “limited and tailored response” the United States will take is not regime change but “a diplomatic process that can resolve this [situation] through negotiation.”

Libya’s most crucial lesson therefore is that intervention requires a full game plan. That means both an entrance and exit strategy. Even the most limited of engagements can quickly creep toward something much bigger. This alone is not a reason against intervention but rather a caveat to take full responsibility for the action.

In the case of Libya, Obama was highly reluctant to lead — for good reason — and he made the right decision to support British and French partners. However, this wise tactic of “leading from behind,” omitted the formulation of a big picture vision of the long-term interests of the United States, Libya, and the West and, hence, a strategic plan for continued engagement to advance those interests. The administration’s “red line” in Syria and the pressure to act based on moral obligation are ramping up pressure to intervene, but the United States must not act without a clearly defined plan. The prevailing rhetoric of a non-committal, short-term, limited invention is a dangerous myth. Its existence among policymakers after the experience of the past decade is nothing short of a collective delusion.

The second lesson from Libya is that any action, whether limited or extensive, carries some undesirable, yet fairly predictable consequences on the ground. Intervention will empower certain groups over others even when the stated intentions are different. A simple no-fly zone engineered to help the rebels and their political institutions can actually end up strengthening actors other than the ones policymakers intended to support. For example, in Libya the no-fly zone was supposed to strengthen the rebel leadership of the National Transitional Council (NTC) and the other Benghazi-based political actors. In reality, the no-fly zone strengthened the spontaneously formed militias that arose in other places, such as Zintan and Misrata, because they were able to turn the tables on Qaddafi by using the no-fly zone as if it were the rebel’s air force. These cities’ militias developed the requisite fighting skills, command structures, and strategy to use NATO air power to their advantage while the forces of the NTC did not. And because they put themselves at the frontlines, NATO needed to protect and coordinate with them, thereby building up the political credentials of these militias.

The parallels with Syria should be quite clear. The United States will, no doubt, aim to support the Syrian National Council and the moderate armed groups, but any no-fly zone or injection of weapons will quickly benefit the most dynamic military actors, like the al Qaeda linked Jabhat al-Nusra and other Islamist elements. Therefore, if the United States is going to intervene it needs tocontinue to train directly and help its interlocutors or at least give them a chance to succeed in the internecine battles within the opposition that are sure to follow. All of this implies expenditures of money and likely deployment of additional training personnel to Turkey or Jordan.

The lack of a clear political objective was evidenced in Libya when the West intended to help the NTC gain recognition as the sovereign authority of Libya but did not help it build the institutions needed to govern the country politically. The limited intervention did produce the overthrow of a hated regime, and allowed for the opening of avenues of participation for the citizenry. Qaddafi was so awful and so loathed by the Libyan people that intervening was the right course both morally and strategically. But at the same time the dynamics of the intervention allowed ample maneuvering space for those forces that see democracy and pluralism as antithetical to their values.

After the experience of Afghanistan and Iraq, the United States was fearful of fuller engagement in the domestic affairs of another country predominantly out of concern for another wave of anti-Americanism. Yet the confusion and disorder characterizing Libya in the aftermath of the revolution has produced anti-Western sentiments among a certain strata of the population. These have grown not only out of a sense of abandonment but also because of the messaging from anti-Western forces that are spreading in the country. By not having a continued engagement strategy, NATO ended up fostering the very same anti-Western feelings that it assumed it would ignite from a more extensive engagement. In late 2011, the Libyan people were favorably disposed to the Western countries and viewed them as allies and liberators. Hence, the supposedly culturally sensitive, “let the Libyans do it themselves” approach was a gross miscalculation.

The third lesson from Libya concerns the benefits to be derived from having as broad a coalition as possible, while being aware that some of those involved may push for meaningfully different outcomes. One positive aspect from the case of Libya was the regional goodwill and political legitimacy conferred on the mission by the participation of Arab allies and Turkey. However, beyond training Syrian rebels and supplying them with arms, Arab countries are unwilling to get involved in Syria, lest they risk a greater regional conflagration or be seen as doing U.S. or Israeli bidding. Working with Arab allies in Libya also showed that Qatar or Turkey, for example, had an arguably different agenda for the future of Libya post-Qaddafi, and some of their efforts pulled the resistance in an Islamist and anti-Western direction. While the United States should continue to work with Qatar or Turkey in Syria it should not let them shape the political trajectory or prejudice the U.S. choice of interlocutors and partners.

So where does this leave the United States and other possible partners? The Syrian situation is far more complicated than was Libya. Furthermore, Libya demonstrates that simple answers are not answers. If the United States intervenes in Syria, it must do so with the understanding that only a concerted multi-power long-term involvement and presence — with the approval of the Syrian people — can create an outcome that the region and the world will appreciate.

Obviously, the United States can announce that its “intervention” is limited to preventing and discouraging Assad from using chemical weapons again. But even if that “short-term” operation succeeds completely in achieving its stated “limited” objective, Syria will still continue its descent into chaos. This will have important, negative ramifications throughout the Middle East and perhaps beyond. If the only super-power involved, the United States will be increasingly blamed and dragged into further conflict in order to fill the vacuum and restore order.

As Libya demonstrates, a justified limited intervention can turn out worse than a more comprehensive, well thought-out one. The wrong kind of intervention would leave Syria destabilized indefinitely, with disastrous consequences for Syria’s neighbors, as well as for U.S. national security.

This article originally appeared in Foreign Policy on The Middle East Channel, September 4, 2013.

Karim Mezran is a senior fellow with the Atlantic Council’s Rafik Hariri Center for the Middle East and a professor at SAIS-Johns Hopkins. Jason Pack is editor of The 2011 Libyan Uprisings and the Struggle for the Post-Qadhafi Future and former Fulbright Scholar in Syria (2004-5). Haley Cook is director of research of Libya-Analysis.com.