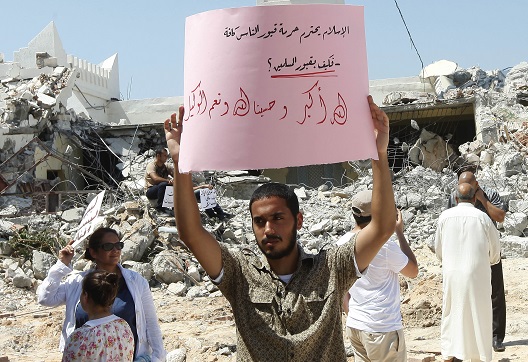 The current fight against the Islamic State (ISIS, IS, Daesh) and Salafi jihadis in Libya should not distract from other Salafi groups in Benghazi and Tripoli that are spreading and enforcing anti-democractic and illiberal views and practices. The Madkhali Salafist-inspired groups are slowly gaining ground via both the al-Tawhid Brigades in the east under Field Marshal Hafter’s umbrella, and the Rada forces in the west that support the UN-sponsored Presidential Council. Both strands adopt an ideology that grants the ruler unquestioned authority, is intolerable to opposing views, and encourages the use of force against opponents. Such negative stances on elections and separation of power put Libya’s political process at risk.

Madkhalism—named after the Saudi Sheikh, Rabi al-Madkhali—was invited to Libya in the 1990s by Muammar Qaddafi to counter the jihadis and Muslim Brotherhood. Their belief in unquestioned obedience to authority and their objection to free elections and democracy make them an important asset to autocratic rulers. In addition to providing ready, loyal bodies, gaining the allegiance of Madkhalists gives rulers a veneer or religious respect that buffers against other groups that attempt to gain legitimacy via religion. Hence, the movement provided an important means for Qaddafi to gain religious credibility and counter groups, such as the Muslim Brotherhood, that rely on religious authority.

Like other groups in Libya, Madkhalists have formed separate brigades that fight for different sides. There are three main militias. In Benghazi, the al-Tawhid Brigades fight for Haftar. They were formed by Izz al-Din al-Tarhuni. In February 2015, Sheikh Rabi al-Madkhali issued a fatwa forbidding participation in the battle between the Misrata Dawn coalition and the largely secular Operation Dignity forces led by General Khalifa Haftar. However, in 2016 Sheikh Rabi al-Madkhali issued a fatwa highlighting the need for Madkhalists to join Haftar as Libya’s legal guardian and to fight with him against Libya’s enemies—the Muslim Brotherhood and terrorist groups that they consider ideological foes. Madkhalists in Benghazi have their own militias, the al-Tawhid Brigades, but they also have directly joined the so-called National Army led by Field Marshal Hafter. In the last few years, Madkhalism increased its followers by dominating the religious discourse, attracting unemployed youth to Madkhali brigades where they receive military privileges and good salaries from Saudi Arabia. These salaries combined with other privileges allowed Madkhali brigades to gain significant military capacity.

The second main Madkhali militia works with the UN-supported government of Fayez Serraj in Tripoli and is known as the Rada Special Deterrence Force. This militia is led by Abdelraouf Kara, one of the main Madkhali leaders in Tripoli, controls most of the capital, and acts as a local law enforcement authority. Aside from the ideological bond, there is no apparent connection between the Madkhalists of the east and those of the west. Kara and his group in Tripoli swore allegiance to Serraj’s Government of National Accord (GNA). However, they are waging war on Libya’s Grand Mufti, Sadeq Al-Ghariani, due to his Sufi/Salafi scientific stance that is perceived as apostate by the Madkhalists. Al-Ghariani is aligned with the Government of National Salvation that is led by Khalifa Ghwell, an opponent of both the GNA and Haftar.

The third block is the Madkhali group of Misrata forces, known as the 604th Infantry Battalion. The group was formed in 2015, after ISIS killed a popular Salafi cleric named Khaled bin Rajab al-Firjani for speaking out against the terrorist group and refusing to let its members use the Cordoba mosque. Al-Firjani’s brother formed the 604th Battalion and joined the coalition against ISIS known as al-Bunyan al-Marsus, which eventually drove ISIS out of Sirte in 2016. Although the 604th Battalion is mainly composed of Misratan fighters, it also has fighters from Sirte, Bani Walid, Tripoli, Zintan, and Sabha, illustrating the strength of its ideological draw.

The fact that the Madkhalists are fighting for three separate sides shows that they have competing loyalties, particularly between their local tribes and the Madkhali sheikh, the wali al-amar, whom they are religiously bound to follow. If they were to unite, they would form a powerful bloc with a conservative ideology. Yet, it is not clear if they would be able to actually do this. For example, their religious allegiance should have led them all to fight for Haftar when Sheikh Rabi al-Madkhali issued his 2016 fatwa, but instead, their local allegiances dominated.

However, the strength of their ideological bond should not be underestimated. In 2011 Sheikh al-Madkhali issued a fatwa urging his followers to not support the revolution, and as a result, many of his followers either remained with the Qaddafi regime or avoided fighting for either side. Only a small minority joined the opposition. Since then, Madkhalists have steadily gotten more involved in the conflict. Fred Wehrey notes that other armed groups that work with the Madkhalists often doubt their true intentions, pointing to their “ambivalent or even supportive attitude [of the 604th Battalion fighters] toward Haftar and his campaign in the east.”

Although all sides are relying on Madkhali groups in political and military conflicts, to do so is a double-edged sword. Working with them seems like a necessary risk to the belligerent parties, but it strengthens Madkhalists in the long run. Although the Madkhalists are currently divided, their widespread influence as an anti-democratic, militarized, ideological group poses a threat to attempts to create a more open, democratic society.

Ideologically, all Madkhalists, regardless of their current political leanings, stand opposed to Libya’s more dominant Maliki school of jurisprudence. Since 2011, Madkhalists have destroyed many of the Sufis’ historic mosques, shrines, schools, and libraries. In August 2012, Madkhalists destroyed Sufi mosques in downtown Tripoli. They also bulldozed Sidi Abdul-Salam Al-Asmar Al-Fituri mosque in Zliten. Mohamed al-Madkhali, brother of Rabi al-Madkhali, issued a fatwa to encourage the Madkhalists in Libya to destroy the Sufi sites, claiming that Libyan Madkhalists are the true successors of Prophet Mohamed and that destroying these sites is destroying heresy.

Madkhalists also have strong connections with the major players in Libya, and they could have a substantial role and influence in Libya if the Madkhalists in Tripoli and Eastern Libya unite under one body after the current conflict ends. Doing so, though, would require that the Madkhalists work with like-minded groups. Whether or not they are willing to do so remains unclear, especially given their ideological aversion to political participation. Still, Madkhalists do not always avoid politics. For instance, after the February 11 revolution, Madkhali leaders ordered their followers not to partake in the first national elections after Qaddafi; however, compliance was not universal.

How the role of Madkhalism will play out in Libya remains unclear. The defining factor will be how strong ideology is in comparison to other loyalties. Madkhalists are supposed to be loyal first and foremost to their religious leader. A fatwa from such a leader can, in theory, drive them to fight or change their loyalties from one party to another. The greater risk seems to be the belligerent parties’ willingness to use the Madkhalists without regard for the fact that they are strengthening an ultra-conservative, intolerant ideology that stands against political participation—the antithesis of a democratic Libya.

Image: Photo: Protesters take part in a demonstration against the demolition of a Sufi mosque by ultra-conservative Salafis in Tripoli. Attackers bulldozed a mosque containing Sufi Muslim graves in the center of Tripoli in broad daylight, in what appeared to be Libya's most blatant sectarian attack since the overthrow of Muammar Gaddafi. The placard reads: "Islam respects the non-Muslim's grave, so how about the Muslims?" Photo taken August 26, 2012. Taken by Ismail Zitouny.