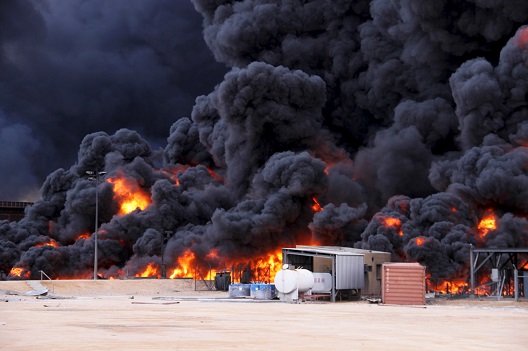 Libya risks a new escalation and a deepening of the division between the eastern region under General Khalifa Haftar and the rest of the country nominally under the control of an ever-weaker UN-backed government headed by Fayez Serraj. On March 3, fighting started in the Oil Crescent, the part of Libya’s central coast where 60 percent of the country’s oil exports transit.

One week later, fighting came to the capital Tripoli where tension between pro- and anti-Serraj militias have escalated. If one adds to the mix a growing Russian role and a rampant migration crisis, there is enough to awaken Western attention. An international mediation to avoid escalation and work on a modicum of stabilization is urgently needed, lest the country slip into a humanitarian crisis and again become a breeding ground for jihadist groups.

On Friday, March 3, two of Libya’s biggest oil terminals changed hands when the Benghazi Defense Brigades (presumably loyal to the country’s mufti, Sadiq al-Ghariani) wrestled them from the anti-Islamist Libyan National Army headed by Khalifa Haftar, who is backed by Egypt, the United Arab Emirates (UAE) and, increasingly, Russia. Eleven days later, General Haftar regained control of the terminals but the parliament loyal to him, the Tobruk-based House of Representatives, has made it clear that it will no longer share the revenues of the oil sales with the government in Tripoli. Under UN-resolutions, Libyan oil can only be sold by the National Oil Company (NOC) based in the capital. Trying to sell it through other channels like the parallel NOC based in Benghazi, means incurring international sanctions – and not selling the oil at all. Without oil sales, Libya’s output will drop, knocking down government revenues and therefore accelerating the fiscal collapse of the country.

The offensive on the oil fields by the Benghazi Defense Brigades, has accelerated the collapse of any meaningful channel of communication between the east and west of the country. The House of Representatives has withdrawn from political negotiations with Tripoli. Haftar has promised to eradicate the Benghazi Defense Brigades from central and eastern Libya, leading to a potential escalation in the triangle between the city of Sirte, recently liberated from the Islamic State (ISIS, ISIL, or Daesh), the Oil Crescent, and the city of Jufra, strategically located at the centre of the country.

Western Libya is too divided now to even think of negotiations for a comprehensive deal with Haftar: in Tripoli, militias nominally loyal to Serraj have defeated those loyal to the rival National Salvation Government of Khalifa Ghwell but could soon clash with armed groups from the city of Misrata, who also nominally back Serraj.

At this point, none of the belligerent parties can militarily outmatch the others, but each side is in a position where it thinks it can win and is unwilling to back down. It would not be unlikely to see a faction deciding to block all exports rather than compromising with its opponents. In this situation, a political deal on the future institutional asset of the country that brings together all these actors may prove elusive for weeks if not months while in the meantime fighting on the ground escalates and Libya slides into division and fiscal collapse. This does not mean a political process is not needed, but rather that other matters take precedence.

First, the United States, Europe, and regional powers involved in Libya such as Egypt, the UAE, Algeria, Tunisia, and Qatar should put in place a de-conflicting mechanism, cooperating where possible with Russia. Major fighting between the east and the west of the country should be avoided by keeping channels of communications open. These countries should also push UN Secretary General Antonio Guterres to overcome the impasse on his Special Representative for Libya created by the US rejection of Salam Fayyad so that the UN can play an active role in setting up a political process.

Second, as demonstrated by recent fighting, Libya’s oil wealth and its distribution remain one of the core drivers of conflict. The US and Europeans should push Prime Minister Serraj to offer to Eastern Libya a Libyan economic agreement on how to share oil wealth and energy installations in a way that benefits the Libyan public and stabilizes the country. In other words, this agreement would entail drafting of a new social contract between the people and state based on consensus around the distribution of the main resources. This is obviously a long-term goal, while it is clear that, in the short term, more immediate measures are needed. A neutral body derived from the Petroleum Facilities Guards should be deployed around oil installations, and US and EU sanctions should be issued against those who try to sell oil outside of what UN resolutions mandate. Specifically, UN resolutions state that Libyan oil can only be sold if the profits go to NOC Tripoli. This would make a significant contribution to de-escalation, which is the pre-condition for a stabilization process and an effective fight against terrorism and other threats.

Finally, the militia rule in the capital is incompatible with any stabilization effort and threatens any Libyan government while hampering any form of international assistance. Disarmament of militias since 2011 has proved elusive in the absence of a strong government but the international community should push for a Libyan-led agreement to free Tripoli at least from heavy weapons, pushing militias to stock them outside of civilian populated areas.

The alternative is the resumption of fighting to the levels of the summer of 2014, which caused significant human and material destruction, provoked the collapse of state structures, and eventually led to the establishment of ISIS in the country. The time for leadership and mediation is now, lest we find ourselves again admitting further down the line that we have failed Libya in the key moment as many policymakers now say about the period after the 2011 intervention.

Karim Mezran is a resident senior fellow with the Atlantic Council’s Rafik Hariri Center for the Middle East. Mattia Toaldo is a Senior Policy Fellow in the Middle East and North Africa program at the European Council on Foreign Relations.