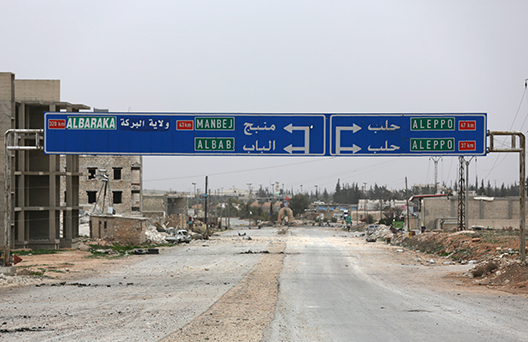 A road sign that shows the direction to Manbij city is seen in the northern Syrian town of al-Bab, Syria March 1, 2017. Picture taken March 1, 2017. REUTERS/Khalil Ashawi


If you are unable to listen to the audio, please read the transcript below:

MENASource: Can you describe the deal reached between the SDF and the regime? How did they reach the agreement?

Aaron Stein: Obviously the agreement is so new that a lot of details are fuzzy, and the play-by-play about how it came about isn’t really out there for those of us who are already working on the ground following it. What is clear, if you can confer based upon the moves that were taking place inside of Syria in the past week, or really in the past two weeks, is that as the Turks began to consolidate their military positions around al-Bab and then threaten Manbij, you had a concurrent move by regime forces south of al Bab, and they eventually linked up with Manbij. So, you have a little strip, a ribbon if you will, of regime forces. By most accounts, this touched off some negotiations between the two sides, facilitated by Russia, to bring about essentially a ribbon of the Syrian regime and SDF forces basically encompassing that little thumb of Kurdish SDF-held territory west of the Euphrates.

To be honest, I was a little caught off guard in the morning about this happening. I did expect there to be a bit more clashes before this happened, but in retrospect, looking back on it, we should not have been that surprised for two reasons. One is that the regime and the Afrin YPG, the YPG being sort of the main component of the Syrian Democratic Force, have reached a similar agreement, or sort of similar status quo, southwest of al-Bab beforehand. Two, the Turks have been telegraphing their intent to go to al-Bab since September, and so the Manbij military council, of which the SDF is the militia, had ample time to prepare for this. And so this protects Manbij, at least sort of notionally, because Turkey would have to risk escalation with the regime and probably some embedded Russians if they want to fight through it. It’s certainly a calculated risk they could take.

In terms of the broader picture about what Turkey can do now militarily – I think the Turks are stuck in Euphrates Shield territory. They may be able to consolidate and push out a little bit farther into Manbij or on the other side to Tel Rafaat, both of which would be heavy fights, and now you have the ribbon of the buffer zone. But in terms of the trajectory of the Syrian conflict, let’s even run out an optimistic scenario, where they consolidate in Tel Rafaat and Manbij, they reach an agreement and they were able to move through there, those are basically the limits of where they can go. And on the other side of this, you have US cooperation with the SDF in Raqqa, and then you have Russian cooperation with the regime out to Deir Ezzor, and I think the most expected would be something up in Idlib. And so you see multiple moving pieces here, the Turks just one, and then this little ribbon just being a subcomponent of the Turkish-SDF relationship.

MENASource: Did Turkey have any part in the deal? Were they aware the deal might happen?

AS: I don’t think Turkey had any part in the deal. But do I think that they had to have an inkling about what might be going on? Absolutely. Turkey is the most consequential actor in the Northern Syria civil conflict, and to think that they don’t have a good sense of what is going on amongst the various different actors there, I think doesn’t give them enough credit.

I would also suspect that the United States was at least given a couple days of heads up from the Manbij military council and the SDF, because there are US forces in Manbij. Now, I think there is a difference between letting somebody know that you’re about ready to reach arrangements to try and block a Turkish incursion into Manbij through cooperation with the regime, and giving the United States a vote in whether or not this is going to move forward. Same with Turkey, they may have known this was coming, but there’s not all that much they can do about it unless they risk major escalation.

MENASource: On that note, how might this deal affect Turkey’s relation with the regime?

AS: Turkey finds itself in a very, very difficult position in Syria. On the one hand they have had nominal success in taking territory in Euphrates Shield, and they have managed through Euphrates Shield to achieve the three objectives of military intervention. One is to prevent the consolidation of Kurdish territory along its longest land borders, two is to push Islamic State off of its border, and three is to create a little pocket for refugees inside of Turkey to come back. And underneath that is that—Syrian rebel groups, insurgent groups in Idlib, who are uncomfortable with the growing presence, the strength of (for lack of a better term al-Qaeda in Syria)—can then migrate to cross into Euphrates Shield territory through Turkey, to try and create this kind of nowhere bastion of the elements of the anti-Assad opposition.

Within that, the problem is that they are also the junior partner to Moscow and to the United States—sort of a power balance geopolitically. And so you have agreements with Moscow that are caught in Astana, Kazakhstan, they are nominally military focused, they are trying to freeze a conflict, Turkey tries to keep politics out of it, but an issue with communiques at Astana One—they didn’t reach an agreement for Astana Two—you wed yourself to a political trajectory along Moscow’s vision for a future Syria, and I think all people would say that includes Assad. But then at the same point, Turkey is trying to save the anti-Assad opposition by moving them into Euphrates Shield, and on top of all of that—Euphrates Shield is creating rival governing institutions to that of the Syrian central government, which, if you were to play out the scenario long enough, indirectly detracts from the outcome that they are trying to achieve politically—which is a strong Syrian central government without Assad, because of concerns about the Kurds east of the river.

So you have this big divergence between Turkish political goals and military goals inside of Syria, and the Assad question is smackdab in the middle of all of it. I think the answer to your question is they don’t know what they are going to do with Assad, they have not figured it out yet. But now their main focus is preventing the consolidation of Kurdish control inside of Syria, and they will deal with the Assad question later.