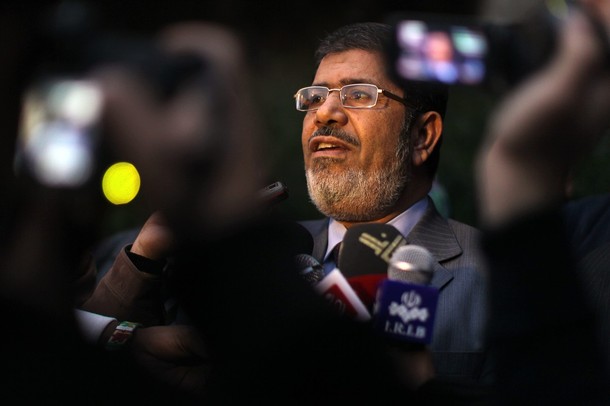 This piece was first published in the Washington Post

"On the basis of mutual respect” was how the White House characterized President Obama’s pledge to work with Egypt’s newly sworn-in president, Mohammed Morsi , in a phone call congratulating Morsi upon his election last month. It was a well-chosen phrase, one that undoubtedly resonated with Morsi and others in the Muslim Brotherhood, who have long chafed at the patron-client relationship they believe former president Hosni Mubarak cultivated with the United States. Morsi, however, is by no means the only player with whom the United States will deal. Military leaders, who have run the country since Mubarak was ousted in February 2011, will yield only partial executive power to Morsi and have reclaimed legislative power after dissolving the country’s first freely elected parliament.

So how does the United States deal “on the basis of mutual respect” with this unwieldy new Egyptian government amid a power struggle between a hobbled Islamist president and military leaders determined to retain control at least until there is a new constitution that protects military interests?

Showing respect to Egyptians will mean showing willingness to rebalance the U.S.-Egyptian relationship toward the free trade and investment that Egypt desperately needs to provide jobs for its largely youthful population of more than 80 million, and away from a large military aid package that benefits relatively few. Ideally, Washington should have an excellent military relationship with Cairo, but not at the expense of the civilian population’s interests. That means moving away from locking in military assistance to Egypt a decade at a time. Instead, the United States should decide how much aid to give annually, based on Egypt’s real defense needs and the extent to which the generals are allowing a real democracy to be built.

Another way to show respect for Egyptians is to stand up for democratic values more clearly than the Obama administration has so far. For more than a year, senior U.S. officials were almost completely silent while the interim military leaders led a disastrously bad post-Mubarak transition characterized by human rights abuses, an ever-changing political timetable, a nose-diving economy, harassment of civil society groups and politicization of the once-respected judiciary. After Congress imposed conditions on further U.S. military aid late last year, the administration waived them in the spring, expressing confidence in Egypt’s military rulers that turned out to be misplaced.

Secretary of State Hillary Clinton made a good start on reversing this trend last month when — during a tense interval when military leaders seemed poised to deny Morsi his electoral victory — she said in an interview with broadcaster Charlie Rose that it was “imperative” that Egyptian military leaders “turn power over to the rightful winner.” We’ll never know for sure, but Morsi might well owe his office to her (though the tens of thousands of angry Egyptian demonstrators in Tahrir Square also helped). While Clinton and Obama cannot be expected to micromanage the Egyptian transition, they clearly can be effective when they speak up, and they should do it more often. Priorities should include urging the military to keep out of the writing of a new constitution and allowing the return of parliamentary life.

And if mutual respect is a two-way street, what about getting some back from Egypt? Clinton laid out some expectations in recent interviews: that Morsi stand up for the rights of all Egyptians, including women and Christians, and that he form a government that includes non-Islamists in prominent positions. What this means is that the United States expects respect from Egypt for certain universal human rights, as well as for international agreements such as its peace treaty with Israel, as part of a new relationship.

Establishing mutual respect will also mean resolving the ugly legal case against American nongovernmental organizations trumped up by the military-led government last year. It is still languishing in the courts and hampering all U.S. economic and democracy assistance to Egypt. Morsi can fix this easily and without interfering with the judiciary, simply by instructing the relevant ministers to approve the registration applications of the American organizations, which were submitted years ago. But Washington will need to be much more attentive than it has been heretofore if it wants to convince Egyptians that it is serious about getting respect as well as giving it.

Michele Dunne is director of the Council’s Rafik Hariri Center for the Middle East.