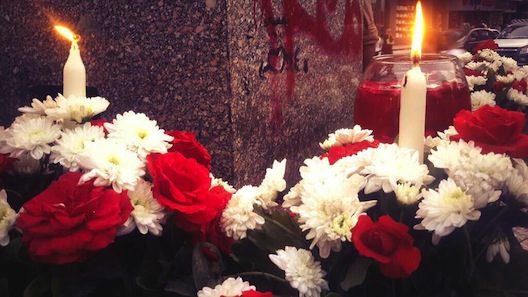 On the third anniversary of the Maspero massacre, the Maspero Youth Union called for a silent candlelight vigil to commemorate the death of more than twenty-five peaceful protesters and to demand the prosecution of the perpetrators of the crime. In 2011, the predominantly Coptic crowd, protesting an attack on a church in Aswan, was attacked by unknown assailants. When military and security forces intervened, the turned their ammunition and APCs on the demonstrators. Yesterday’s vigil took place in Cairo’s Shubra district, the very same starting point of the fateful protest on October 9, 2011.

Protesters hung a large banner, bearing pictures of those killed. The caption beneath read ‘remember them,’ in Arabic. This was later chosen as the slogan of this year’s anniversary. As dusk fell, they lit candles beside the flowers, singing national songs and hymns. A large security presence could be seen across the street, suggesting the protest was coordinated with police.

Shortly after the protest started, a minor quarrel broke out. One man said the massacre was a conspiracy planned by the Muslim Brotherhood to cause a rift between Copts and the military. People lashed out at him. “We know who did it,” in reference to the military, another shouted angrily.

In addition to photos of the slain protesters, a banner bore the images of four members of the then-ruling Supreme Council of Armed Forces (SCAF), demanding their prosecution. The poster was conspicuously missing the image of one SCAF member. Egypt’s President Abdel Fattah al-Sisi was the head of military general intelligence at the time of the massacre. As I approached it to take a picture, I told the young man holding it: “Someone is missing.” He smiled and nodded without commenting. However an elderly woman, and a protest organizer, overhearing me, said: “Who do you mean? You mean Sisi? No, these four are the ones responsible.” Not wanting to cause any trouble, I remained silent.

The organizers of the protest had stressed that no partisan banners or chants would be allowed, presumably to avoid clashing with security. Instead, they sang Christian songs about martyrdom.

Despite the precautions, a group of protesters began to chant anti-military slogans. “Down with military rule” and “Always remember, soldiers killed our brothers” could be heard at the protest. A clear rift emerged amongst those present. In response, the protest organizers raised the volume on their speakers to drown out the chants, but to no avail. They then tried to convince them to stop, but the group, which was predominantly composed of young people, refused, reminding the organizers of sectarian incidents Copts have faced in the past three years, as recently as September. In mid-September, Minya’s Jabal el-Tair, police raided the homes of dozens of Christians, beating and arresting them, after Coptic residents protested the disappearance of a Christian girl in their village. According to the police, she left of her own accord, and converted to Islam willingly.  Last year, under former President Mohamed Morsi, the Coptic cathedral in Cairo was tear gassed by police forces, for the first time in Egyptian history, under the watch of current Minister of Interior Mohamed Ibrahim—the only ministerial holdover from the Morsi cabinet.

Unable to find a consensus, the protest split into two groups, one wary of anti-regime chants, and the other unleashing chants against everyone, including President Sisi.

As the anti-military protest continued to grow, the organizers decided to end the vigil, fearing clashes with security. Arguments and chants by angry youth continued despite calls for everyone to leave.

Before leaving, I had a final exchange with the woman who had eyed me suspiciously. As she asked me to leave, I pushed back again on the anti-SCAF banner.  “I still believe someone is missing,” I said. She answered, “They were all responsible for the massacre. Let’s first put these four on trial before going after the rest.” Contrary to the first time we spoke, she sounded hesitant.

The vigil reflects how the Coptic community is still seeking justice and that the future looks, for a large portion of it, dimmed and uncertain. It also highlights the wider generational gap in Egypt between the youth who still believe in the January 25 revolution and its goals and the older generation, which leans more towards political and social stability. This gap is evident within the Coptic community, one which certainly cannot be treated as a homogenous group, as it struggles to find its place under a new regime. It also shows the younger generation’s ability, with its defiance, to potentially lead other factions of the society to rethink their traditional views.

Mina Fayek is a Cairo-based blogger and activist. He can be found on Twitter:@minafayek or his blog: http://minafayek.blogspot.com