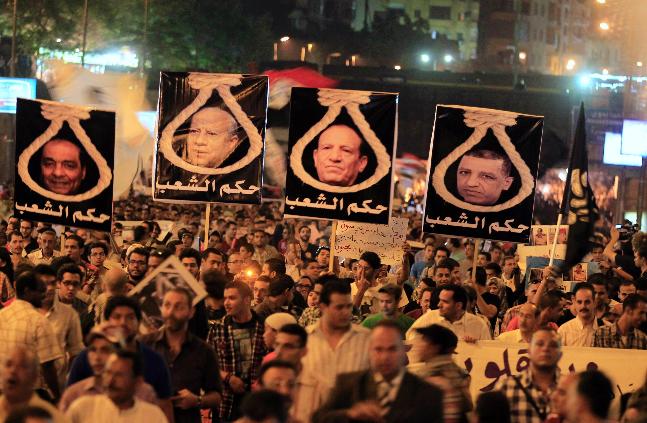 Of the many dark days Egypt has witnessed post-revolution, because of an archaic, failed state whose back is to the wall, lashing out at all and sundry, the Maspero massacre would most probably count as the darkest of them all.

28 mainly Coptic Christian protesters were killed on October 9, 2011. The manner in which they were killed speaks to a brutality and callousness that still leaves one shell shocked a year on. Besides the use of live ammunition, military APCs ran over protesters in front of the radio and television building in Maspero.

It didn’t end there, state television then proceeded to incite people against the protesters, claiming that they had attacked the army troops guarding the building, killing 3 it falsely stated, and exhorted honest and honorable citizens to defend the army. This led to attacks on Christians throughout the city for the rest of the night, including a siege on the Coptic Hospital in Ramses where the wounded and killed were taken. The irony was that the march was heading to Maspero to protest this very manner of skewed coverage towards Egypt’s Copts.

The then ruling Supreme Council of the Armed Forces (SCAF) went into damage limitation mode, and in a sickening twist to the tale, used the very same footage that indicted them to exonerate themselves. Panicked drivers, they claimed.

A march was organized from exactly the same starting point – the neighborhood of Shubra – to commemorate the one-year anniversary of the massacre. The mood was diminished; there was a palpable anger but also a sense of unfinished business. Again protesters marched to Maspero to challenge a state media that has not been restructured or cleansed. The SCAF generals have since been removed from their posts in a gracious manner and given medals for their service. The safe exit people warned against has happened.

Even though the Maspero massacre came as part of a series of violent incidents against Christians both pre- and post-revolution, it was a turning point in the road map of the post-revolutionary period and what it meant was that the guidelines of the post-Mubarak era had been set – in blood – and would sadly be very similar to the guidelines of the regime it overthrew. Murder of civilians by the state, limited or no accountability, no justice for those killed. Meet the new state, same as the old state. The setback was not just in real terms of lives lost, but in the course of the country’s future, which had by then definitively diverged into a dead end.

Sherif Azer of the Egyptian Organization for Human Rights wrote in al-Badil newspaper that Maspero was the first incident in Egyptian history and the history of discrimination against the Copts that the “institutional army of the state committed a massacre against a specific sect.” According to international law, Azer contended, the Maspero massacre could be considered ethnic cleansing.

Azer also stated that “for those who don’t know how armies are run and especially the Egyptian army, not one bullet can be fired without a direct order from a commanding officer, who takes his orders from his superior and so on, up the chain of command. That makes the massacre the responsibility of those at the top, which is SCAF. And since SCAF was the actual ruler of the country at that time, that makes the Maspero massacre the only incident in the history of contemporary Egypt that Copts were killed on orders from the rulers of the state and carried out by its army.”

A year on, and the chants are just as urgent against the now-ruling Muslim Brotherhood as much as the military. It wasn’t the Brotherhood that committed the massacre but involving it in some sort of culpability is possible for two interconnected reasons. First, now that they hold the reins of power they have still not sought justice for the martyrs who died on the Brotherhood’s path to power, and secondly – and more pertinently – because it had been decided even back then that the Brotherhood would play the political game within the parameters set by SCAF, the parameters of no accountability and business as usual.

That’s why the Brotherhood is considered complicit by the protesters; that is why the chants ring out against them with as much venom as against the generals. The Brotherhood aided and abetted and this would be more apparent in the following Mohamed Mahmoud clashes of November 2011 which the Brotherhood helped shut down – also with no accountability – to save their parliamentary elections.

And so when the protesters made it to Maspero, there was little sense of accomplishment. The building remains, all that it symbolizes remains within it and the killers have walked away with medals. That’s why there is still a sense of anger, and yes, failure. For justice has not yet been attained. What remains are fragments in tortured memories of the people who witnessed that day first hand.

Head of the Egyptian Initiative for Personal Rights Hossam Bahgat had written the day before the anniversary, “I advise myself and you. Try and remember the martyrs of Maspero without reliving the events. Resist the flashbacks. Don’t sit alone. Don’t blame yourself. Don’t blame the revolution. Blame the murderer. The revolution continues.”

Abdel-Rahman Hussein is an Egyptian journalist based in Cairo. He is the author of the blog, Sibilant Egypt.