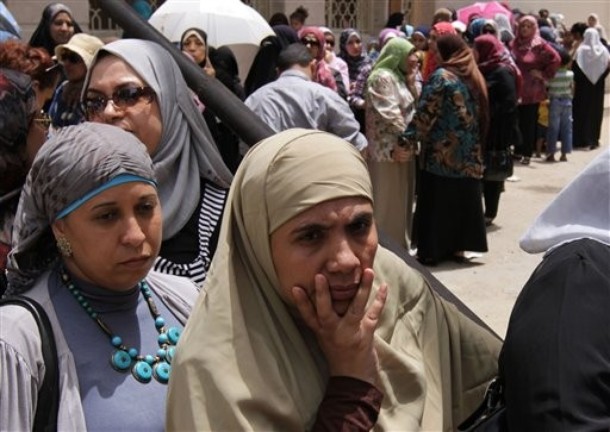 Millions of Egyptians head to polling stations across the country Wednesday to cast their ballots in Egypt’s first genuine multi-candidate presidential election. By most accounts, 30-40 million citizens (60–75 per cent of eligible voters) are expected to head to the polls on Wednesday out of a total of 53 million eligible voters.

Millions of Egyptians head to polling stations across the country Wednesday to cast their ballots in Egypt’s first genuine multi-candidate presidential election. Voters have 11 candidates to choose from, with several frontrunners leading recent independent polls: Abdel-Moneim Abul-Fotouh, a former Muslim Brotherhood leader and centrist Islamist candidate; Ahmed Shafiq, ousted president Hosni Mubarak’s last prime minister; Amr Moussa, a former Mubarak-era foreign minister and one-time secretary-general of the Arab League; Hamdeen Sabbahi, a Nasserist candidate with a recent surge in support from revolution-allied figures; and Mohamed Mursi, the Muslim Brotherhood’s candidate. By most accounts, 30-40 million citizens (60–75 per cent of eligible voters) are expected to head to the polls on Wednesday out of a total of 53 million eligible voters.

On the first day of Egypt’s first post-Hosni Mubarak presidential election, violations of electoral laws and fair practices are occurring sporadically across the country. Some campaigns are violating the legally mandated period of campaigning silence, but thus far, no evidence of vote rigging and vote buying has been documented. Reports have also emerged of other minor irregularities, including polling stations opening late and suspicious activities from poll workers. Several official complaints have been filed by various campaigns. Still, the election is considered fair, especially compared with past elections in Egypt.

Egypt’s army and mainly Islamist politicians have deferred talks on what powers the new president will have until after this week’s presidential vote, which is unlikely to produce an outright winner, political sources said on Tuesday. Political parties and the military had then hoped to agree on interim constitutional changes to regulate the powers of the president, government and parliament before the presidential election, but informal talks have failed to produce a deal. General Mamdouh Shahin, a member of the military council, said weeks ago that articles delineating the role of the president could be issued before a head of state is elected. But he backed down on Monday when it became clear that no agreement had emerged from a series of informal meetings between the military and political parties, including the FJP.

Analysis: Can Egypt have a president without a constitution?

Egypt is not planning to raise industrial natural gas and electricity prices again this year after cutting subsidies for heavy industry in early 2012, its industry minister said on Wednesday. The higher rates for steel, cement, glass and ceramics industries since the beginning of the year are meant to bring the government subsidy bill down from 95 billion Egyptian pounds to around 70 billion pounds, Mahmoud Eisa said. Egypt has previously resisted cutting subsidies for fear of stoking inflation and further civil unrest. But it is under renewed pressure to tackle the issue as it negotiates a $3.2 billion emergency loan from the International Monetary Fund to avert a balance of payments crisis. The IMF is expected to require a commitment from Cairo to reform its finances.

Egypt’s economy shrank by 4 per cent in the first quarter of 2012 compared to the quarter before, according to official data acquired by Ahram Online. Gross domestic product (GDP) at current prices dropped from LE377.3 billion in the period between October-December 2011 to LE362.5 billion between January-March 2012. Total investments fell by 16 per cent to LE56.1 billion in Jan-Mar 2012, down from LE66.8 billion in Oct-Dec 2011. Private sector investments made up 70 per cent of the total in the third quarter of the financial year 2011/12, up from 60 per cent in the preceding quarter. The 5.2 per cent growth figure was announced by Egypt’s Planning Minister Fayza Abul-Naga on Monday, where she cited them as indications of an improving economy under the government of Prime Minister Kamal El-Ganzouri who took office in early December 2011. But the data poorly reflect the true state of the Egyptian economy, say experts.