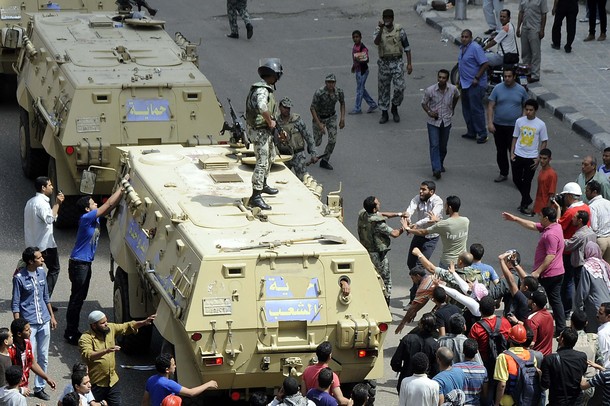 It is far too early to tell as events rapidly unfold, but today’s clashes in front of the Ministry of Defense in the Abbasiyya neighborhood of Cairo have sparked renewed fears of massive unrest in Egypt with accusations hurled in every direction between the parties involved in the conflict. With official reports claiming six deaths and unofficial reports ranging from 11-20 casualties and dozens of injured civilians resulting from attacks by what the media has called “unknown assailants,” the exact spark for the clashes remain unclear. Many of the protesters, however, not surprisingly blame the Supreme Council of the Armed Forces (SCAF) for ordering plain-clothed security forces to quash the sit-in that has blocked entry to the Ministry since April 28th. The clashes have drawn hundreds more to the scene, including some presidential candidates. With presidential elections mere weeks away, the confrontation bears an eerie resemblance to the political unrest on Mohammed Mahmoud St. last November just before the parliamentary elections.

The protest initially consisted of a small group of Hazem Abu Ismail supporters who rejected his disqualification from the presidential candidate list due to his mother’s dual American-Egyptian nationality calling for an end to military rule. Over the weekend the group came under an attack that left one dead and dozens injured. As news of the clash spread through local news and social media, revolutionaries and activists who would not normally support the “Hazemoon” (a nickname for Abu Ismail supporters) joined the protest in solidarity with the victims, their right to peacefully protest and free expression, and in condemnation of the use of violence against them. Early this morning, groups of individuals armed with rocks, firearms, and Molotov cocktails attacked the peaceful protesters who used whatever makeshift weapons at their disposal to defend themselves. Hazemoon, April 6 Movement, and Ultras youth were among the casualties. Riot police and armored personnel carriers arrived on the scene only after the clashes had gone on for hours.

An Amnesty International press release quoted one protester as saying, “There appears to be no will within Egypt’s ruling Supreme Council of the Armed Forces to prevent these tragic events. After the weekend attack, the authorities should have been prepared for the violence.”

In response to the attack, thousands of protesters have marched to Abbasiyya with chants of “Oh Tantawi, you coward; leave now!” One protester told the Atlantic Council that he and his friends will join many others who plan to spend the night. Many women have also joined the demonstration, leading some to worry about a repeat of sexual assault seen during other sit-ins. Presidential candidates including front-runner Abdel Moneim Abul Futouh and Hamdeen al-Sabbahi also joined the march to the Ministry of Defense. The Freedom and Justice Party (FJP) and the Muslim Brotherhood issued a strongly worded statement cancelling a planned meeting with the SCAF, accusing it of an “evident plot looming on the horizon to obstruct the handover of power according to the scheduled deadline of June 30” despite the denials from government Minister of International Cooperation, Faiza Abul Naga. FJP candidate Mohammed Morsi, Abdel Moneim Abouel Fotouh, Abul Ezz al-Hariry, and Khaled Ali have all suspended their presidential campaigns in the wake of the violence.

The resemblance to the violent clashes on Mohammad Mahmoud St. strongly suggests SCAF and/or Ministry of Interior complicity in the use of Mubarak-era tactics to quash the Abassiyya protest. The timing of the incident not only mimics that of the clashes that took place in November just before the parliamentary elections, but the government line insisting that presidential elections will take place as scheduled also follows the same pattern. These odd similarities lead one to ask: what – if the transitional government is in fact behind these attacks – does the SCAF have to gain with such an incident and to whom are they catering? Two possibilities arise under this assumption:

Whether planned or not, the Abbasiyya protest plays into the SCAF’s hands. Should the unrest continue, it could force the authorities to suspend the presidential elections and allow it to retain power for a little while longer. If not, the SCAF appears to successfully complete the transition despite protesters. In either case, the focus on the military’s use of foreign funds or any major piece of legislation threatening its privileged status remains diverted.