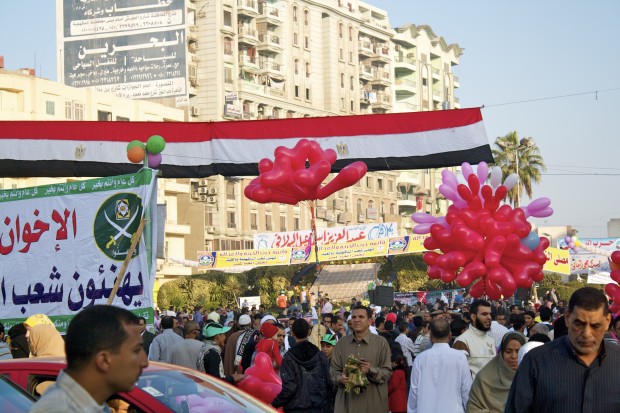 Much has been said and written since January about the influence, power and fear of the Muslim Brotherhood and its role in Egyptian politics post-Mubarak. A well organized, structured and financed organization that has grown considerably in strength since its establishment by Hassan El Banna in the late 1920s, the Brotherhood and its official political wing, the Freedom and Justice Party (FJP), is by far the most prepared political force in Egypt when it comes to the upcoming People’s Assembly elections.  But putting aside the fearful tone in local and international newspapers, anxiety within Egyptian liberal movements and western political powers, coupled with the recent electoral success of Tunisia’s moderate Islamist Al-Nahda Party (suggesting Islamist support is on the rise in the region), a much more fascinating internal battle is raging, one that could very well prove to show that fears of an Islamic Egypt are unfounded …at least for now.

The Freedom and Justice Party vs. the Brotherhood

The Freedom and Justice Party’s greatest struggle is not about the Revolution, politics, or Islam. It is a simple case of branding.  With their political and street support waning in light of their confusing rhetoric over the percentage of seats they aim to win, and their overtures in support of Sharia Law and its place in the Egyptian constitution, the Brotherhood can ill afford a slip-up as basic as this.

As candidates hit the campaign trail, competition in the streets is beginning to distinguish the political heavyweights from their less serious counterparts who have little chance of winning representation in the next parliament. Although the Freedom and Justice Party is widely assumed to be one of Egypt’s strongest and most popular political forces, the party’s inability to brand itself effectively is proving to be its biggest obstacle. In continuing to use the same logo as the Brotherhood organization on its advertising and the ongoing public and internal debate over whether to use the Brotherhood’s traditional "Islam is the Solution" slogan versus the less ideological "The Good for Egypt," the majority of voters seem unaware that the Brotherhood now carries a new name in the political arena. This is particularly true in rural areas, where the Freedom and Justice party’s campaign is being overshadowed by a barrage of Brotherhood activities, especially targeting the poor, including the hundreds of toys and kilos of meat distributed during the recent Eid al-Adha festivities. These services are nothing new to supporters of the Brotherhood, but the fact that they are continuing during the campaign season is causing confusion among voters and even some candidates who are having trouble distinguishing the new Freedom and Justice Party from the familiar Brotherhood social movement.  This phenomenon is most notable in the Upper Egypt governorates of Qena and Luxor, where the Brotherhood organization has in recent years enjoyed strong support.

The Brotherhood as an organization is undeniably popular – polls since March have consistently shown an approval rating of 30 percent – but many voters will head to the polls unaware that the group’s official political wing has adopted a new name, and as a result, they will be looking for the Brotherhood’s name on the ballot without recognizing the FJP. Furthermore, the media’s tendency to use the Brotherhood’s traditional name as a catch-all for the political party is also adding to its woes, creating a branding problem that may cause the FJP to lose ground to more liberal parties as Election Day looms.

In a large field of 52 other parties, most of which are comparatively weak and disorganized, the Brotherhood’s decision to join the Democratic Coalition – which was partially motivated by its desire to calm fears of an Islamist takeover — has failed dramatically. Having cornered smaller parties into accepting a majority of 80 percent Freedom and Justice representation on the joint lists, the coalition eventually filed their candidates in late October under the FJP’s name. However, even with the support of more moderate parties (such as al-Ghad and the Nasserites) on their lists, the Brotherhood’s traditional support base alone will not be enough to translate into a majority of seats in Parliament. This is due to the fact that Egyptian society is overall becoming increasingly moderate in its ideological orientation. Fear of the Brotherhood and other Islamists was originally manufactured by Mubarak to hold onto power amidst growing calls from a US administration pushing for democratic reform, but now this fear has become real and widespread in the Egyptian street, and many citizens are genuinely concerned about the extent to which the Brotherhood might mix religion with politics in the new system.

Many Muslims carry the same view: We do not want our religion dictated to us. Although fears of an “Islamist takeover” cannot easily be reconciled with the relatively moderate proposals outlined by Freedom and Justice Party’s manifesto – calling for a civil state, and democratic partnership with all political powers – anxiety about the Brotherhood’s political intentions appears to have shifted the majority of moderate Muslims toward the path of more centrist parties such as al-Wasat , Eladl, and the old, comfortable Wafd.

Whilst other parties remain crippled by their own fears of the Islamists, the Brotherhood continues to fail in capitalizing on the weaknesses of its competitors. Two weeks before the start of parliamentary elections, if you ask most Egyptians about the Freedom and Justice Party, the answer you’ll most likely get is: “Who?…” Others will simply confuse it with many of the new parties emerging using similar names, such as the Eladl Party and the Freedom Party, to name but a few.  If the party continues to struggle with branding and name recognition on the campaign trail, those who fear a Brotherhood victory will probably be relieved by the election results.