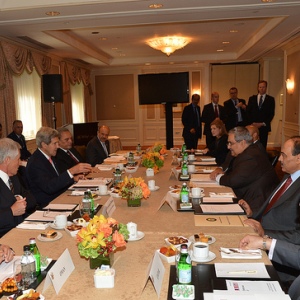 Ambassador Richard LeBaron, senior fellow with the Atlantic Council’s Rafik Hariri Center for the Middle East, recently held an online conversation with Dr. Greg Gause, professor of political science at the University of Vermont and nonresident fellow with the Brookings Doha Center. They discussed the underlying motivations that drive Arab Gulf thinking when making decisions regarding regional and national security. The perceived threat from Iran continues to inform Gulf state demands of the relationship with the United States, and they clearly perceive the conflict in Syria as part of this regional competition. Dr. Gause concludes that the security relationship remains strong, despite a history of ups and downs in US-Gulf ties.


The recent session of the the US-Gulf Strategic Cooperation Forum produced little news about the relationship, as they were overshadowed by a Security Council resolution on Syria and the meeting with the Iranian Foreign Minister. Iran, however, plays an important role in shaping Gulf security perspectives that informs this relationship. Dr. Gause described it as one similar to the US-NATO relationship during the Cold War. As relatively weak states militarily, Gulf states fear the United States could sacrifice GCC interests in the pursuit of either a stronger relationship with or increased hostility towards Iran.

Ambassador LeBaron noted that diminishing reliance on Gulf oil imports and the diminishing US defense budget also sparks fears of US disengagement with the region. But as Dr. Gause points out, the US-Gulf relationship predates US reliance on Gulf-sourced oil, partially driven by Cold War-era dynamics but also the strategic understanding that oil will remain a global commodity and is highly integrated into the global market. Effects of supply disruptions will quickly ripple through price mechanisms.

With regard to new defense assets in Gulf, advanced arms are not only a rational product of defense needs. With the increase of the price of oil, constraints of the nineties have allowed increased spending. Dr. Gause notes that the main threat to the Gulf that has emerged today remains internal instability exploited by external powers, not typical state-state conflict. New high-tech weaponry however, maintains a fundamental deterrence against this limited possibility.

Although the United States has largely ignored Iraq since its withdrawal, the importance of Iraq in Arab Gulf security has not diminished. Dr. Gause remarks how “Iraq is the hole in the Gulf donut.” Under the Ba’ath regime, Iraq balanced Iran throughout the 1980s and 1990s. Gulf states could once manage this balance but today Iran has enveloped Iraq’s space. Mostly out of fear, the Gulf unimaginatively exaggeratesthe Iran’s attempts to extend influence into the Gulf states. Nonetheless, the belief that the enemy is knocking at the door informs policies (such as those made in Bahrain) to counter a Shiite incursion.The primary fear is that, as Iraqi politics deteriorates, a creeping return to civil war will open the Iraq theater to regional powers trying to widen their influence, potentially threatening US allies and regional stability.

The United States and the Gulf never shared a relationship based on a broad common agenda, making a truly coordinated policy response to regional issues such as the turmoil in Egypt and Syria extremely difficult. The relationship’s bedrock remains the bilateral security relationship. Despite the divergence of policy priorities between them, Dr. Gause characterized the relationship between the US and its Gulf partners as a “Catholic Marriage”—one in which divorce is not possible, and where no other substitutes, such as China, could replace the US role. The primary US imperative in the region absent a major geostrategic shift—maintaining a balance such that no one country dominates the Gulf—will limit policy options going forward. The monarchies of the region are likely to remain intact, but Dr. Gause noted that the situation in Bahrain dictates that the US consider the safety of its forces stationed there and consider its options.