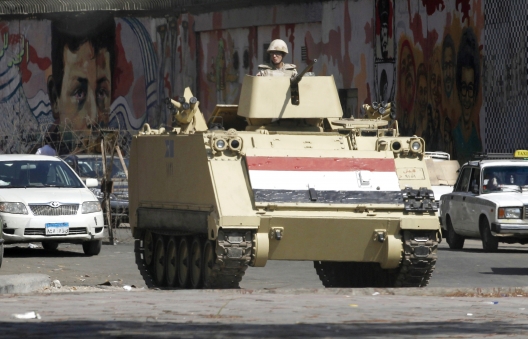 While the military trials of civilians are nothing new in Egypt, the circumstances in which Egyptians can be brought before these courts have seen a worrying expansion. From January to September 2011 alone, estimates place the number of Egyptians who faced military trials under the Supreme Council of Armed Forces (SCAF) at 12,000. A new law issued by President Abdel Fattah al-Sisi in October could likely lead to a significant rise in this figure, and raises more concerns about a further clampdown on freedoms.

According to Law number 163/2014 for the Protection of Public and Vital Facilities, issued on October 27, following the death of more than thirty Egyptian soldiers in a militant attack in the Sinai Peninsula, the Egyptian army will now aid the police in guarding “public” and “vital” facilities. For the next two years, these facilities are to be placed under military supervision and treated as military establishments. They include, but are not restricted to, power stations, oil and gas fields, railways, roads, bridges, and “public establishments of a similar nature.” Universities, seen as the last bastion of freedom of expression, were also later declared to be subject to the law. “Of course universities are included. Aren’t they public establishments?” said Minister of Justice Mahfouz Saber one day after the law was issued. Perpetrators of violent activities targeting any establishments seen to fall under the law will be referred to the military judiciary.

Less than a month after the law’s enactment, five Al-Azhar students have been referred to a military court on charges of torching a room on the university campus. Another eleven members of the Muslim Brotherhood were referred to military prosecutors on charges relating to planting a bomb in a local court, and blocking railway tracks in Kafr al-Sheikh.

While official statements insist the law aims only to counter terrorism and restore security, and also stress its constitutionality, activists and rights organizations have a different point of view. Fifteen local rights organizations including the Egyptian Imitative for Personal Rights (EIPR) and the Cairo Institute for Human Rights Studies, issued a joint statement calling on the government to repeal the law, describing it as a “masked state of emergency.” A Human Rights Watch (HRW) statement argues that even “the shaky due process guarantees” offered by regular courts in Egypt and which render a fair trial quite unlikely anyway are totally absent in their military counterparts.

The phrasing of the law is also regarded as a major drawback. HRW Middle East and Africa director Sarah Leah Whitson says, “Its absurdly broad provisions mean that many more civilians who engage in protests can now expect to face trial before uniformed judges subject to the orders of their military superiors.”

Diana al-Tahawy, head of the Transitional Justice Department at the Egyptian Initiative for Personal Rights, describes the law as “catastrophic.” Tahawy agrees that a lack of a proper definition “public and vital facilities” is problematic. She also argues that the law violates article 204 of the Egyptian constitution. “The constitution specifies that military courts are only authorized to deal with offenses directly targeting military establishments and personnel,” she said, noting a lack of objectivity on the part of judges and prosecutors in military courts since they are appointed by the minister of defense. This was precisely the concern of Amnesty International’s deputy director for the Middle East and North Africa Hassiba Hadj Sahraoui. “The disturbing truth is the government passed this law to remove any chance of an independent and impartial judge ever delivering a not-guilty verdict,” she said.

Mahmoud Salmani, a member of the No to Military Trials for Civilians movement says protestors, not terrorists as claimed by the state, are the main target of the new law. “People take to the streets and sometimes block roads or railways to protest. All those will face military trials for demanding the rights granted by the constitution and denied them by the state. The same will apply to students who protest on campus,” he said, adding that the stability this law claims to establish will never materialize as long as injustice persists.

For all the local and international criticism the law has faced, it certainly has its support in Egypt. Editors-in-chief of seventeen state and independent newspapers issued a joint statement supporting the new law and pledging “to take part in fighting terrorism” and “countering unpatriotic rhetoric” in their coverage. While the signatories stressed their respect for freedom of expression, they rejected attempts at “questioning the intentions of state institutions and undermining the army, the police, or the judiciary.”

When asked to contribute to resolving the debate over the specifications that make an establishment vital or public, the head of Military Judiciary Authority, General Medhat Ghozy only added to the mystery, saying the law applies to “Any building that is state owned or offers public services… be it a university, a factory, or a power station,” adding, “The law is broad.”

It is, in fact, the law’s ambiguity that refutes the argument that only Islamist extremists and the Muslim Brotherhood–designated a terrorist organization by the Egyptian government and whose members and sympathizers have been subject to a fierce clampdown following the ouster of Mohamed Morsi– who are the target of the law. Given the number of secular activists currently serving jail sentences for breaching the controversial protest law, it is likely that military trials will become a new frontier they must now face in Egypt.