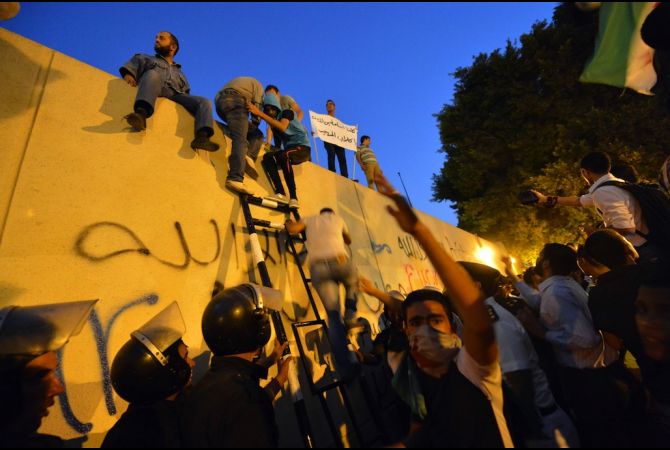 The sad spectacle on display at the US Embassy in Cairo on September 11 shows nearly everyone in a poor light. Sadder still is that most parties involved acted from a sense of virtue, but misunderstanding and prejudice corroded the good intentions.

As EgyptSource resident contributor Tarek Radwan ably described, the protests at the US Embassy coincided with the efforts of a rogue and radical expatriate Copt, Maurice Sadek, to screen a derogatory film about the Prophet Muhammad on the 11th anniversary of the September 11 attacks in New York.

Wesam Abdel Warith, the president of a popular Salafi TV station, al-Hekma, responded by calling for a demonstration at the US Embassy. He was joined by another Salafi sheikh, Abu Yahia, who in 2011 was a key instigator for escalation of an alleged Coptic female convert to Islam who was kidnapped by the church. This incident led ultimately to the attack and burning of churches in Imbaba, Cairo, in May of the same year.

Several hours before the demonstration began, the US Embassy released a press statement (first deleted from Twitter and, later from the website) rightly condemning the film on grounds of incitement, but in labeling it ‘an abuse of the universal right to free speech’ appeared to give greater importance to ‘religious feelings’. Karim, a participant in the protest, read it this way, praising the US ‘apology’ and stated freedom ends where it affects the freedom of another, even in belief. The US administration in Washington later distanced itself from the statement.

Further misunderstanding comes from conservative US media which labeled the storming of the embassy and burning of the flag as the work of ultraconservative Salafi Muslims. It is true Salafis called for the protest, but the active aggressors against the embassy were youthful soccer fans who are always itching for a fight and have been active in all revolutionary demonstrations. Later, when one tried to burn another US flag he was shouted down by older Salafis. On the whole the protest was calm and peaceful, hardly an outpouring of unrestrained, chaotic anger.

Wider video of the protest taken one hour after it began, and about twenty minutes after the flag was burned, show most people simply standing around:

This video from the telegraph depicts a wild scene focused on the burning of the flag.

Indeed it was so, but outside this circle, demonstrators simply chanted. Extending the circle further would reveal more passive supporters, present but not enraged.

I was at the protest from its beginning gathering at the American University in Cairo through its march across Tahrir Square to the US Embassy, about two city blocks away. I left around 7:30pm, with the crowd significantly thinning. Therefore it was with surprise that I read the news later on that the Egyptian army pacified the remnants of the protest by surrounding the embassy.

The stranger inference is that the embassy was not surrounded from the beginning. The protest was announced in advance, and yet Egyptian riot police were present throughout the demonstration. Yet it was the army, absent the entire time, which secured the premises.

The US Embassy complex is surrounded by a high wall lining almost entirely the adjacent street. The entrance is located in the center of the wall. Black clad police with helmets and shields lined the wall to the right of the entrance, but yielded the left side to protesters. Essam, an older Salafi protester, told me the police deferred to the ‘Islamists’ to keep the youth under control.

The greatest misunderstandings came from these participants, revealing the false or partial knowledge displayed by many. Abdullah, a son of the blind sheikh, Omar Abdel Rahman, imprisoned in the US for his role in the 1993 World Trade Center bombing, said the film was “being shown on every TV channel in America”. He likely repeated what he heard from others, but he repeated it with conviction. Clearly many believed the offense to apply to the whole nation.

Ayman, another participant, stated proudly he came to oppose the film, saying, “We must respect all prophets – Muhammad, Jesus, and Moses.” Yet without a hint of self-awareness he continued, “But the Gospel is corrupted, and the true one has not existed for a thousand years.“ Little did he sense how offensive such a statement would be to many Christians, while arguing against offending the sentiments of Muslims. Others condemned Christians as ‘worshippers of the cross.’

Meanwhile, a small group of Coptic protesters went largely unnoticed, though later praised by the Muslim Brotherhood. “I stand here with you and defend you against those who insult you,” stated Rafik Farouk. “And I will await the occasion when you will stand with us.”

Consistently the crowd shouted, ‘With our lives and blood we will redeem you, oh Islam.’ Muhammad, another son of the Bblind Ssheikh, explained, “For any offense against Islam, the Muslim has the right to defend himself against the one who says it, and this slogan displays his love of his religion

“Everything has its time and place. It makes no sense to issue simple good preaching during jihad. If someone is attacking you, you resist and fight back, you do not just say a good word.”

Another participant in the protests, Mustafa, who had returned to Egypt after living fifteen years in Brooklyn, commented further. “Those Copts making this film should be killed.”

The sad fact is that so few involved in this episode, whether gathered at surrounding the embassy or abroad, exhibit a will to understand and appreciate the other. For his part, Muhammad Abdel Rahman acknowledged the legitimacy of debate. “A Copt in Egypt may stand publically and state he does not believe in Muhammad. But there is a difference between discussion and insult.

Yet where is the line to be drawn? What Muhammad might allow Mustafa might murder. Both act from the virtue of principle, yet each is open to the condemnation of fellow Muslims. Such difference in interpretation is witnessed in all actors.

As some suggest, is the Obama administration redefining religious freedom and showing excess deference to an Islamic understanding? Is the political right engaged in a propaganda campaign against Muslims, as a tool in the upcoming elections? Are Islamist activists looking for opportunity to create an external enemy in their effort to exploit the religious sympathies of their citizens for political gain?

The above is simply speculation, however worthy. My experience at the embassy, however, showed sincere Muslims aggrieved in their faith, and enthusiastic kids pushing the limits. The fact that both should be questioned is a given; that the sovereign territory of the United States was transgressed is a crime. That this happened independent of the vast majority of Egyptians is a fact.

The test will come on Friday, when Islamist groups, including the Muslim Brotherhood, have called for more demonstrations against the film. Meanwhile, their political arm the Freedom and Justice Party, described the film as “a failed attempt to stir strife between Muslims and Copts.”

These rallies will only cement the ill image many Arabs and Westerners have of one another. The former see the latter as irreligious libertines, while Muslims get labeled as oversensitive fanatics. It is a sad exchange, overcome only through awareness, acceptance, understanding, and respect. Will wiser heads prevail? Humankind is capable of great virtue, but it is easily marred.