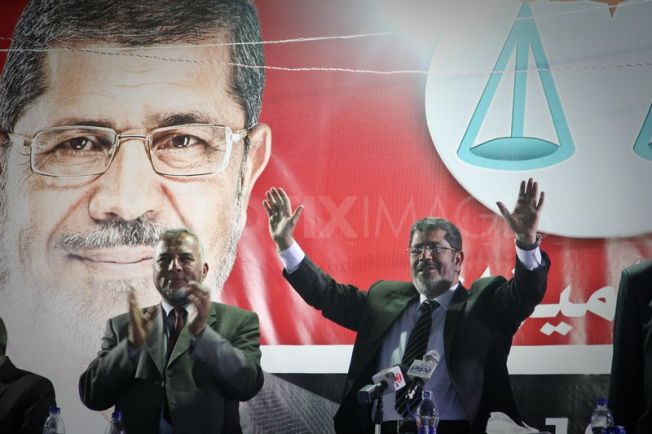 With the upcoming run-off election less than two weeks away, political forces in Egypt are scrambling to consolidate influence over what remains of the muddled political transition. Revolutionaries and secular liberals across Egypt have rejected both Muslim Brotherhood candidate Mohammed Morsi and poster-boy-of-the-former-regime Ahmed Shafik as their future leaders, but they fear the resurgence of the counter-revolution’s “deep state” infinitely more with Shafik at the country’s helm. As a result, some of these forces have reached out to the Morsi campaign in an effort to extract concessions and guarantees surrounding his potential rule in exchange for their support. Although Morsi and the Muslim Brotherhood have rejected any pre-conditions for public support of Morsi’s campaign, the recent verdict surrounding Mubarak and his former aides introduced a new variable and possibly a reformulation of the liberal-Islamist relationship.

Secular leaders of the Egyptian Social Democratic Party, chairman of the lawyer’s syndicate Sameh Ashour, and constitutional jurist Dr. Mohamed Nour Farahat drafted a “National Consensus Document” to present to both the Shafik and Morsi campaigns to guarantee certain principles including the formation of a coalition government that would represent all political forces, including youth, women and Copts, and announce the name of their prime minister before the run-off. Ex-presidential candidate and moderate Islamist Abdel Moneim Aboul Fotouh also met with Morsi to discuss similarly inclusive principles primarily focused on the Constituent Assembly but also suggesting a coalition government headed by a public figure outside the Muslim Brotherhood or Freedom and Justice Party (FJP) and that the president remain nonpartisan.

Despite initial signs that the Morsi campaign would align in some way with liberal forces and rumors of courting Mohamed El Baradei for some kind of partnership, Mahmoud Ghozlan, spokesperson for the Muslim Brotherhood, condemned the political demands placed on Mohamed Morsi in exchange for support in the runoff election – going as far as to characterize it as “extortion.” He dismissed accusations that Morsi’s verbal guarantees meant little. On the one hand, one can hardly blame secular liberals for remaining distrustful of the Freedom and Justice Party’’s candidate given the duplicity shown by the party throughout the transition, first by reneging on assurances that it would run for only 40 percent of the seats, then breaking its promise to refrain from fielding a presidential candidate, and most recently by presiding over the formation of an Islamist-dominated constituent assembly that was forced to disband. On the other hand, the Brotherhood’s rejection could hardly come as a surprise given the arithmetic of the various voting blocs that are in play for the run-off vote.

All things considered equal (as difficult as it is to imagine in Egypt’s transition) between the first and second round of elections, Shafik’s room for growth pales in comparison to Morsi’s. With the Muslim Brotherhood suffering from a lack of popularity in the lead up to the first round, one could assume that the nearly twenty-five percent of the vote for Morsi represent the die-hard supporters who will return for the runoff. Combining a majority of Abdel Moneim Abul Futouh’s support, a minority of leftist Hamdeen Sabbahi voters, and all of Islamist writer Selim al-Awa’s votes, Morsi could easily achieve the greater-than-fifty-percent needed to win the election. Shafik, however, would garner little sympathy other than from some of those who supported former foreign minister Amr Moussa. Fully aware of this fact, the Muslim Brotherhood has little incentive to capitulate to external political demands beyond gestures of goodwill.

In the aftermath of Mubarak’s verdict, however, public anger has reinvigorated a rejection of the transition process under military rule. Thousands took to the streets condemning the verdict against Mubarak as too lenient, and the acquittal of his sons and aides of corruption charges as unjust. They demanded a retrial, new leadership under a civilian presidential council, postponement of the presidential elections, and enforcement of the “political isolation” law that would exclude Ahmed Shafik from running for president. With a verdict that could potentially boost Shafik’s chances, Morsi met with former liberal candidates to explore the possibility of answering the protesters’ demands and forming a coalition interim presidential council. Mohamed El Baradei, founder of the new Constitution Party, expressed his willingness to join such a body provided all political forces agreed on its makeup. Shortly after the meeting, however, the Muslim Brotherhood announced its rejection of the idea, citing logistical difficulties. Mahmoud Hussein, the secretary-general of the Islamist group, said the only viable option available was to support Morsi in the runoff.

It seems the Muslim Brotherhood remains committed to its assessment that, in the absence of wide scale voter fraud, the political dynamic in Egypt all but guarantees a win for their FJP candidate. The philosophy appears to lean towards securing the presidency, leaving their relationship with the Supreme Council of the Armed Forces as is, and managing the remaining crises afterwards. Nevertheless, Morsi and his campaign have not yet explicitly rejected his participation in a potential partnership. As one of the elite members in the organization, Morsi will unlikely contravene direct orders from the party’s leadership to reject the idea of a presidential council. Leaving the door open to discussion with the other political forces, however, would at least lend the appearance of cooperation, align him more closely with the revolutionary forces, and elicit the support from former candidates needed to clinch the final vote. Given that the alternative – a Shafik win – would reignite massive political unrest akin to January 25th, what does the Brotherhood have to lose?

Tarek Radwan is associate director for research at the Rafik Hariri Center for the Middle East and a blogger for EgyptSource.
Photo Credit: Roger Anis