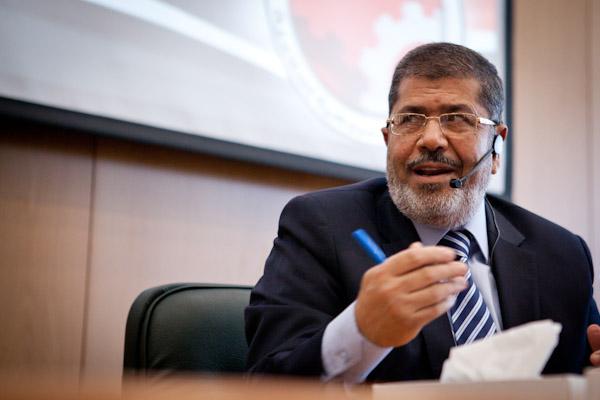 After a week’s worth of speculation, a three day delay, and a one hour speech, the Supreme Presidential Electoral Commission (SPEC) has named the Muslim Brotherhood’s Mohamed Morsy, the winner of Egypt’s first free and fair elections and the country’s first civilian president.

Farouk Sultan, the Chairman of the Supreme Consitutional Court of Egypt and SPEC head, delivered the announcement, preceded by a long speech, in which he defended all of SPEC’s prior decisions, including the disqualification of presidential candidates, and reinforced SPEC’s status as a legislative body rather than an administrative one.

After detailing violations and appeals, Sultan announced that with a 51.85% voter turnout, Morsy won with 51.73% of the votes, beating opponent Ahmed Shafik’s 48.27% of the votes.  843,252 of the votes were invalidated.

With almost 51 million registered voters, 37,952 were eliminated from the list over suspicisions regarding their eligibility to vote. SPEC received 456 appeals from both candidates, but focused on two specific issues.

Both claims – one alleging that over 1 million pre-marked ballots were found, in favour of one candidate, and the other claiming that Christians were prevented from reaching one specific polling station in the Upper Egyptian governorate of Minya, were dismissed. Sultan stated that SPEC identified only 2,154 pre-marked ballots, adding that it was unclear who was behind either of the incidents. Several polling stations were found to have more ballots than voters, and as a result, all votes from these polling stations were invalidated.

An hour before the announcement was made the Muslim Brotherhood once again publicly reinforced their insistence that Mohammed Morsi is the official winner, saying, "Minutes away from officially declaring Morsi the first civilian president in Egypt’s history, and first after the revolution."

Protesters gathered in Tahrir Square errupted in celebration, amid chants against SCAF. The Muslim Brotherhood has already announced its intention to remain in Tahrir Square until the people’s demands are met, in reference to SCAF’s constitutional amendments, limiting the president’s authorities and calling into question SCAF’s true intentions of handing over power on June 30, 2012, as promised.