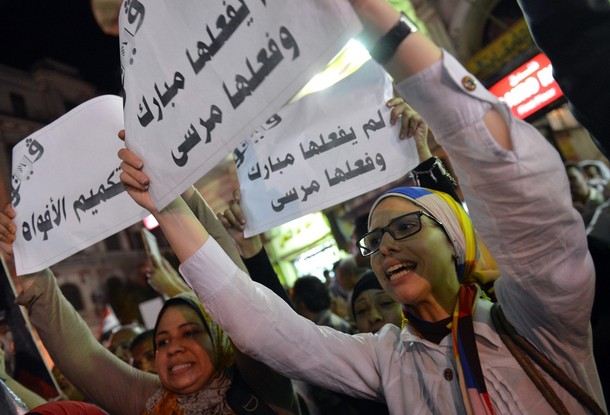 On Thursday morning, Afifi was detained after his case was postponed until September, a decision criticized by the Egyptian Organziation for Human Rights, Reporters without Borders, and others. Afifi is accused of spreading false news, insulting the president, damaging national interest and spreading panic – all criminalized under Mubarak’s notorious 1996 Press Law. Morsi’s decree has amended only part of the 1996 Press Law, in regards to pretrial detention, which allows for Afifi’s immediate release. It does, however, remain illegal to insult the president.

Following a meeting with Minister of Justice Ahmed Mekki and Vice President Mahmoud Mekki, Morsi amended Article 41 of the law, removing the clause which allows for the pretrial detention of journalists facing charges of insulting the president.

Morsi’s spokesman, Yasser Ali, told the MENA News Agency, “This is the first time Mr. Morsi, who was inaugurated as president on June 30 and stripped the military of legislative powers in August, issues a decree with the force of law.”

In the past few weeks, Muslim Brotherhood lawyers have taken full advantage of the restrictive legislation commonly used during Mubarak’s reign. Afifi’s trial is one of several cases in which Egyptian journalists are facing trial on charges of insulting the president. Tawfik Okasha, a harsh Muslim Brotherhood and January 25 Revolution critic, is facing similar charges, while his TV channel, al-Faraa’en has been taken off the air for 45 days.

A continuous media crackdown over the past few weeks has led to widespread concern over increasing restrictions on media freedom in Egypt. Issues of  al-Dustour were pulled from newsstands, while issues of al-Shaab, a newspaper associated with an Islamist-leaning party, never made it out of the state-owned print house, al-Ahram, allegedly over an article levying criticisms at Egypt’s intelligence service.

While Morsi has been accused of using Mubarak-era laws to silence Muslim Brotherhood critics, accusations have also extended to the Brotherhood-dominated Shura Council, believed to have appointed Brotherhood sympathizers and supporters as state newspaper editors-in-chief in order to ensure a state media favorable to the presidency.

On the one hand, with this decree, Morsi may be taking a light-handed approach, making minor changes in an attempt to appease the public in the wake of a severe backlash, without making any significant legislative changes, which could simply earn him further criticism. The move has already earned him additional comparisons to Mubarak who often pardoned journalists charged with insulting the president, with some suggesting a moratorium on questionable laws as a more suitable alternative. On the other hand, Morsi may simply be testing the waters with his first decree, one which will curry favor with the public, in preparation for opening the door to further legislative changes.