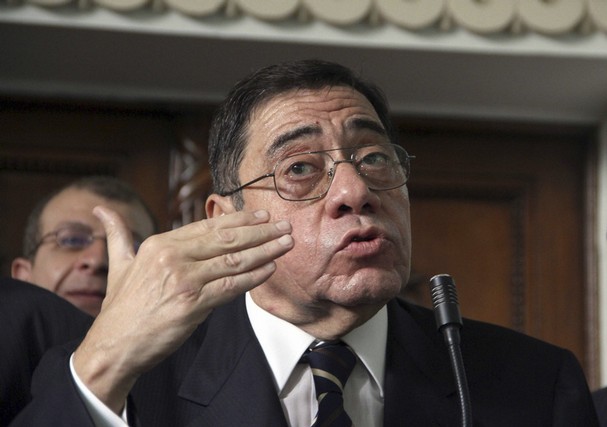 The three-day standoff between General Prosecutor Abdel Meguid Mahmoud and President Mohamed Morsi can be viewed as another attempt by the latter to flex his muscles and appease revolutionary forces. However, thanks in part to a media uproar, Morsi’s gamble backfired.

Nasser Amin, head of the Arab Center for the Independence of the Judiciary, places the blame on the president’s advisor and aides. He explains that Morsi was advised to dismiss Mahmoud, assuming that anger towards the camel battle verdicts would blind the public towards any infringement of the judiciary’s independence.

Thursday’s decision to appoint Mahmoud ambassador to the Vatican was clearly aimed at defusing public anger following the acquittal of the defendants in the infamous Camel Battle case. But Morsi was let down by the public support he had banked on.

After headlines suggesting that Morsi had sacked Mahmoud were met with anger and accusations that Morsi had breached the judiciary’s independence, he was forced to backtrack.

On Saturday, media reported that the president repealed a decision to appoint Mahmoud ambassador to the Vatican following a meeting with the Supreme Judicial Council, playing it off as a “misunderstanding.”

A disgruntled Mahmoud gave strongly-worded statements to the media saying he will hold on to his position to protect judiciary independence and to prevent the interference of the executive authority. He alleged that he received threats and was pressured by Justice Minister Ahmed Mekky and Chairman of the Constituent Assembly Hossam El-Gheriany to resign.

He addressed Morsi in a press conference Saturday morning, attended by over 3,000 judges in support, saying he will not leave his position unless he is assassinated.

Following cries of foul, reports on Saturday confirmed that Mahmoud is here to stay. In a press conference later that afternoon, Vice President Mahmoud Mekky denied any attempts by Morsi to violate judiciary independence. He criticized the media for suggesting that Mahmoud was “sacked,” adding that he was indeed offered the ambassador position but the latter was “vague” in his response, leading to the confusion.

In statements to MENA, the justice minister also asserted that Mahmoud has not been sacked by the president and that the decision to appoint him ambassador does not necessarily require him to step down.

Legal experts agree that Morsi has no authority to sack the prosecutor general, a power only the Supreme Judicial Council holds. Whether Morsi was aware of that is yet to be determined.

Other experts like Raafat Fouda, a constitutional law professor at Cairo University, suggest that Morsi was led to believe that he had the authority to sack Mahmoud by the justice minister, the vice president and the head of the National Council for Human rights, motivated by personal vendettas.

On the other hand, Gamal Eid, prominent human rights lawyer and executive director of the Arabic Network for Human Rights Information, remains disappointed by the decision to keep Mahmoud in his position.

According to Eid, Morsi cannot legally sack Mahmoud so he offered him the ambassador position and asked him to step down since it is a “public demand.” However, Mahmoud refused.

Eid maintains that the media blew the situation out of proportion and that Morsi never officially expelled Mahmoud.

“The revolution will continue to lose as long as Mahmoud is still Egypt’s prosecutor general,” he added.

A similar shakeup was attempted, albeit successfully, by Morsi last August when he forced Hussein Tantawi, head of the armed forces, and the chief of staff, Sami Anan to retire and canceled the complementary constitutional declaration issued by the Supreme Council of the Armed Forces earlier in June.

Dalia Rabie is a journalist based in Cairo. She worked as the Features Editor for Daily News Egypt