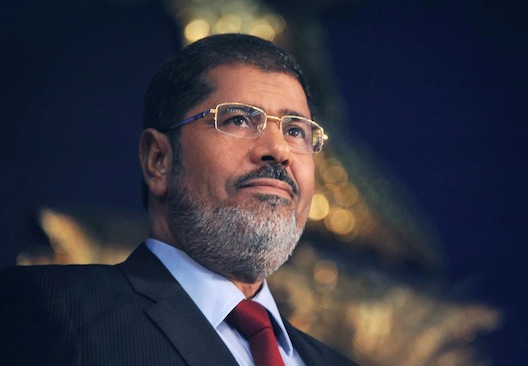 Egypt’s deposed president Mohamed Morsi has refused to recognize a court due to try him next week, declining to delegate lawyers to defend him over murder allegations. Judges presiding in an ongoing trial of Muslim Brotherhood spiritual leader Mohamed Badie and co-defendants on charges of incitement of murder have also recused themselves from the case.

Tamarod and Popular Current coordinate to form an electoral alliance
Tamarod campaign spokesman Hassan Shahin announced Monday that Tamarod will coordinate with the Popular Current in the upcoming parliamentary elections, in a statement issued by the campaign. Shahin added that this coordination is a part of Tamarod’s attempts to form an electoral alliance “with all the revolutionary powers of 25 January and 30 June.” Shahin said that Tamarod will soon meet with the Egyptian Social Democratic Party (ESDP) for the same purposes. [DNE, EGYNews, 10/29/2013]

Nour Party does not mind Sisi’s presidential candidacy
Nour Party media official Nader Bakkar said that the party is not against Defense Minister Abdel Fattah al-Sisi running the upcoming presidential elections, adding that toppled President Mohamed Morsi’s return was impossible. Bakkar said in an interview with the London-based Asharq al-Awsat newspaper, published Tuesday that the Nour Party has not specified a presidential candidate yet to back in the upcoming elections, adding the party does not mind Sisi’s nomination. Bakkar criticized the Muslim Brotherhood leaders saying they lost many chances for reconciliation, instead calling for protests that hindered any progress. [Egypt Independent, Ahram Online, 10/29/2013]

Sports Minister refers Kung Fu Federation and player to investigation for Raba’a sign
Minister of Sports Taher Abu Zeid has referred the Kung Fu Federation and player Mohamed Youssef to investigation. While receiving his gold medal at the World Championship in Russia, Youssef wore a yellow t-shirt bearing the pro-Morsi four-finger Raba’a sign. He was suspended by the Egyptian Kung Fu Association from participating in the next round of the international event. The player is now also facing charges of insulting Egypt at an international forum and promoting a banned group that practices violence and holds the Egyptian people as an enemy. [Cairo Post, 10/29/2013]

Morsi refuses to recognize Egypt court due to try him; Judges recuse themselves
Egypt’s deposed president Mohamed Morsi has refused to recognize a court due to try him next week, declining to delegate lawyers to defend him over murder allegations. Morsi is due to appear in court alongside fourteen others on November 4 on charges of inciting murder and torture during deadly clashes between his supporters and opponents outside the Presidential Palace in December 2012. Judges presiding in an ongoing trial of Muslim Brotherhood spiritual leader Mohamed Badie and co-defendants on charges of incitement of murder have also recused themselves from the case. The three judges from the South Cairo Criminal Court cited a conflict of interest as their reason for stepping down, and referred the case to another court, saying that the court felt “unease” over the case. Meanwhile, a judge in charge of the investigation of electoral fraud in the 2012 presidential elections has placed a gag order on the case, the state-owned newspaper Al-Ahram reported Monday. The case could deal a significant political victory for Morsi’s supporters. [Ahram Online, AP, Reuters, Aswat Masriya, Cairo Post, Mada Masr, 10/29/2013]

Military representative walks out of constitution meeting over right to information
In the latest chapter of ongoing disagreement within the committee of fifty tasked with rewriting the constitution, the Armed Forces representative pulled out from a closed meeting on Tuesday during a conversation over the freedom of information clause, several media reported. According to sources cited by the privately-owned Al-Watan newspaper, Magd Eddin Barakat pushed to add to the information clause a proviso specifying that it only referred to information that did not harm national security. The committee, however, was intent on leaving out this addition, particularly youth representatives, with representatives from the ultra-conservative Salafist Nour Party among the few voting alongside the military representative. Another debate erupted on Monday regarding Article 49, which establishes “freedom of scientific research.” The Nour party argued that freedom of scientific research should be granted, however research should be in accordance “to social standards,” a reference to the issue of cloning. Heart surgeon Magdi Yacoub asserted that freedom of scientific research should be unrestricted. Meanwhile, a majority of the committee voted to revise Article 47, which guarantees the free exercise of religion for all citizens, committee media spokesperson Mohamed Salmawy said on Monday. The revision would guarantee “absolute freedom of religious practice,” removing references to only the three monotheistic faiths. Salmawy also announced the approval of four more articles related to various freedoms, such as freedom of thought, artistic and literary freedom, freedom in scientific research and information dissemination. A new chapter was also adopted under the title of “Cultural Principles.” [Mada Masr, Ahram Online, Cairo Post, 10/29/2013]

Barakat refers charges against Bassem Youssef to prosecutors
Prosecutor General Hisham Barakat has referred charges against Bassem Youssef, presenter of CBC’s hugely popular show al-Bernameg, to the Cairo Appeal Prosecution for investigation. Youssef is charged with insulting the president and Egypt’s defense minister, General Abdel Fattah al-Sisi. Groups opposing Youssef are calling for protests outside al-Bernameg’s downtown studio during the show’s production on Wednesday night. Media spokesperson for al-Bernameg Mohamed Fathy said that neither Youssef nor the shows production team have been notified about an investigation. [DNE, Egypt Independent, 10/28/2013]

Egypt approaches Saudi, Kuwait for more money
Egypt is currently holding talks with Riyadh and Kuwait City in hopes of securing a fresh package of financial aid, a high-level Finance Ministry official said Monday. Results of the talks with the two Gulf countries – known for their support of Egypt’s military-backed interim government – will be announced soon, the official told Anadolu Agency on condition of anonymity. [World Bulletin, 10/29/2013]

Mansour: Security top priority for bringing Egypt’s economy back to track
President Adly Mansour met on Monday with General Abdel Fattah al-Sisi and Interior Minister Major General Mohamed Ibrahim. The meeting reviewed security conditions in Egypt and efforts to combat terrorist and the progress of security crackdowns in Sinai. A presidential statement issued following the meeting said the president asserted that maintaining security represents a top priority at this critical stage. The president called for reviewing measures of securing vital facilities and of activating security presence on the Egyptian street, confronting all outlaws and hard criminals in achievement of security and stability in order to prepare for bringing economy back to normal rates. [SIS, 10/29/2013]

Three injured in clashes between university students and security forces
Egyptian security forces fired teargas Monday to disperse students protesting in support of ousted Islamist president Mohamed Morsi, security officials said. Students demonstrated outside the campus of Al-Azhar University in Cairo, blocking a main road and chanting against the military for the ousting of former president Morsi in July amid massive protests against his rule. The Ministry of Interior issued a statement Monday afternoon stating that around 2,500 Al-Azhar University students had gathered outside the campus and blocked al-Nasr highway in both directions. The statement also claimed that students provoked the violence, and police forces only fired tear gas in retaliation. According to the interior ministry, two students were arrested. Student union representative Abdallah Abdel Moteleb, however, told Mada Masr that tear gas, pellets and live ammunition were being fired at protesting students both inside and outside the campus. Meanwhile, Endowments Minister Mohamed Mokhtar Gomaa and Al-Azhar Undersecretary Abbas Shuman said there is no intention to suspend study at Azhar University, despite the demonstrations. [Ahram Online, Mada Masr, DNE,  Reuters, Aswat Masriya, Cairo Post, 10/29/2013]

Egypt security investigates student for forming ‘atheist’ Facebook group
National security officials in the Suez Canal city of Ismailia are conducting investigations into a university student who allegedly set-up a Facebook group calling for atheism.  Police arrested the 20-year-old student of the Faculty of Commerce, Suez Canal University, following a report submitted by the university’s administration saying he had formed a group for atheists on the social networking site. The accused student appeared before the prosecution, who transferred him to national security for further investigation. [Ahram Online, 10/28/2013]

Ministry of Interior denies arrests of assailants in Ibrahim motorcade attack, Warraq church shooting
Ministry of Interior (MOI) spokesman Hany Abdel Latif on Monday denied media reports that security forces had arrested twenty-five suspects in connection with the assassination attempt on Minister of Interior Mohamed Ibrahim and the Warraq church shooting. State-owned Al-Ahram cited Al-Hayat TV channel as saying Sunday that twenty-five “jihadists” were arrested by Security forces, and that a press conference will be held soon to announce the arrests. Abdel Latif denied these reports, saying no press conferences are being organized. [DNE, 10/28/2013]

Kerry, State Department hint at Egypt trip
US Secretary of State John Kerry and the State Department on Monday dropped hints that a trip to Egypt could be in the cards in coming weeks. The visit, if it takes place, would be a first to Egypt by Kerry since the country’s president Mohamed Morsi was ousted by the military on July 3 amid massive protests against his year-long rule, straining bilateral ties. “I think we may be going to Cairo sometime in the next weeks. And one of the meetings that I insisted on having was that we make sure we meet with a cross-section of civil society,” Kerry said on the record at a closed press event in front of staff. State Department spokeswoman Jennifer Psaki was less direct, alluding to a possible stop in Egypt on an upcoming swing through the region. [AFP, Reuters, 10/29/2013]