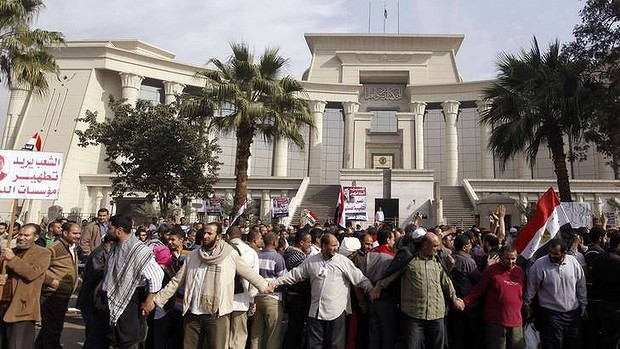 The Supreme Council of the Judiciary (SCJ), the State Council and the State Litigation Authority have all announced that judges will be overseeing the 15 December constitutional referendum. Conversely the national Judges’ Clubsaid that the country’s judges would not monitor the referendum unless President Mohamed Morsi rescinds his November 22 constitutional decree.

Both decisions are nonbinding for individual judges and it remains to be seen how the majority will proceed, and whether or not there will be enough judges for every ballot box.

When the Judges’ Club first recommended a full judicial strike against Morsi’s decree, most courts obliged. Morsi met with the SCJ in an effort to smooth things over, and while the presidency released statements to the effect that a consensus was reached, the council denied these reports.

The Cassation Court, the country’s top court, chaired by Mohamed Motaz Motwaly, who also happens to be the SCJ chairman, announced it would join the strike two days later. An overwhelming majority of 270 judges voted to join the strike, with only 19 voting against the decision.

With the Cassation Court; Egypt’s eight appeals courts in Cairo, Alexandria, Tanta, Mansoura, Ismailia, Beni Suef, Assiut and Qena; the 26 primary courts; and 90 percent of prosecution offices and courts of limited jurisdiction on strike the country’s entire ordinary judiciary has come to a standstill.

The State Council, responsible for handling administrative cases, announced all of its courts would also stop working, with the exception of the Administrative Judiciary Court’s first district, since it is currently handling cases filed against the November 22 decree, which continue to be postponed.

Meanwhile, thousands of Muslim Brotherhood and Morsi supporters surrounded the Supreme Constitutional Court building late Saturday night and early Sunday morning, blocking its entrances. The constitutional court was scheduled to rule on cases against the Constituent Assembly and Shura Council. In response to what they perceived as intimidation of the judiciary, its judges announced they would suspend work until further notice.

The presidency’s response to the surrounding of the court was tepid, with presidential spokesperson Yasser Ali almost defending the protestors. He said surrounding courts was something the presidency “did not like” but that judges were not prevented from entering the building.

Despite the ongoing conflict between the president and the judiciary, over 50 percent of Egypt’s judges have already asked to be involved in the referendum, according to the assistant justice minister. Why is it that the judiciary appears to be stepping back from its threat to boycott the referendum?

The problem that the opposition fails to understand is that the judges are not opposed to the referendum out of an ideological rejection of a constitutional draft they feel limits freedoms or that was completed without consensus.

Rather, the judges only threatened to boycott overseeing the referendum out of self-interest. Even the Judges’ Club, which continues to express its support of the boycott, linked it directly to the constitutional decree. If Morsi revokes the decree, they would oversee the referendum without any issues.

Furthermore, the decision to go on strike was made in a meeting of the judges’ general assembly held at the club. In contrast, the decision to boycott was taken unilaterally by the national club’s executive board and the presidents of the regional judicial clubs; there was never any true consensus to it from the start.

Judges have more to lose than gain by boycotting. For one, overseeing referendums and elections is one of the more financially lucrative judicial tasks with judges earning about EGP5,000 (approximately $800) a day for it.

Some feel that it is better they oversee the referendum and ensure its fairness, rather than leave the task to executive officials, opening up the possibility for fraud. Others feel that the constitution will pass either way and simply want to be on the right side of history, from the president’s perspective.

As for Morsi, he may yet rescind the decree in order to appease the judges. It would not be surprising if the decree was part of a plan to guarantee the passing of the draft constitution. If Morsi does repeal the decree, he will do so at the last minute possible.

The decree has three main goals: appoint a new prosecutor and protect the Constituent Assembly and Shura Council from dissolution.

With the referendum already scheduled, the Constituent Assembly no longer needs protection. Similarly, Morsi has already appointed a new prosecutor and Article 236 of the constitution states that, while constitutional decrees are cancelled with the adoption of the constitution, their effects at the time of issuing are to last.

The only reason the decree still exists is to protect the Shura Council. The upper house of parliament has an Islamist supermajority of 83 percent with the Muslim Brotherhood’s Freedom and Justice Party alone commanding a 58 percent majority of seats.

Morsi and the Brotherhood know they will not be able to replicate their electoral victory in the 2011 parliamentary elections. So instead, the draft constitution gives the ineffective Shura Council, elected by less than seven percent of the country’s eligible voters, full legislative authority. The proposed constitution also specifies that the current council will remain intact until a lower house of parliament (House of Representatives) is elected. At that point, legislative authority will be transferred, and a new Shura Council will be elected within six months of the House of Representative’s first session. Morsi is essentially guaranteeing the Brotherhood maintains the legislative majority for the immediate time period  after which the constitution passes.

As such, if he were to cancel his decree, Morsi would only do so at a time when it is too late for the courts to dissolve the Shura Council, guaranteeing its survival into the post-referendum era, when it will be protected.

Sunday’s protest in front of the Supreme Constitutional Court, which forced it to suspend work, may have been the first step towards that goal.

Ahmed Aboul Enein is an Egyptian journalist and news reporter for Daily News Egypt. He graduated with a Bachelor of Arts in English and Comparative Literature and Journalism from the American University in Cairo.