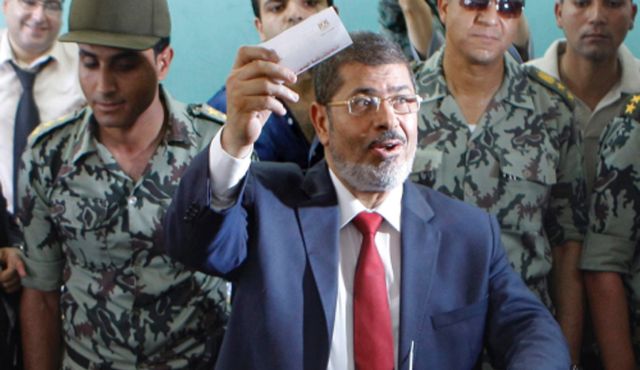 The extremely confusing political picture in Egypt clarified a bit in the last 48 hours, as indications surfaced that there is an intense negotiation going on—whether directly or indirectly—between the SCAF and the Brotherhood over whether Mohammed Morsy will be able to claim his electoral victory.  The question seems to be whether Morsy will accept the humiliating conditions the SCAF imposed:  Islamist majority parliament dissolved, presidency stripped of many powers, constitution to be written under pressure of military rule.  If not, the SCAF is sending signals that it is prepared to declare Shafik the winner.  The Presidential Election Commission is reported to be recounting votes during this three-day delay in announcing results, and the SCAF has massed military forces outside of cities (subtle, yes), showing that it is ready to deal with the expected public anger if Shafik is named president.

Morsy, for his part, has countered with a show of political strength, including large but not overwhelming protests in Tahrir.  He also courted liberal and other groups heavily in recent days, announcing on June 22 his agreement to appoint a non-Islamist prime minister and a cabinet with a non-Islamist majority.  In exchange he obtained the support of a number of liberal, leftist, and youth leaders including Wael Ghonim, Islam Lotfy, Ahmad Maher, Wael Qandeel, and others from the campaigns of Abdel Moneim Aboul Fotouh and Hamdeen Sabbahi.

Will Morsy take the SCAF deal, and take up residence in the presidential palace?  If not, will the Brotherhood resort to confrontation with the SCAF, which for Morsy could mean that he instead spends years in Tora Prison?  It is a stark choice, and a risky one for Morsy either way.  While Abdeen might seem the obvious choice, Morsy and the Brotherhood risk being compromised and eventually displaced by others if they agree to play the game according to the ever-changing rules of what I have started to call the SCAF’s “Etch-a-Sketch” transition plan.

Either way, it is depressing to consider that Egypt’s first free elections, those for the parliament in November-December 2011, have now been tossed into the dustbin.  And its second free election, those for the presidency, now seem just as endangered.  Sad that the presidency might end up being decided in a SCAF-Brotherhood negotiation instead of an honest reflection of the will of the voters—who, by the way, had no idea when this process started on May 23 that they were voting for a president with such limited powers.  Frightening to think what all of this does to the confidence of Egyptian citizens in their infant political processes.

And things are likely to get worse before they get better.  If the election commission announces for Shafik on Sunday or whenever, Egypt will become a hard hat zone.

Michele Dunne is the director of the Atlantic Council’s Rafik Hariri Center for the Middle East. Photo Credit: AP