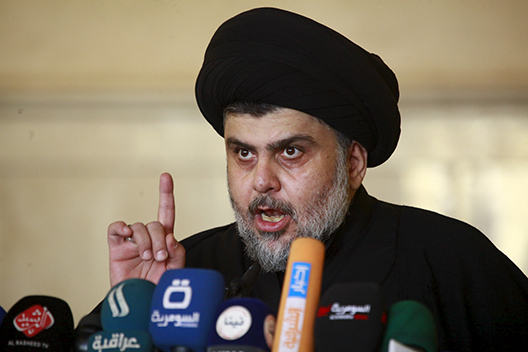 Muqtada al-Sadr delivers a sermon to worshippers during Friday prayers at the Kufa mosque near Najaf, December 11, 2015. (Reuters/Alaa Al-Marjani)

In a speech a day after his followers stormed Iraq’s parliament, Shia cleric Muqtada al-Sadr described the move as a gesture of civil disobedience in rejection of Iraq’s political class and the sectarian division of power and corruption within it. The protesters tore up papers, ransacked offices, and kicked furniture around, with some reports of attacks on individuals. As they made their way through the parliament, some of Sadr’s supporters, however, chanted ‘Silmeyeh, Silmeyeh,’ or ‘Peaceful, peaceful.’ Sadr—who wears a black turban denoting he is a descendant of the Prophet Mohamed—ordered his followers to evacuate the parliament a few hours after they had breached the building. They camped out not too far from parliament for the rest of the night, and upon receiving fresh instructions the next day, dispersed from the Green Zone almost as suddenly as they had gathered. At no point did Iraqi security forces attempt to stop them, mostly out of respect many in the Shia community have for the black-turbaned Sadr, and for fear of causing bloodshed and provoking more violence.

Sadr announced in his May 2 speech that he was going into seclusion for almost two months, giving the government and Iraqi politicians a chance to introduce the right reforms, which in his view include a completely technocratic government and decoupling of executive positions from the sectarian quota system that has prevailed thus far. That sectarian division of power—a quota system guaranteeing major sects and ethnic groups a place in the system and a role in the decision-making process—was introduced in 2003 in the aftermath of the foreign invasion and the upending of a dictatorship that had kept the state together by force. Sadr also called for a series of escalating measures including the dismissal of Iraq’s president, prime minister, and speaker of parliament, early elections, or a general strike.

Who is Muqtada al-Sadr

Sadr hails from a revered Shia family in Iraq and is the son of Grand Ayatollah Mohammad Mohammad Sadeq al-Sadr, a well-known Shia cleric who was assassinated by Saddam Hussein in the nineties. Muqtada al-Sadr first came to prominence in 2003 as a young populist leader who railed against the US occupation of Iraq and whose militia, Jaish al-Mahdi, was implicated in attacks against US soldiers. From the start, however, he wavered between attacking the occupation and the Iraqi leaders who collaborated with it and attempting to ride the wave of change and find a place for himself among Iraq’s new ruling elite. In private conversations in 2003, two of his top aides asked me, in my capacity as State Department Spokesperson for US Central Command in Baghdad, if the United States would support a role for him in the Iraqi Governing Council, Iraq’s provisional government established by the transitional Coalition Provisional Authority (CPA). CPA leadership, acting on suggestions from some members of the Iraqi Governing Council, was more interested in having Sadr arrested than in coopting him. Senior Iraqi leaders advised at the time that Sadr was best contained and left alone on the grounds that he was unpredictable and dangerous to work with, but even more dangerous if made a martyr.

Sadr’s flirtation with violence, and Jaish al-Mahdi’s brutal tactics, led the militia to a violent sectarian confrontation with the Iraqi army, under then-Prime Minister Nouri al-Maliki in 2008. Sadr, who was in Iran as Jaish al-Mahdi suffered the defeat, spent three years in self-imposed exile, returning to Iraq in January 2011 when he publicly called on his followers to abandon the use of violence. Sadr’s return brought with it political influence, an understanding with Maliki, and a dominant bloc in parliament. By 2014, he had again withdrawn from the limelight, in what was reported as an attempt to protect the family name. Today, Jaish al-Mahdi, reformed in 2014 as Saraya al-Salam (Peace Company), fights alongside the United States against the Islamic State (ISIS).

Emerging once again in February of this year, Sadr remains a populist and unpredictable leader, but has tapped into issues that are at the core of what’s wrong with the Iraqi state and its longstanding problems. By championing the poor and adopting peaceful civil disobedience, Sadr appears to have stumbled upon a way to harness a genuine anger in the Iraqi population against a corrupt and inefficient state that has repeatedly failed to correct course and come together to face Iraq’s challenges.

Before the storming of parliament, Prime Minister Haider al-Abadi, who came to office with a reform agenda himself, attempted to respond positively to Sadr’s earlier demands to form a cabinet that does not represent political parties. On March 31, in a speech in which he thanked Sadr for his role in pushing for a new cabinet, Abadi presented parliament with a list of technocrats—politically unaligned ministers who he said were chosen for their expertise rather than their political or sectarian affiliation. Sadr accepted that cabinet even though it included only two names out of 90 he had suggested, indicating he is not necessarily interested in personal power, but rather a role in helping form a reform cabinet. Parliament’s rejection of that cabinet, however, prompted the popular upheaval. One protester said in a video shared by the New York Times, “Our legitimate and only demand is to dismiss the government and replace it with an independent cabinet of technocrats. We say no to them and their quotas.”

Other grievances were reflected in the slogans used by Sadr’s supporters on May 1. In addition to calling for a technocratic cabinet, they also called for anti-corruption reforms. Transparency International (TI) ranks Iraq 170 out of 175 countries surveyed for corruption in 2014. A 2015 TI report said, “Corruption in the military and security services and oil smuggling has contributed to the major security challenge that the country now faces with the militant group ISIS.”  The report adds that the fall of Mosul in 2014 was facilitated by nepotism, with claims that then Prime Minister Maliki appointed generals close to him, and that the numbers of soldiers in Iraq’s Armed Forces were deliberately inflated by senior officers and government officials. They then pocketed the money allocated for these “shadow soldiers” who were supposedly guarding Iraqi borders and cities against outside attack. Iraqis also often complain that 13 years after the fall of Saddam, power outages are a part of daily life, except for facilities and homes owned by those in positions of power. A rejection of these practices was evidenced by the chant used by the mob occupying parliament on May 1: ‘Haramiyeh, Haramiyeh’ (thieves, thieves).

Just prior to sending his followers into the Green Zone, Sadr reportedly traveled to Beirut to consult with Hassan Nasrallah, Hezbollah’s Secretary General—who is respected by Iraqi Shia leaders. Sadr has not been shy in expressing his admiration of Nasrallah, describing himself once as “the striking hand of Hezbollah in Iraq.” Sadr’s recent speech was also replete with Qur’anic references, likely thrown in to reflect his improved religious scholarship gained from recent studies in Iran, and a Nasrallah-style delivery, down to hand gestures and an emphasis on the interests of those he represents rather than on any personal ambition of his own.

Nasrallah’s influence could be positive or negative, depending on how Sadr chooses to use it. The former’s pragmatism could induce the latter to be satisfied exercising influence from behind the scenes without seeking to assume power directly. He has said in his recent speech, as well as on previous occasions, that he seeks only to influence government rather than replace it. While all signs thus far indicate a commitment to a nonviolent movement, it remains to be seen whether the relatively young and passionate Muqtada al-Sadr has accumulated enough political wisdom in recent years to exert his influence on Baghdad’s power elite peacefully or, if in a rush to cash in on his popularity, he might precipitate a violent confrontation in an already tense and complex Iraqi environment.