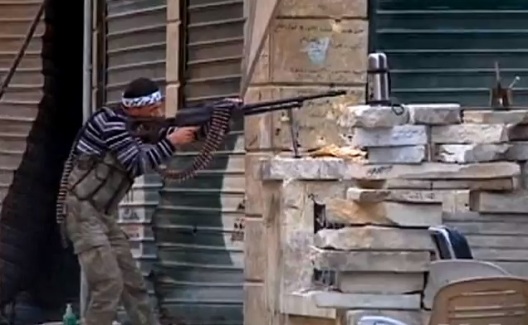 A recent exchange between Senator John McCain and Fox News’ Brian Kilmeade reflected a disturbingly popular view of the Syrian uprising: that it is a jihadist phenomenon, dominated by groups just as or even more hostile to the US than the regime. It follows that the US has no interest in backing the rebellion and may actually be better off supporting the regime, which has supposedly protected minorities and fostered pluralism.

This narrative is not only false (though it contains an element of truth); it is dangerous, because it allows its proponents to shut down meaningful debate about US policy in Syria. Who, after all, can argue for a policy that champions takfiri jihadists, whose ideology allows or even calls for the killing of innocent ‘unbelievers’? At a sensitive time during which (one hopes) the United States is shaping a strategy in Syria, however, it is critical for Congress and the media to get the facts straight, and to reflect this in their engagement with the public.

The McCain-Kilmeade conversation centered on a video clip run by Fox News, depicting what appears to be a rebel shooting down a Syrian regime aircraft. After scoring a hit, he can be heard shouting ‘Allahu Akbar’ (‘God is great’). Pressing McCain on the danger of helping Islamist rebels, Kilmeade said he was hesitant to back fighters “screaming [Allahu Akbar] after a hit.” Presumably, Kilmeade believes ‘Allahu Akbar’ is a jihadist slogan of sorts. Perhaps some of the audience share in his error.

The Syrian uprising began in rural areas of Hawran, Idlib, and the countryside around cities such as Damascus and Homs, before spreading to their suburbs. Most of these miserably poor areas are populated by conservative, devout Muslims. Naturally, the rebels themselves are overwhelmingly (though by no means exclusively) Muslim. Like Muslims everywhere, their conduct and habits are informed to a degree by their faith. That does not, however, make their fight against the regime a religious one. Syrians revolted not because they are Muslims, but because they saw no other way of challenging fifty years of poverty, humiliation, and disenfranchisement by a regime that had long abandoned and then brutalized the most destitute parts of the country.

‘Allahu Akbar’ is a profession of faith used by all Muslims; it is also an expression of gratitude, awe, celebration or any of a number of strong feelings. In combat, it may be any or all of these things, in addition to a battle cry. It is what a Muslim fighter would shout when overwhelmed with emotion after shooting down an aircraft that had burned, crushed, and buried friends and family alive for more than two years. In the terror, desperation and excitement of combat, people are naturally animated by their deepest held beliefs. To his credit, Senator McCain replied by asking Kilmeade whether he would feel equal unease if a Christian soldier shouted ‘Thank God’ after scoring a hit against an enemy. Presumably not.

It is unfair and absurd to expect Muslims to abandon their social, moral and spiritual foundations and habits if they want our support—material or otherwise—in a just cause. That most Syrians are not secularists does not make them any less deserving of help in the face of violence and tyranny. It certainly does not negate the United States’ strategic interest in punishing, deterring, and ultimately helping replace the Syrian regime.

This is not to say there are no takfiri extremists in rebel ranks. Clearly there are, and their recent military successes have rightly alarmed the United States. Still, they are a minority of the insurgents, and the greatest threat they pose is to those whom they consider the real traitors to their cause: Muslims who do not share their totalitarian ideology. Their achievements stem not from the popularity of their ideas, but from consistent foreign military and financial support of the kind the United States has failed to provide to moderate rebels. It is hardly fair for the United States to punish moderates because of the jihadist empowerment it has unwittingly facilitated.

Out of ignorance, laziness, deliberate manipulation, or all of the above, persons of influence in the media and government continue to bludgeon the public with distortions of the Syrian uprising. Congressmen refer to rebels as ‘Islamic extremists’—conflating the cultural-religious term ‘Islamic’ with the political-ideological ‘Islamist’. A recent rebel attack on regime-held Maaloula makes headlines as an attack on a Christian village—as if being Christian ought to have exempted Maaloula from the ravages of a country-wide civil war, or that it was targeted because it is Christian and not because it was controlled by the regime. It can be exhausting to resist this relentless barrage of misinformation, yet reason and conscience demand we approach the Syria problem with honesty and integrity, whatever our policy position.

One can only imagine how decent Syrian Muslims must feel when they hear the leaders and intelligentsia of a country that professes support for their cause writing them off as fanatics, deserving to be left to the tender mercies of the Assad regime. The argument that the Syrian civil war is simply a conflict between the regime and jihadists is tempting to make, if one is merely looking to sabotage meaningful discussion of a difficult policy issue. It is also a dishonest one, unfair to the people of Syria and their US supporters and disastrous if allowed to stifle the debate on Syria.