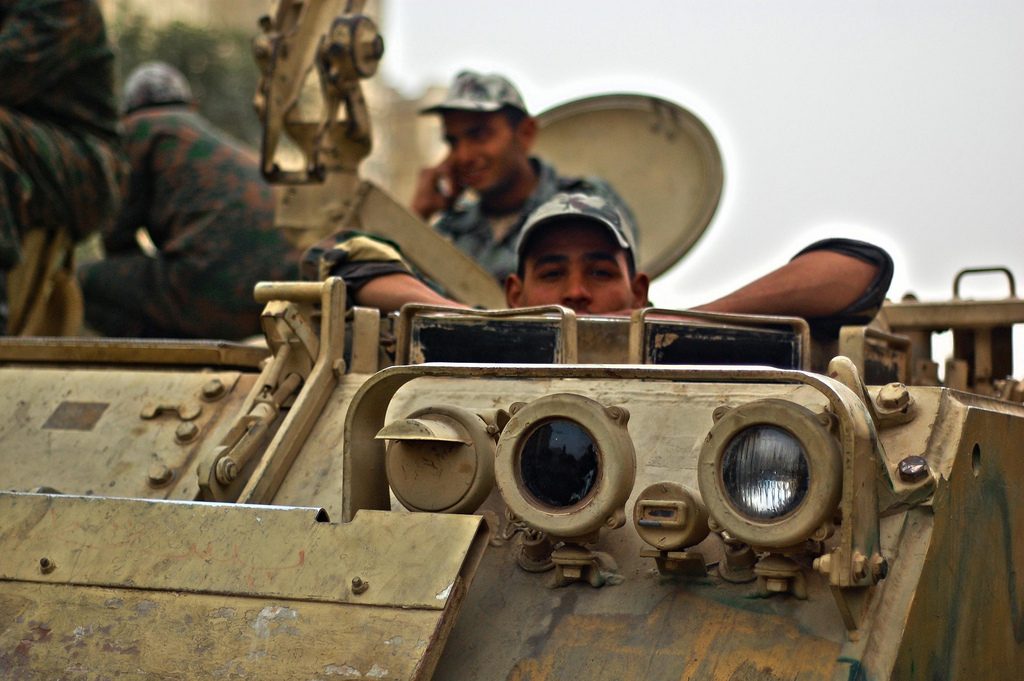 Calls are growing, both on the streets and in the media, for the Egyptian army to return to the political arena, with some seeing the military as Egypt’s last refuge against chaos and collapse. Rather than demand for the return of military rule, I call on all secular parties to look for “democratic” solutions to the current state of affairs. While these calls have not abated, and we have instead seen an increase in ‘popular movements’ calling for the consolidation of power in the hands of the army, there are many dangers that could come of this demand.

The Egyptian army is a national institution and a key pillar of the state, but its task today is to protect the country, without interfering in politics or the management of public affairs.  This task extends to the protection of vital state institutions (The Suez Canal), and to securing, in exceptional circumstances, the country’s internal line of defence, i.e. the governorates bordering the Canal.

Following the numerous mistakes made in the past two years, Egypt finds itself on the verge of a complete lack of governance and a collapse of the political process.  Democratic procedures like elections, as well as the governmental authorities that depend on these elections, such as the Executive (the Presidency), and the Legislature (the Shura Council), are all suffering from a perceived loss of legitimacy.  Violence is on the rise, along with partisan struggles and repeated human rights violations.  While the political elite, and the Muslim Brotherhood in particular, bear the responsibility for the series of administrative errors that have been made during the transition to democracy beginning in 2011, the Supreme Council of the Armed Forces (SCAF), representing the military, also made many mistakes. Their period of rule from February 2011 to July 2012 saw extensive violations of human rights.

There are still several paths to be taken to lead Egypt out of this crisis.  The country must distance itself from the threat of violence and collapse brought about by the failure of the political elite in its management of public affairs.  Fair legal and constitutional principles must govern its politics.  There must be a rotation of power, public participation via elections, and social justice must be achieved.  None of the political elite, either in the government or the opposition, will succeed in bringing Egypt out of this crisis if they do not come to rely on the principle of national partnership, and if they do not make a serious attempt to find common ground.  The task of the Egyptian army remains that of protecting the country, its security, and its national institutions without interfering in politics or the management of public affairs.

Elections, popular participation, and democratic measures being used to achieve a real national partnership that will manage the transitional period are the responsibility of both citizens and the political elite.  This would guarantee a rotation of power, protect rights and freedoms, achieve social justice, preserve the opportunities of coming generations, and immediately save Egypt from the threat of collapse, or of its falling prey to a single ideology.   Such a national partnership does not preclude the possibility of competition between members of the political elite, provided that it is peaceful.  Political office would be linked to the intelligence of politicians, whether that of the government or the opposition, and to their ability to make rational choices in providing for the benefit of the nation, as opposed to narrower personal interests.

Thus, it is national partnership that represents Egypt’s last refuge, not summoning the army to return to politics.  The direct or indirect promulgation of the slogan “the army is our last refuge,” will only limit the chances that of political elite achieving a national partnership, as it will strip away what remains of popular confidence in their leadership.  Offering the army as an alternative only reproduces its image as a strong, organized, national institution, while neglecting all the mistakes made by SCAF.

During this period of democratic transition, it is of key importance that the army, along with the security and intelligence forces, be made accountable to the elected, civil authorities, and to the independent judiciary.  Egypt, whose new constitution stipulates the power of the parliament to regulate the army, and to supervise its budget and economic activities, has yet to achieve the principle of full democratic supervision.  Here as well, spreading the message that “the army is our last resort” only further removes the army from the control of the country and its political system.  Those who call on the army as our last refuge should ask themselves: How will it then be held accountable to democratic supervision and the rule of law?

I call on all politicians, regardless of ideological beliefs, whatever your intentions may be, to cease your calls for the army to enter politics, as well as your claim that it represents our last refuge.  When you do this, you are not helping Egypt make its way past the current lack of governance, and the danger of a collapse of the political system.  You do not realize the terrifying prospect of national disintegration, and of a state of chaos in which neither the army nor any other institution will be able to save Egypt from destruction.