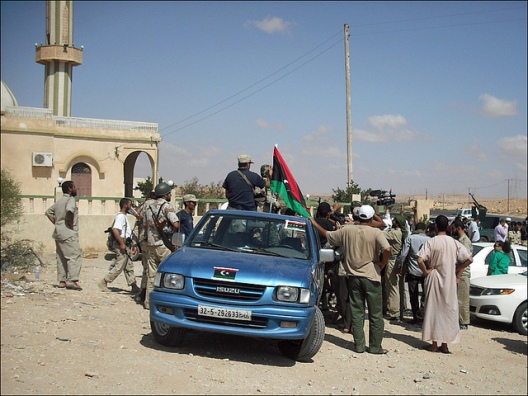 The month of February this year does not only mark the anniversary of the uprising, but it will also be a month of intense debate that will determine Libya’s political future: the drafting of the constitution. While Libya’s leaders will take some major political decisions this month, Libya’s security problems persist and present serious challenges to meaningful transformation. Some civil society groups aim to ensure the fair representation of women in politics, while others focus on regional representation, and others yet struggle to invigorate youth engagement, little-to-no effort has been garnered to safeguard the country’s path through a focus on national security initiatives. Watch dog groups, the media, and political analysts critical of the current process are too often met with violent resistance on the part of militia groups, some of which subscribe to certain political ideologies represented within the General National Congress (GNC).

As of late, the media has been the prime target of intimidation tactics geared to silence any efforts to inform the public on government dealings, instability in the country, and anything that could mobilize citizens to speak out. Before the scheduled protests against the extension of the GNC last Friday Feburary 7,  Benghazi-based media channel Libya Al Ahrar was set on fire. No one has yet claimed responsibility, but its staff reported that the arson attempted to discourage them from covering the protests set to take place.

The Libyan branch of the international NGO Reporters Without Borders (RWB), which focuses on freedom of the press, condemned the growing violence used against journalists in the country. They described several incidents which included kidnappings and abductions, assassination attempts, and even the firing of an rocket propelled grenade (RPG) at the apartment of a news editor in Tripoli. RWB stresses that “freedom of information is a fundamental right that must be respected if a real democracy and the rule of law are to be established in Libya.”

These groups have also violently intimidated security officials who set out to address the country’s instability and most are forced into silence. Colonel Fethallah al-Gaziri, the newly appointed head of Libya’s military intelligence in Benghazi who advocated for an invigorated approach to security, was assassinated in Derna while on a brief family visit. Members of Libya’s judiciary have also been targeted including former Attorney General Abdulaziz al-Hasadi of Derna, was assassinated outside his home last week. This string of assassinations has crippled the country’s only saving grace: citizens and civil servants who set out to hold the government and congress accountable, rally for transparency, and demand an end to militia governance.

The political process in the country exacerbated the ever widening gap between the civilian population, its youth, civil society, and the political elite. The GNC does not recognize protests organized by civil society groups. In fact, a law passed on February 11 made it illegal to ;criticize the government, its branches, or the February 17 revolution. The policy not only dismisses civil efforts to engage in politics, it also sheds the government of any responsibility to protect protesters’ rights to freedom of expression. It also cleverly equates the GNC with the revolution—a concerning development that only pushes people further from the GNC. Despite the outrage sparked by this law, many Libyans have also reacted with indifference as they believe in the context of a poor security environment that the government is too weak to enforce these measures.

Fear, uncertainty, and skepticism dominate the public conscience. Despite the continued violence, many remain hopeful that those in power are on a steep learning curve, that Libya has surely hit rock bottom and can only go up from here. Libyans who uphold the goals of the revolution will not back down from the dreams and aspirations they held for so long. This sentiment, however, cannot be taken for granted. The longer the political and socioeconomic demands remain unanswered, the greater the likelihood that people will lose faith in the process.

Politically, people want to see some light at the end of the tunnel. Libya as a state has been held hostage by the imminent constitution writing process rather than it being a phase of evolution. In Tunisia, various factions of society were able to come together to compromise and debate, ultimately producing a constitution rooted in recognizing equal rights and common values for all citizens. Libyan citizens want to see similar advancements, free from individual or partisan interests—armed or otherwise.

Socially and economically, Libyans face immense challenges in their everyday life. Electricity outages, interruption of the school curriculum by unforeseen school closures and ‘national holidays’, and a lack of basic services represent just some of the daily struggles people face in the oil-rich country. Because various regional, ethnic, and armed groups wish to strong-arm their own agendas, oil fields have been taken over, affecting oil production and revenues. Libya once exported over 1.5 million barrels of oil a day; now it only exports approximately 600,000 barrels per day. The effects of this disruption are acutely felt on the Libyan street.

Marred by political divisions and contesting agendas, Libya’s needs have been neglected for far too long. A nationwide call for demonstrations could potentially recalibrate the government’s calculations. Mass protests demanding accountability would not only challenge the GNC’s attempt at governing with impunity, but also demonstrate the people’s rejection of policies trying to silence them. It is not the citizenry against whom the government should be drawing ‘red lines’ but the armed rogue groups who threaten to hijack government policy, challenge the government’s monopoly on the use of force, and cast a cloak on the security situation at large, rendering all crimes—political or apolitical—to remain unsolved.

In order to salvage security in Libya, the government and GNC must address a few key issues which, given time, will shift the power balance in favor of rule of law and government authority. This stage will undoubtedly require the cooperation of local councils across the country, civil society, Libyan media, and international support. With proper training and equipment, local security forces would remain independent of militia influence while being accountable to the people. A concerted effort to reinforce security forces in local communities will contribute to the collective stability of the nation. Furthermore, an investigation into all assassinations and murders that have terrorized Libya over the past three years must take place in order to regain public support. These steps could prove to be game-changers for security in Libya, paving the way for a climate in which the rule of law is respected.

The month of February promises to challenge the government’s resolve, feed the public’s overflowing complaint jar, and set the precedence for the coming months. Unless the country’s trajectory is firmly redirected to one which covets clearly outlined measures to address the country’s dire security needs, we risk an escalation in violence and further political and social unrest.