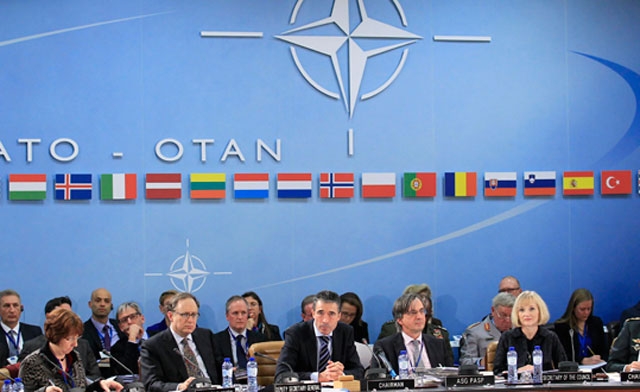 The heavily-qualified December 4 decision by NATO to dispatch Patriot missile batteries to Turkey’s border with Syria reflects a pattern of reluctance by the Alliance to involve itself in the messy conflicts of the Middle East. In announcing the decision, NATO Secretary General Anders Fogh Rasmussen emphasized all the things the Patriot battery would not do: not be a prelude to a no-fly zone, not be fired at aircraft but only at missiles, not be used over Syrian territory, and so on. Even the symbolic aspects of the NATO move seemed diminished by the rush to publicly downplay the military significance of the deployment, taken nearly a month after Turkey broached the idea. One wonders, then, what the Secretary General actually meant when he chimed in to support the Obama administration’s warning to the Syrian regime not to use its chemical weapons against its citizens. Rasmussen stated that he would expect "an immediate reaction from the international community." He did not say that NATO would take any concrete action.

NATO’s ambivalence towards involvement in Syria and other conflicts in the Middle East reflects the Alliance’s troubled experience figuring out how to play a useful role in the region, and its spotty record in developing partnerships with countries in the Middle East and North Africa. NATO’s assistance to the Libyan rebellion, seemingly a good example and perhaps a model of working together with Middle Eastern states to pursue a shared interest, turns out to be an aberration that was largely prompted by strenuous arm-twisting by the US allies in the Gulf, particularly Qatar and the United Arab Emirates.  The action did not spring from NATO planning or a broad shared interest among NATO members, and NATO quickly exited the scene as soon as possible after Qadhafi was killed, in some ways contributing to the security chaos that ensued.  Nor has NATO’s involvement in Afghanistan whetted the Alliance’s appetite for involvement in the region, where US allies are counting the days until they no longer have to explain to their populations why their forces are still involved, and at times unilaterally reducing their commitments.  NATO is studiously absent from the confrontation with Iran over its nuclear weapons ambitions, leaving this responsibility to a small number of members organized under US and UK leadership.

NATO’s Summit in Chicago last year placed a great deal of emphasis on partnerships, but did not give new life to the two instruments NATO employs in its ties to the Middle East and North Africa (MENA). The Mediterranean Dialogue, founded in 1994 to help foster what looked like a promising Middle East peace process at the time, has withered in the absence of the same. The Istanbul Cooperation Initiative, started in 2004 to engage Gulf states, has suffered from lack of participation by Saudi Arabia, the major military power in the Gulf, and failure to live up to the expectations of other participants. These initiatives are supported by a tiny, overworked staff at NATO headquarters in the public affairs department and so far have resulted in very little: some modest training efforts and familiarization with NATO’s operations through dialogues with some Middle Eastern ambassadors based in Brussels, and occasional gatherings in the region.

Despite the limited success of NATO’s official partnerships in the MENA region, bilateral military and intelligence relationships between major players in the Middle East and the US, UK , and France are thriving. The Gulf in particular, driven by fear of Iran’s ambitions, has become a huge market for advanced military systems from Western countries. Integration of these systems, with all the attendant needs for training and maintenance, consumes much of the energy of the military establishments in the Gulf and provides excellent access points for Western influence and insight into the workings of partner militaries in the Gulf. There is no specific NATO role in these transactions, whose basis is rooted in bilateral, not multilateral relationships. NATO training is welcomed by numerous regional states, including Saudi Arabia, and perhaps could be a credible and affordable basis for a continuing relationship.

Does NATO Have a Role?

Given NATO’s lack of ambition to involve itself in the key security questions in the region and continuing reduction of military spending by Alliance members, it makes sense to ask whether NATO should even attempt to play a formal role in the MENA region, or whether it should focus its efforts elsewhere. If Alliance members want to continue the dance with the Middle East, they will need to deal with some fundamental questions in order to restore credibility to the effort. These include a better definition of what Middle Eastern partners should expect from NATO. Would NATO join a coalition of Arab states to bring down Assad in Syria? Unlikely, given US unwillingness to put troops into Syria. Will NATO be there should Iran attack Kuwait or Saudi Arabia? Not likely. Or does the informal security umbrella provided by the US to Gulf states serve as an adequate substitute for a NATO role?  Should the NATO role be limited primarily to the provision of training opportunities for willing MENA militaries? While political dialogue is often cited as an important part of NATO partnerships, in the case of the Middle East, the political dialogue has lacked clarity and risks undercutting its own value. If there is to be a political element, NATO might be best served by a focus on nurturing ties to those states in the region with genuine military capabilities and the will to use them against common adversaries.  NATO, with US leadership, needs to clarify its mandate and ambitions for its Middle East partnerships, or risk a continuing loss of credibility in the region.

Richard LeBaron is a Visiting Senior Fellow at the Rafik Hariri Center for the Middle East of the Atlantic Council and served as US Ambassador to Kuwait from 2004 to 2007. Photo Credit:  Reuters