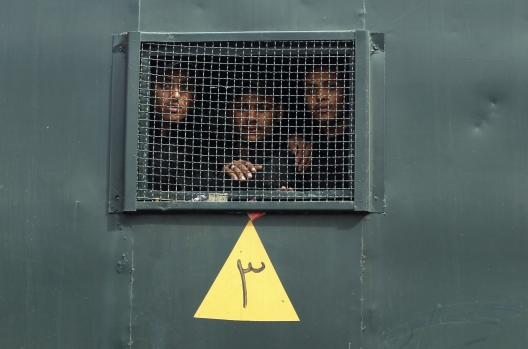 For the first time, this February, the National Council for Human Rights called on the Ministry of Interior to allow it to visit detention facilities in Egypt’s police stations. The demand comes amid continued complaints over the state of detention cells at police stations, deaths due to overcrowding, lack of ventilation, and stories of alleged torture and disappearance.

“We hope they [the Interior Ministry] agree to this request,” NCHR member George Ishak told EgyptSource. He added that the request made to the ministry called for visits to all police stations nationwide, with an average of two police stations each week. Ishak said that the Council has also requested visits to the main public prisons outside Cairo, including those in Upper Egypt’s Minya and Qena, the Nile Delta’s Banha, Tanta, and Mahalla, and the coastal city of Port Said. “We asked to visit two main prisons each month, with proper access to prisoners and their cells,” Ishak said.

The NCHR, however, faces multiple obstacles. Surprise visits are not possible for NCHR members, as only the Prosecutor General can order a surprise visit to detention facilities. The NCHR is obliged to make a request to the Ministry of Interior to visit prisons and detention facilities, and all details are pre-arranged. Prison officials and police officers are also not obliged to fulfill these requests, including requests to visit specific prisoners or to inspect cells where inmates are held. On a recent visit to Aqrab Prison, NCHR members were not allowed to visit the prison cells, as prison authorities said they could not guarantee their safety. When they asked to meet prisoners who were reportedly in deteriorating health conditions, their request was denied, and they were only provided with their medical files. Several leading Muslim Brotherhood leaders also refused to meet the delegation, accusing them of being “stooges” for the government.

Independent rights organizations are also critical of NCHR members, who are appointed by the president. The NCHR is accused of leniency with the government, and of covering up violations taking place in detention facilities. Late last year, the NCHR was harshly criticized when one of its leading members, Hafez Abu Saada, also director of the Egyptian Organization for Human Rights, praised conditions at Aqrab Prison, and agreed to be photographed while tasting the meals that are prepared for prisoners. A delegation visiting the same prison on another occasion excluded prominent rights defender and NCHR member Ragia Omran. The justification given for preventing Omran from joining the delegation was because her name was not provided to authorities in advance.

Among the most notorious police stations the NCHR has requested to visit is that in Cairo’s al-Matariya. According to a recent report by rights organization, the Egyptian Initiative for Personal Rights, at least 14 al-Matariya detainees have died in custody in the past two years. One of the most prominent cases was that of Karim Hamdi, a lawyer who was detained in February 2015 at the Matariya Police Station. Two days after his detention, he was dead, with a forensic report showing signs of torture including fractured ribs, electrocution marks, and a brain hemorrhage. The two National Security officers accused of torturing Hamdi were sentenced to five years imprisonment in December, and they continue to appeal their verdict.

Deaths in custody have also been documented in other police stations including Imbaba, Ain Shams, al-Salam, and others. The deaths of Talaat Shabib at a police station in Luxor and Afifi Afifi at a police station in Ismailia, both shortly after their arrests in November, led to widespread protests by local residents. In Shabib’s case, four officers and five policemen were immediately referred to trial in an attempt to calm public anger. In early February, police officer Mohamed Ibrahim was sentenced to eight years in prison and fined EGP5,000 after he was found guilty of beating Afifi to death.

Most recently, the story of Giulio Regeni, an Italian student who was found dead in Cairo after disappearing for nine days, has made international headlines. Egypt’s Interior Ministry has denied reports that he was detained before his death, especially as “signs of torture” were found on his body, according to local investigators and Italian doctors who examined his body. In the wake of cases of deaths that are known to take place in prisons or police stations—when families accused the police of torture—the Ministry of Interior typically issues statements denying any abuse or wrongdoing. They insist the inmates died either due to rapidly deteriorating health conditions, or after fighting with other inmates.

Lack of medical care in detention facilities has been a primary concern among rights organizations. The Nadeem Center for Rehabilitation of Victims of Violence and Torture reported 137 deaths in detention in 2015, including 81 deaths due to alleged lack of proper medical care. Another 358 detainees suffered medical negligence according to the report. The report said that 39 detainees died due to alleged torture and five were reported as suicides. Among those who died, there were seven reported cases at Matariya police station alone, nine at al-Wadi al-Gadid prison and five at Aqrab Prison. The same 2015 Nadeem report documented 700 cases of alleged torture, 267 of which are said to have taken place in police stations, 241 in public prisons, 97 at the headquarters of the National Security Department that deals with terrorism and political cases, and 26 at Central Security camps.

The Nadeem Center itself has come under increased scrutiny, and on February 17, received an order for closure from the Ministry of Health for violations, the nature of which are unclear. The Nadeem Center said in a statement that its lawyer, Taher Abul Nasr, was able to postpone the closure until Monday in order to clarify the ministry’s reasons for the decision.

Human rights organizations have also condemned over-crowdedness in police stations and prisons over the past two and half years, mainly due to the ongoing confrontation between police and supporters of the Muslim Brotherhood. In May of 2014, WikiThawra, a project of the Egyptian Centre for Economic and Social Rights, estimated that over 40,000 inmates had been held in prison since 2013. The Interior Ministry, however, strongly denies the figure, claiming the reports are fabricated. In an interview with Foreign Policy in February, Foreign Minister Sameh Shoukry described the estimate as a lie. Nevertheless, there is no official figure on the number of prisoners. In September 2015, former Prime Minister Ibrahim Mahlab told Hamdi Rizk, a columnist and talk show host, that there were around 8,000 detainees in Egyptian prisons.

At a minimum, the Interior Ministry has recognized that police stations—where suspects should be held only temporarily—are overcrowded. The ministry has said it is trying to improve conditions by providing air conditioning in several locations, as well as providing better medical care. Officials have also announced plans to build several new prisons to absorb the increasing number of inmates.