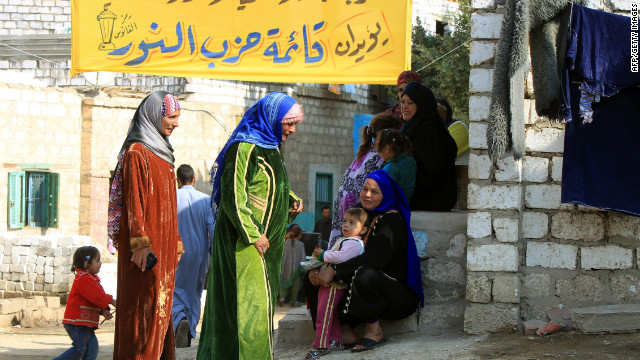 1) The third and final round of elections for the People’s Assembly concluded on January 4, amid reports of low turnout.  Counting is expected to begin later today, with final results expected on January 7 and a runoff round scheduled for January 10-11.  With a strong performance in the third round, which included the traditional Brotherhood strongholds of Gharbiya and Daqahliyya, the Freedom and Justice Party could hold an outright majority in the People’s Assembly, alongside other Islamist and Salafi parties with strong representation. Preliminary results show the FJP leading by a comfortable margin in districts in Daqahliyya, Wadi Gadid, Minya, and Qalubiyya, followed by the Salafi Nour Party with liberal parties trailing behind.  The Revolution Continues coalition is expected to make a strong showing in Mansoura, despite a disappointing performance in previous rounds. [New York Times, English, 1/4/2011] [al-Masry al-Youm, Arabic, 1/4/2011] [al-Masry al-Youm, Arabic, 1/4/2011]

2) Judge Mohamed Attia, minister of parliamentary affairs, stated on January 1 that presidential nominations will begin in April. He added that the presidential election will not take place before the new constitution is drafted and approved via a national referendum. [al-Ahram, English, 1/1/2012]

3) Anonymous high-level sources have reported that the Egyptian government may expand its investigation of foreign funding to include all organizations that receive international aid, regardless of the donor country. Preliminary findings of a Ministry of Justice report indicate that Egyptian Salafi groups have received nearly $50 million in funding from the conservative Gulf monarchies. On January 3, Kuwait’s ambassador denied that a Kuwaiti Islamic association had provided almost $19 million to the Egyptian Salafi group, Ansar al-Sunna. [Bikyamasr, English, 1/3/2012] [al-Dostor, Arabic, 1/4/2012]

4) Egypt’s public prosecutor is investigating four members of the April 6 Youth Movement who were recently arrested in Old Cairo while distributing flyers critical of the SCAF on charges of attempting to overthrow the military leadership and destabilize the country. April 6 released a statement accusing police officers of beating the detainees. [al-Ahram, English, 1/4/2012]

5) Hosni Mubarak’s trial resumed today after Prosecutor Mostafa Suleiman vowed to seek “the harshest penalty.” Mubarak is being prosecuted along with his sons, Alaa and Gamal, former Interior Minister Habib al-Adly and six senior police officers on charges of corruption and complicity in the deaths of around 850 protesters.  During the trial, the prosecution accused the Interior Ministry and the National Security Agency of being uncooperative and refusing to disclose official documents relevant to the investigation. [al-Masry al-Youm, English, 1/4/2011] [The Daily News Egypt, 1/4/2011]