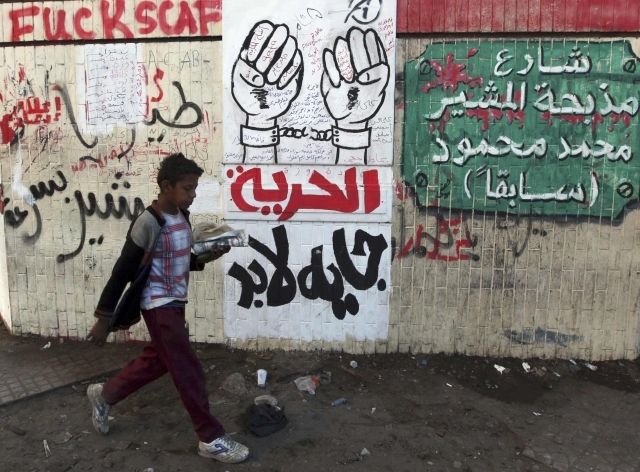 Four more people were killed in Tahrir Square in renewed clashes early on the morning of December 20, bringing the total death toll to at least 12. Meanwhile, the Revolutionary Youth Coalition and the “We Are All Khaled Said” Facebook group are backing an initiative to hold early presidential elections on January 25.

1) Four more people were killed in Tahrir Square in renewed clashes early on the morning of December 20, bringing the total death toll to at least 12. A doctor at the only remaining field hospital in the square reported seeing police and army forces fire live bullets into the crowd. [al-Ahram, English, 12/20/2011] [al-Masry al-Youm, English, 12/20/2011]

2) Thousands of women are marching from Tahrir Square to the Journalists Syndicate to condemn acts of gender-based violence during the latest clashes. The SCAF admitted that security forces used violence against female protesters on December 19, but asked the public to “consider the circumstances surrounding the beating.” [BikyaMasr, English, 12/20/2011] [al-Masry al-Youm, Arabic, 12/20/2011]

3) Twenty-one political groups and coalitions have launched the “Askar Kazeboon” (Lying Military) Campaign. The campaign aims to gather photos and videos as well as eyewitness testimony to disprove the SCAF’s false propaganda.  [The Daily News Egypt, 12/20/2011]

5) After a meeting with the remaining members of the Advisory Council (many of whom resigned in protest of the ongoing clashes), the SCAF agreed to the Council’s recommendations for an “immediate” end to violence, equal application of the law, condemning violations, and protecting the dignity of all citizens. The SCAF also agreed to bear the costs of rebuilding the historic Scientific Institute, where at least 200,000 books were destroyed in a fire over the weekend. [al-Masry al-Youm, Arabic, 12/20/2011] [al-Youm al-Saba’a, Arabic, 12/20/2011]

6) The Revolutionary Youth Coalition and the “We Are All Khaled Said” Facebook group are backing an initiative to hold early presidential elections on January 25. [al-Ahram, English, 12/20/2011]

8) In a speech on December 20, Secretary of State Hillary Clinton made a strong statement on the treatment of women in Egypt: “This systematic degradation of Egyptian women dishonors the revolution, disgraces the state and its uniform and is not worthy of a great people.” [AFP, English, 12/20/2011]

10) As the SCAF issued a statement condemning the media’s "incitement" against the military during ongoing violence near the Cabinet building, dissenting state media reporters are accusing the military of censorship. Ziad Ali, an anchor for the state-owned Radio Masr, Ziad Ali, was notified on December 18 that his program “Tel’et Shams El-Naharda” (Today’s Sun Has Risen) has been suspended, following a broadcast in which he criticized SCAF communiqué No. 90, which was released with a video depicting civilians vandalizing the Cabinet building. [The Daily News Egypt, English, 12/20/2011]