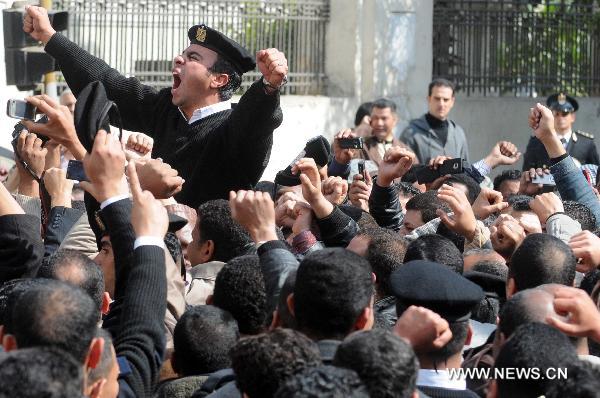 The Coalition of the Revolution Youth is calling for a “Friday of defending the revolution” on October 28 to demand a transfer of power to an elected civilian government by April 2012. Meanwhile, low-ranking policemen continued their sit-in for a third day straight outside of Interior Ministry directorates in Cairo and other provinces, demanding improved working conditions and the dismissal of ministry officials connected to the former regime.

As a number of parties and movements call for a major demonstration on Friday, October 28 to demand presidential elections by May 5, 2012, Islamist presidential candidate Mohamed Selim al-Awa urged Egyptians to refrain from protests for the sake of maintaining stability during the election period. [Al-Masry al-Youm, English, 10/26/2011]

The Coalition of the Revolution Youth is calling for a “Friday of defending the revolution” on October 28 to demand a transfer of power to an elected civilian government by April 2012. [Al-Ahram, English, 10/26/2011]

Low-ranking policemen continued their sit-in for a third day straight outside of Interior Ministry directorates in Cairo and other provinces, demanding improved working conditions and the dismissal of ministry officials connected to the former regime.  In Cairo, police protesters began a hunger strike and demanded the resignation of Interior Minister Mansour al-Essawy. Ministry officials met with a delegation of protesters and agreed to meet 14 demands, but said that the reforms could only be implemented through military decree by the SCAF. [Al-Masry al-Youm, Arabic, 10/26/2011] [Al-Masry al-Youm, English, 10/26/2011] [Al-Shorouk, Arabic, 10/26/2011]

Deputy Interior Minister Abdel Latif al-Bidiny appeared on state television to affirm that the Interior Ministry is working to restructure Egypt’s police force. Al-Bidiny said that the police apparatus needs tob be replaced by a totally new structure, but only after the political and security situation has stabilized. [Al-Masry al-Youm, English, 10/26/2011]

The Cairo-based Nadeem Center for the Rehabilitation of Victims of Violence and Torture issued a report claiming that military police sexually assaulted and denied medical care to some of those detained during clashes outside of Maspero. [Al-Ahram, English, 10/26/2011]

After police protesters threatened that they will not work to secure the parliamentary elections in the absence of concessions by the Interior Ministry, SCAF member Hassan Ruwaini outlined a plan for maintaining security during the polling process, saying that military personnel will cooperate with civilian police in all governorates. Ruwainit warned that the armed forces will use “an iron fist” against anyone seeking to compromise the integrity of the elections. [Al-Shorouk, Arabic, 10/26/2011]

The Democratic Alliance will compete for 100 percent of the seats in the People’s Assembly. After the defection of several parties including the Wafd, the Alliance now includes eleven parties, including the Brotherhood’s Freedom and Justice Party, which has been heavily criticized by other members for attempts to dominate the joint electoral lists. On October 25, the Social Peace Party became the latest to back out of the Alliance, saying it will boycott the elections over the FJP’s attempts to “marginalize” other alliance members. The Social Peace Party accused the FJP of violating a previous agreement with Alliance members to limit its proportion of seats to 35 percent. On October 23, the head of the Alliance’s electoral coordinating committee announced that FJP candidates are now competing for 75 percent of the People’s Assembly and Shura Council seats, as a result of the refusal of several parties belonging to the Alliance to compete for individual candidacy or Shura seats (which had the effect of inflating the representation of FJP candidates on the Alliance lists). [Al-Masry al-Youm, Arabic, 10/25/2011] [Al-Masry al-Youm, Arabic, 10/23/2011]

The Foreign Ministry announced that it has a comprehensive plan to facilitate voting for Egyptians abroad, following an October 25 administrative court ruling that granted expatriates the right to vote in the upcoming parliamentary elections. A ministry spokesman stressed that Egyptian embassies and consulates abroad will bear responsibility for administering the polling process. Meanwhile, the Interior Ministry announced plans to dispatch official delegations to the United States, Canada, Britain and France to issue national identification cards and other official documents for Egyptians abroad. [Al-Masry al-Youm, English, 10/26/2011] [Al-Ahram, English, 10/26/2011]

A new group called Egypt Above All has launched a campaign urging Field Marashal Tantawi to run for president under the slogan, “A popular demand for stability.” The coalition’s coordinator, Mahmoud Attia, said the group is a “representative of the silent majority which sees Tantawi as the best candidate … and the only one capable of leading the country towards real democracy.” Meanwhile, hundreds of posters promoting Tantawi’s presidential candidacy have appeared in several districts of Cairo and Alexandria.  [Al-Arabiya, English, 10/26/2011] [Huffington Post, English, 10/26/2011]

Members of the Press Syndicate are voting to select a new board and chairman for the union, after operating for years under s syndicate leadership dominated by NDP members. [Al-Ahram, English, 10/26/2011]

Egypt has refused to release five Israelis convicted of espionage as part of the prisoner swap deal to be implemented with Israel, according to an Israeli radio report citing Egyptian sources. Egypt intends to keep the five detainees for future negotiations. [Al-Masry al-Youm, English, 10/26/2011]

Finance Minister Hazem al-Beblawi warned that government borrowing from domestic lenders is nearing its limit, and the government will need to seek additional financing from abroad. Egypt is due to begin talks this week with the International Monetary Fund, four months after it turned down a US$3.2 billion assistance package. [Al-Ahram, English, 10/26/2011]

Finance Minister Hazem al-Beblawi met with France’s special envoy to discuss the $38 billion in G8 aid promised to the Arab world and requested additional details on how Egypt will benefit from the pledge. [Al-Ahram, English, 10/26/2011]