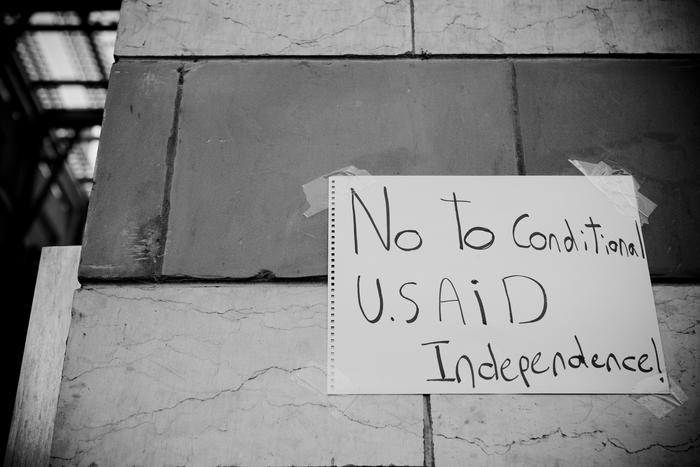 The trial of 43 Egyptian and international NGO employees began in Cairo on February 26. None of the American citizens among the accused were present at the opening session, reportedly because none of them had received official summons from the court. All present defendants pleaded not guilty to all charges without bail, and were released until the next session on April 26.

1) The People’s Assembly has approved amendments to articles 30 and 38 of the law on presidential elections, which will be referred to the Supreme Constitutional Court for a decision on the amendments within 15 days. The two amendments deal largely with procedural issues, and the most heated debate during the session was over a different article, No. 28 (not yet amended), which defines the decisions of the Presidential Elections Committee (PEC) as authoritative and immune to appeal. [al-Masry al-Youm, Arabic, 2/27/2012]

2) Presidential hopeful Ahmed Shafiq launched a verbal counter-attack against former presidential candidate Mohamed ElBaradei, accusing his political rival of being “unpatriotic” and implying that during his tenure as head of the IAEA he contributed to Iraq’s difficulties. ElBaradei has publicly stated that he considers Shafiq a former regime figure and his nomination to be against the revolution. [al-Masry al-Youm, English, 2/27/2012] [al-Masry al-Youm, Arabic, 2/27/2012]

4) The trial of 43 Egyptian and international NGO employees began in Cairo on February 26. None of the American citizens among the accused were present at the opening session, reportedly because none of them had received official summons from the court. All present defendants pleaded not guilty to all charges without bail, and were released until the next session on April 26. [al-Ahram, English, 2/27/2012]

5) The People’s Assembly and Shura Council will hold a joint session on March 3 to select members of the constituent assembly tasked with drafting Egypt’s new constitution, Field Marshal Tantawi announced. The announcement comes amid controversy over the results of the recent parliamentary elections, after the Supreme Administrative Court referred several articles of the electoral law for judicial review, over concerns that they may be unconstitutional. The High Constitutional Court will now rule on the constitutionality of provisions allowing party members to compete for the one third of seats reserved for individual candidates in the People’s Assembly election. If deemed unconstitutional, part of the election may need to be re-run, leading several prominent figures including former presidential candidate Mohamed ElBaradei to recommend postponing the selection of the constituent assembly until after the dispute is resolved. [al-Ahram, English, 2/27/2012] [al-Youm al-Saba’a, Arabic, 2/27/2012]

6) Major political figures have objected to the FJP’s proposed criteria for choosing the 100-member constituent assembly, which gives parliament significant control over the selection process. Last week, senior Brotherhood leader Essam al-Arian suggested that the committee should be comprised of up to 40 members of the People’s Assembly and Shura Council, 30 public figures selected by members of the two houses and 30 figures chosen by syndicates, unions, the Al-Azhar institution and the Egyptian church. Several liberal and independent MPs expressed concern that the high threshold (40%) for members of parliament would give Islamists disproportionate influence over the committee. Several MPs have drafted a counter proposal requiring that all members of the committee be elected from outside of the parliament. The FJP’s draft bill has been presented to the speaker of parliament for revisions and will be discussed in a joint session later this week. [al-Ahram, English, 2/27/2012]

7) On February 27, parliament referred MP Ziad El-Eleimy of the Egyptian Social Democratic Party to parliament’s ethics committee for questioning following accusations that he had insulted Field Marshal Tantawi, head of Egypt’s ruling military council, and a prominent Salafi preacher. El-Eleimy has since demanded that his remarks about Tantawi be referred to the Arabic Language Academy for interpretation. [al-Ahram, English, 2/27/2012]

8) MPs from al-Gama’a al-Islamiya’s Building and Development Party, the Wafd Party, the Karama Party and the Salafi Nour Party submitted a draft law requesting amnesty for all political prisoners detained since the assassination of Sadat until Mubarak’s resignation on February 11. [al-Ahram, English, 2/27/2012]