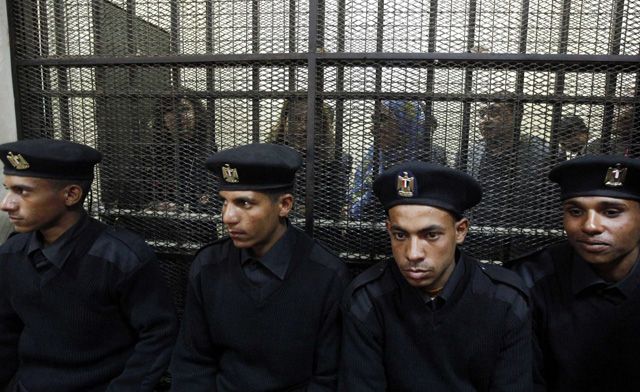 Egypt has appointed new judges to hear the trial of 43 NGO employees, after six Americans among those charged left the country with nearly $5 million in bail posted.  The first hearing in the new trial is scheduled for March 8.

1) Egypt has appointed new judges to hear the trial of 43 NGO employees, after six Americans among those charged left the country with nearly $5 million in bail posted.  The first hearing in the new trial is scheduled for March 8. [AP, English, 3/5/2012]

2) International Cooperation Minister Fayza Aboul Naga claimed she did not know the travel ban on indicted foreigners had been lifted until she read about it in newspapers after the fact. [al-Ahram, English, 3/5/2012]

3) On March 5, members of the People’s Assembly legislative affairs committee demanded an investigation into the involvement of Field Marshal Tantawi and the ministers of justice and aviation in “smuggling suspects” in the NGO trial out of Egypt. [al-Shorouk, Arabic, 3/5/2012]

4) State Department spokesperson Victoria Nuland said in a statement on March 3 that the NGO issue is a matter of serious continuing concern for the United States, but affirmed that relations with Egypt are “strong.” “Despite the recent strains, and differences on certain issues, the fundamentals of this strategic relationship remain strong,’’ she said. [AP, English, 3/5/2012]

5) In a joint session of parliament on March 4, liberal as well as Islamist MPs condemned both the US and the government of Prime Minister Kamal El-Ganzouri over the abrupt departure of the indicted American NGO employees. Parliamentary Speaker Saad al-Katatny led the charge, saying the secrecy surrounding the lifting of the travel ban was “unacceptable” and warning that "El-Ganzouri, along with a handful of government ministers, will be summoned to parliament on 11 March to face questioning over the issue.” Liberal MP Ziad Bahaaeddin went so far as to call for severing relations with the US. Relations should be cut with any state that violates Egypt’ dignity," asserted Bahaaeddin, who went on to charge the Ganzouri government with "grand treason" for "caving in to US pressure." [al-Ahram, English, 3/5/2012]

6) The People’s Assembly and Shura Council convened for a joint session on March 3 to begin discussing the selection of the 100-member constituent assembly that will write Egypt’s next constitution. In the preliminary session, there were already signs of tension between liberal and Islamist MPs over the composition of the committee. The Brotherhood’s FJP has proposed allocated 40 of the committee’s seats to members of parliament, while liberal groups fear that such a high threshold for MPs would marginalize women and religious minorities, who are underrepresented in parliament. [Reuters, Arabic, 3/5/2012]

7) Salafi Nour MP Anwar El-Balkimy was expelled from his party and resigned from the People’s Assembly after lying about his recent nose job.  El-Balkimy claimed to have been assaulted by a group of masked gunmen while on the Cairo-Alexandria desert highway and attributed the bandages on his face to injuries sustained during the attack. However, it has since been revealed that El-Balkimy underwent plastic surgery and lied about the attack. [al-Ahram, English, 3/5/2012] [al-Masry al-Youm, Arabic, 3/5/2012]

9) Egyptian security officials are reporting a significant increase in weapons smuggling across the Libyan border. A total of 576 weapons including modern sniper rifles were seized by police in the last three months in the Egyptian oasis of Siwa near the Libyan border. The number of weapons reaching buyers undetected is believed to be five times the number seized. According to Egyptian officials, residents of southern Egypt, where extended families often accumulate large arsenals to protect property and settle feuds, are the main buyers. [AP, English, 3/5/2012]

10) State Department spokesperson Victoria Nuland said the United States is continuing to support the efforts of the IMF to conclude an economic reform program with Egypt. [AP, English, 3/5/2012]

11) Egypt’s foreign currency reserves declined in February by the smallest amount in more than a year, buying the government a little more time to secure a $3.2 billion loan from the International Monetary Fund. Net official reserves fell about $640 million to $15.7 billion, according to central bank data released today, down from an average monthly decline of $1.1 billion. [Bloomberg, English, 3/5/2012]