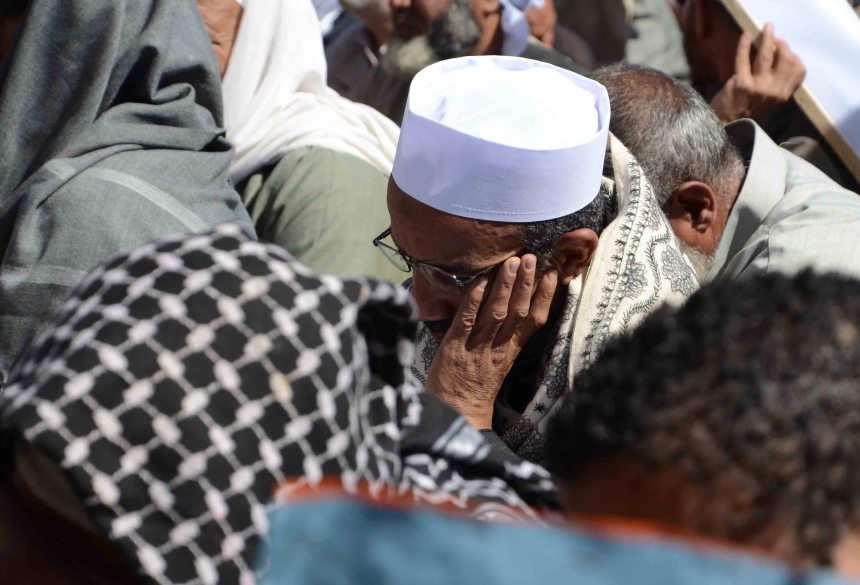 Cynics throughout Egypt could only smirk. Thousands of Islamists protested against the recent wave of political violence, answering the call of one of its most notorious perpetrators, the Jama’a Islamiya. Throughout the 1990s they led an armed campaign against the Mubarak regime, as well as targeting tourists in a bid to discredit the state.

In the early 2000s, beaten and discredited themselves, the Jama’a Islamiya issued its famous ‘Revisions’. Jailed leaders reconsidered their violent philosophy, publishing tomes on the errors of their way. They also reconciled with the government, securing release from prison for many. Since then the group has largely laid low, at least until the revolution.

Like others in the formerly forbidden Islamist trend, the Jama’a Islamiya took advantage of new political freedom to form a party, Building and Development. They allied with the Salafi Nour Party but played second fiddle, offering their popular support especially in Upper Egypt in exchange for a handful of parliamentary seats. But as Egypt descended into a morass of political chaos and violence, it was the Jama’a Islamiya which took the lead in condemnation. The question is, why?

Cynical reasons abound. Now that the Islamic trend has apparently ‘won’, violence is no longer necessary. Their confidence is in the political path, believing they are poised to dominate. If not for the ‘Revisions’, this explanation might suffice.

“When the Jama’a Islamiya says ‘no’ to violence, we have more credibility than anyone else,” said Sharaf al-Din al-Gibali, a party leader in Fayoum. “Why? We engaged in an armed struggle with the regime for over ten years. We finally realized violence is not a suitable path to power, under any circumstances.”

In fact, it is concern for the opposition that is a large part of their motivation. “We have tried this path already,” he continued, “so for those who are trying it now we are worried for them.”

Of course, their altruism is mixed with political objectives. “There are good and winsome members of the opposition, but as a whole they are quarrelsome and they are divided in their ideologies,” he said.

“So we want to neutralize it and attract them to us, to listen to them and let them listen to our experience with violence.”

But beyond politics there is a fearful self-preservation. “We are worried that a cell will emerge and commit violence,” he said. “People may recall our past and ask who has been violent before? We are holding this demonstration to demonstrate our innocence from this possibility.”

If Gabali is repentant of the Jama’a Islamiya past, however, this does not necessarily translate to the belief of all members.

“We are not a violent group but responded to violence because they [Mubarak’s regime] attacked us,” said Ahmed al-Tayyib, the Jama’a Islamiya financial manager in Assiut. “They killed our sheikhs in the pulpits and destroyed our fields in Upper Egypt.”

Though he welcomes the ballot box and defends the rights of the opposition, the Jama’a Islamiya’s history gives him a sense of entitlement. “We were the first to oppose Mubarak and we deserve to take our place.”

‘Taking our place’ appeared to be a theme among the more common demonstrators, who showed less magnanimity. Not a few violent chants resounded from the stage, including the now common “Khybar, Khybar, oh Jews, the army of Muhammad will return,” referring to the predominantly Jewish city in 7th Century Arabia against which Muhammad achieved a decisive victory, and, “To Jerusalem we go, millions of martyrs.”

“What is happening now is the empowerment of Islamists and if God wills he will help us soon to rise against Israel,” said Mohamed Ahmed, an unaffiliated clothes merchant who leans in support of the Jama’a Islamiya. “We are against violence among ourselves; God has forbidden a Muslim to shed the blood of another.”

By ‘among ourselves’ Ahmed meant all Egyptians, even though he labeled the opposition as troublemakers. He believed Mahmoud Shaaban’s recent fatwa authorizing their death was near-appropriate.

“ElBaradei and the others spread corruption in the land and call for rebellion against the authorized leader,” using a traditional phrase from Sunni Muslim jurisprudence. “Sheikh Shaaban simply mentioned the hadith that says such as these deserve death, but those with him on the program convinced him this issue must go to the Azhar.”

Ahmed has a distaste for politics in general, but the times are changing. “There is a jurisprudence of reality; if the people now want ballot boxes, we will use them,” he said.

“We entered into political parties to be able to reach the ability to govern, and not just preach. If you only preach they can shut you down.”

As Egypt grows in political consciousness, it is difficult to gauge the sincerity of discourse. On the liberal side, for example, the National Salvation Front tries to straddle the fence on benefiting from street violence, without actually calling for it or endorsing it. Many of their partisans, however, would answer just as injudiciously as Ahmed.

But Egyptians are growing in political consciousness, even Ahmed. If the ballot box is simply the jurisprudence of reality, will they remain? Will empowered Islamists permit a secular opposition?

It was as if a trigger was switched and he remembered the proper answer. “No, the ballot box will stay,” he said with a big smile. “I know our people, they are all religious, both Muslims and Christians. They will choose us.”