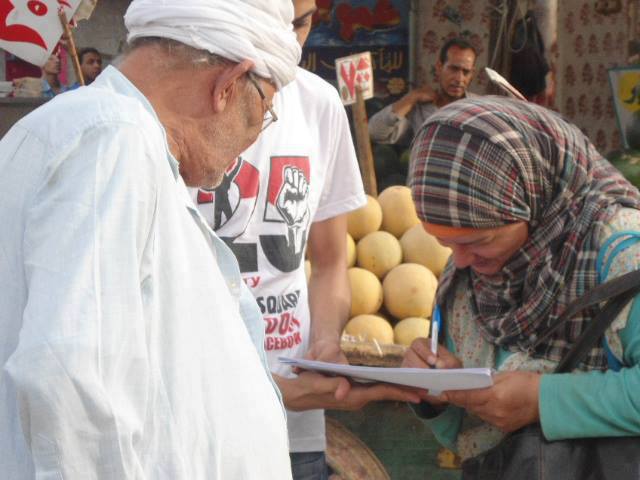 In politics, it is wrong to expect that successful popular campaigns with substantial demands will achieve results immediately. I am putting this in writing, to confirm statements I have already made in Egyptian media about the Tamarod, or ‘rebellion,’ campaign.

Tamarod’s main demand is a call for early presidential elections, in response to the collapse of the president’s moral legitimacy.  This collapse is a result of repeated human rights violations, doing away with the independence of the judiciary, poor management of the government, the absence of transparency about his policies and practices, and the interference of the Muslim Brotherhood in decision-making without democratic support.  The strategies of the Tamarod campaign consist of a peaceful mobilization of popular pressure by inviting citizens to sign petitions declaring their loss of confidence in the president and demanding early presidential elections.  The group employs this strategy in a decentralized way across urban and rural areas.

Tamarod ‘s demands and methods are without question legitimate democratic activities, which undoubtedly have immediate, favorable outcomes.  In my opinion, the most important of these favorable outcomes can be found in the revival of peaceful, popular protest in the Egyptian streets. This stands in contrast to the cycles of violence and counter-violence that have marred the past few months, from the attacks on the presidential palace to the clashes outside the Muslim Brotherhood headquarters.  It also stands in contrast to the slogans of political blocs and parties, which lost a great deal of their credibility due to the weakness of their influence and their limited popular appeal.

However, the youth of Tamarod and those citizens who have signed the campaign’s petitions are mistaken if they assume the inevitability of achieving their ultimate demands, that is, a popular declaration of no-confidence in the president and early presidential elections.

Even if it continues to gather signed petitions, Tamarod will only succeed in expressing the views of those segments of the Egyptian people who have lost their confidence in the president and are favorably disposed to early elections.  The campaign ought not to ignore the existence of other segments of society that support Dr. Mohamed Morsi and want him to continue in his post.  The campaign, which has my full backing and support, does not have a monopoly on the Egyptian street but is instead dealing with a society whose citizens have various and diverse political orientations.

Recognizing the true diversity and variety of opinion in society regarding the president does not mean that the youth leaders of Tamarod should retreat or stop their peaceful mobilization of popular pressure in favor of early elections.  It is simply necessary for them to be forthright with the people about the possibility that their goals will not be achieved and that the nature of the mobilization of popular pressure is a gradual, long-term project.

In other words, in a way that is irresponsible both popularly and politically, the movement has raised the expectations of citizens who are searching for change in the institution of the presidency.  It has directed these hopes toward what is portrayed as the inevitable attainment of early elections and creating the impression that the June 30th 2013, the one year anniversary of his inauguration, will be the day of the duly elected president’s departure. However, the Egyptian street does not unanimously support the "Rebellion."  There are segments of society that support the president just as we oppose him.  Likewise, in a manner that is irresponsible both popularly and politically, Tamarod has put forward spurious legal claims stating that one must simply gather a number of signed forms (15 million), verify them (in the Real Estate Publicity Department of the Ministry of Justice), and present them to a particular legal body (the Supreme Constitutional Court).  They suggest that this would necessarily express a popular vote of no confidence in the president and would lead to early elections.  However, neither the constitution nor Egyptian law contains such stipulations.  There are no international norms or precedents that indicate the necessity of removing a duly elected official when certain broad sections of society reject his administration.

The responsible thing to do, both popularly and politically, is for the leaders of the Tamarod Campaign to restate their commitment to democracy and to affirm both the justice of their demands and the peacefulness of their movement.  Likewise, they should confirm that they are in favor of a gradual application of popular pressure toward their ultimate goal of early elections, acknowledging that the duly elected president has the backing and support of certain segments of society. The responsible thing to do, both popularly and politically, is to emphasize a gradual buildup of political pressure in a general sense.  In addition, they must emphasize the nature of their political goals, including early presidential elections, a democratic constitution, a legitimate parliament, and the protection of human rights.  Its goals will not be reached through legal means but will be achieved by pushing for just principles and just goals and with the same immense strength and perseverance and that is to be expected of both competing actors: the religious right and secularist forces.