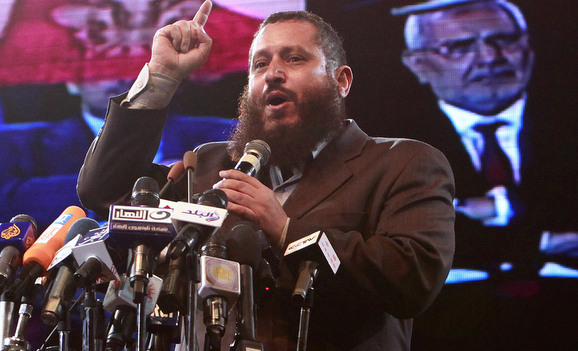 A rift within the Salafi Nour Party over the organization’s leadership has been contained, but the very public dispute has left several unanswered questions about the Islamist movement in its wake. Are the disputes within the Nour Party related to an inability to take a truly democratic approach within the party ranks? And while resolved, has the dispute opened the door to other Islamist parties taking the lead in the upcoming parliamentary elections?

Disputes over internal party elections were initially covered up, the truth only coming to light after the public resignation of several members. In an attempt to contain the conflict, party head Dr. Emad Abd al-Ghafour simply canceled the elections. Twelve senior party members responded by pushing forward with elections, while also calling for Abd al-Ghafour’s resignation.

The struggle came to an eventual end when members of the Salafi Calling [al-Da’awa al-Salafiyya], the committee from which the Nour Party was born, took steps to resolve the discord. Their efforts resulted in reconciliation between the two disputing factions and a renewed confidence in Dr. Abd al-Ghafour as Party Chairman.

The internal squabble could be seen not only as a result of the Salafi movement’s resistance to democracy, but also as a result of its late entry into Egyptian politics. The Nour Party itself emerged out of a number of Salafi organizations, receiving both financial and logistical support from the greater Salafi movement, which in turn is supported by Saudi Arabia. Unlike the unified Muslim Brotherhood, the Salafi movements do not work as one cohesive group; they are parties that do not believe in democracy but are compelled to deal with it out of necessity.

During the Mubarak era, the Salafi movement abstained from political participation because they considered democracy a Western system of governance, one which does not conform with their Islamic values. The Salafi Calling often rebuked the Muslim Brotherhood for participating in Mubarak’s political game. After the January 2011 uprising, Islamist apprehension that secular movements would take control of the government pushed the Salafi Calling to enter the political arena, forming the Nour Party, together with a number of Salafi organizations.

In last year’s parliamentary elections, the Nour Party’s Islamist Coalition, secured 24% of the seats in the People’s Assembly. The party then sought to fully implement Islamic Sharia. This effectively pushed them to the right of the Muslim Brotherhood’s Freedom and Justice Party (FJP), which called instead for a gradual implementation of Sharia.

A bemused Egyptian public watched on as individual Salafi politicians displayed their political naïveté in the newly elected parliament; calling for a ban on teaching English in schools, labeling it the ‘language of infidels,’ interrupting a parliamentary session with the call to prayer; and worst of all MP Anwar al-Balkimi claiming that he was assaulted and mugged by two men – the truth later emerging that he had in fact had a nose job.

This inexperience coupled with fractures within the second largest Islamist party could be of benefit to newly formed conservative parties. Among them is the ‘Egyptian Umma Party’ (al-Umma al-Misriya), formed by Sheikh Hazem Salah Abu Ismail. Disqualified from the presidential race on a technicality, Abu Ismail demonstrated his popularity during his bid for presidency, and as a result offers a viable alternative to the Nour Party. Abu Ismail’s vision includes a uniform leadership for the Salafi movement, currently plagued by internal disputes due to the fact that a personality around which the Salafis can rally has not emerged.

On the other hand, former Brotherhood member Dr. Abdel Moneim Abul-Futuh’s party – ‘Strong Egypt’ (Misr al-Qaweya) provides a political avenue for moderate Islamists. Together, Abu Ismail and Abul-Futuh have aligned themselves more closely with the revolutionary demands, in comparison to the Nour Party and the Brotherhood’s FJP.

These new Islamist parties already sought to highlight the differences between themselves and the Muslim Brotherhood by criticizing President Mohamed Morsi’s policies. By so doing, they hope to also take advantage of the Brotherhood’s mistakes offering voters an alternative to the FJP.

If the secular parties do not truly succeed in coming together as a powerful political body in the upcoming elections, these new Islamist parties may instead be able to benefit from the errors of the Islamist parties that came before them. As a result, we may see a new composition in the coming parliament, in which the majority held by the FJP and Nour will go to Aboul Futuh and Abu Ismail’s parties instead. There is also the possibility that the members of the now-defunct National Democratic Party may secure a higher percentage of representation in the coming elections if a strong civil coalition does not emerge.