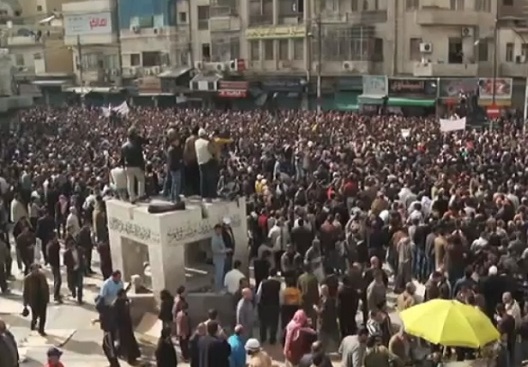 One year ago, Jordan witnessed some of its worst protests in recent memory. Thousands of citizens spilled in to the streets of Amman, Irbid, and other major cities, protesting a hike in fuel prices and chanting, ‘The people want the overthrow of the regime.” As demonstrators attacked police stations and set cars on fire, observers wondered if the unrest signaled a turning point for Jordan. One year later, the answer is clear: The protests were a precursor to nothing. While the protests certainly marked an important moment in the history of Jordan, when citizens temporarily defied the taboo against criticizing the king, they did very little to change the situation on the ground. When a small number of protesters in Amman gathered on November 16 to mark the one-year anniversary of the fuel protests, the slogans were geared not towards the king but towards the prime minister, signaling a return to the pre-November 2012 status quo.

The defining feature of the Jordanian mindset at this moment is, ‘At least we’re better off than, [insert any Arab Spring country].’ One Jordanian recently told me that the “spring” in Arab Spring was not a season of renewal and new beginnings, but a literal spring that if compressed, will launch back up, bouncing uncontrollably and causing chaos. Despite the clumsy metaphor, the message is clear: our system is not perfect, but we do not want to rock the boat. If we push for a little, we will end up with much more than we bargained for.

There is no question that the average Jordanian is uninterested in putting stability on the line for political reform, but if this is the case today, how did last year’s protests come to be?

The protests began in response to Prime Minister’s Ensour’s announcement that fuel subsidies would be lifted, leading to a significant rise in prices. The protests, like those that took place throughout the region during the Arab Spring, combined a motley group of previously unaligned interests. Many participants were chronic protesters, people who have in the last few years made Friday afternoon protests a weekly habit. This group includes youth activists and the Islamic Action Front, Jordan’s recognized branch of the Muslim Brotherhood. For these activists, fuel subsidies represented only part of reason to take to the street; they also protested larger issues—including government corruption and the cosmetic nature of the King’s recent reforms.

The difference between last year’s protests and previous weekly occurrences in downtown Amman lies in its membership. In 2012, many first timers—poor Jordanians, who were first and foremost concerned about the effect that the price hikes would have on them and their family—joined these chronic protesters. The more politically active amongst the protesters tried to coopt the new comers into their movement, perhaps believing that the larger the protests, the more the political cover to push their critique of the government. Many new demonstrators felt uncomfortable with the anti-regime tone of the protests; in fact, it is possible that this extreme rhetoric led to the protests petering out. There was a reason that these newcomers had not been protesting up to that moment: they were only marginally interested in political reform, let alone regime change.

The Jordanian government survived the fuel protests by patiently waiting them out. The police, for the most part, behaved responsibly and the king and prime minister took the opportunity to advertise reform initiatives as represented by the elections scheduled for the following January. Eventually the protesters went home.

Ultimately, last year’s events did not transform Jordan or even speak to a new Jordanian mindset. Jordanians still struggle economically, and may suffer under more price hikes in the near future. It remains unclear what type of backlash economic reforms may provoke, but it seems to Jordanians that the consequences for demanding political reform in Syria and Egypt involves a cost they are unwilling to pay.

Hannah Grigg is a research assistant at the University of Jordan.