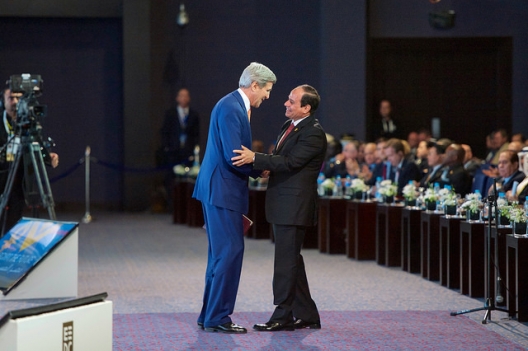 The Egyptian presidency issued a report Sunday detailing President Abdel Fattah al-Sisi’s achievements over the past year, listing twenty-four ‘nontraditional’ achievements including Egypt’s Economic Development Summit held in March as his only economic achievement. Other achievements, according to the report, include donating half his salary to the Long Live Egypt fund, taking part in a bike marathon and Cairo Runners’ marathon, and Sisi’s first phone interview.  In the public eye, however, Egypt’s diplomatic developments under Sisi are considered among the president’s significant achievements. Since his election, the US has resumed military aid to Egypt, he has exchanged multiple visits with Russian President Vladimir Putin, and Egypt has been readmitted into the African Union. While the international community expressed concern over Egypt’s role in Libyan internal affairs, Egyptians praised airstrikes on two Libyan cities in the wake of the beheading of twenty Egyptian Christians.

Since Morsi’s ouster, however, Egypt-Turkey relations have soured. Turkish President Recip Tayyip Erdogan has been the most outspoken foreign leader critical of the removal of the Muslim Brotherhood president, and has condemned the international community for not taking a similar stance. Meanwhile, crticisms from the Gulf state of Qatar eased over the past year, with Saudi-led efforts to reconcile the two Arab countries. The death of Saudi King Abdullah bin Abdul Aziz has led some to believe that the rapprochement is over, and Qatar expressed its reservations of Egypt’s role in airstrikes in Libya. Under Sisi, relations with Turkey, on the other hand, have only worsened, with Erdogan describing the Egyptian leader as tyrant. Under Sisi, Egypt also concluded a 5.2 million Euro deal with France to purchase twenty-four Rafale jets. French banks are financing at least half of the deal.

Following is a summary of key events in Egypt’s most important foreign policy relations with Egypt’s allies:

Several months before the election of President Abdel Fattah al-Sisi, and for the first time in over thirty years, the United States suspended military aid to Egypt. While the United States supplies $1.3 billion in military aid to Egypt annually, in October 2013, the US suspended “the delivery of certain large-scale military systems and cash assistance to the government pending credible progress toward an inclusive, democratically elected civilian government through free and fair elections.”

In the year since Sisi’s election, the US announced it will resume military aid to Egypt, while Congress is discussing an appropriations bill which removes the need for the State Department to certify Egypt’s democratic progress.

Significant milestones in the wake of Morsi’s ouster and prior to Sisi’s election include:

A tumultuous Egypt-US relationship continued into Sisi’s presidency, with the eventual decision to resume military aid to Egypt taken in March 2015.

In 2014, trade between Russia and Egypt reached $3 billion, which according to President Vladimir Putin, reflected a 50 percent rate of growth. That same year, 3 million Russian tourists visited Egypt. While a strengthening of ties has been seen between Russia and Egypt, including a reported $3.5 billion arms deal, observers argue that Sisi does not see Russia as a replacement for the United States. The relationship, they argue, is an attempt to pressure the US into releasing suspended military aid.

Prior to the revolution of 2011, an estimated 2 million Egyptian expatriates were living in Libya. However, as of mid-February 2015, the number has dropped to around 200,000.

Ethiopia has gained importance in Egyptian foreign policy only so far as its plans to build the Grand Ethiopian Renaissance Dam (GERD) and how it impacts Egypt. When a plan for the dam was announced in 2011, tensions were high between Egypt and Ethiopia, culminating with a meeting of Egyptian politicians and leaders led by Morsi aired live on Egyptian TV unbeknownst to them, as they suggested arming Ethiopian rebels destroying the dam. A few months later, the Ethiopian Foreign Ministry refuses Egypt’s request to halt construction on the dam.

Under Sisi, the tension has eased. In March 2015, in an interview aired on Ethiopian TV, he said “We are taking about a new era between Egypt and Ethiopia,” during a visit to the country. He also noted that 55 million Egyptians work in agriculture.

Sisi’s recent visit to Germany came at the invitation of German Chancellor Angela Merkel. His visit to Berlin was previously conditional on Egypt holding parliamentary elections. That stipulation was removed after the delay of the elections.