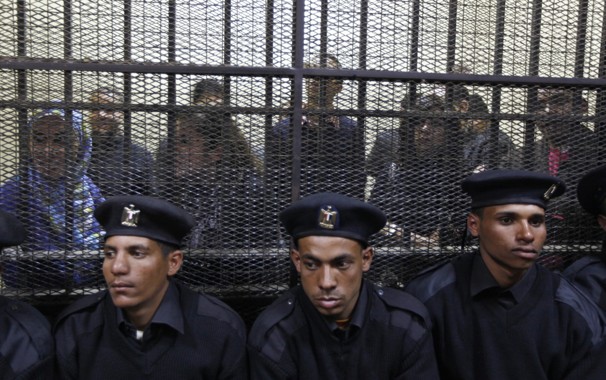 For the past year and a half, Egypt’s NGOs have been targeted through a systematic chain of repressive violations, culminating in an orchestrated smear campaign led by the Supreme Council of Armed Forces (SCAF) and its interim cabinets. During this transitional period, the prospects of civil society and human rights advocacy in Egypt faced several endangering threats. The current government is now faced with archaic laws that are in need of change if civil society is to thrive going forward.

Various NGOs were targeted because of their role in exposing human rights violations committed by the former regime. It was these very violations that paved the way not only for the January 25th Revolution, but also for continuous pressure towards fulfilling the people’s demands after Mubarak’s ouster.

Under SCAF’s rule, human rights organizations tried to contribute to what they hoped would be a democratic transition. NGOs advocated for the adoption of several democratic initiatives aimed primarily at providing a legislative and reformist platform for the restructuring of state institutions. SCAF’s lack of political will to restructure state institutions on the one hand, and NGO pressure from the other is believed to be one of the main reasons behind SCAF’s smear campaign against civil society groups, which was put into motion by the Ministry of Planning and International Cooperation.

Violations against NGOs were legitimized by a legacy of repressive legislation, the main role of which was to whitewash the regime’s appearance. A repressive NGO law regulated civil society and ensured NGO’s human rights advocacy programs had limited impact.  The law guaranteed that conditions under which the NGOs operated were restrictive, with sources of funding and all activities monitored and subject to state security approval.

The wording of the law was intentionally ambiguous, making it easy to prohibit organizations from engaging in political or trade union activities, facilitating state repression of NGOs.  It also prohibited foreign funding in all its forms (donations or grants) without advance approval of the Minister of Social Affairs. This prohibition was often used to limit these organizations’ activities and outreach, within a wider systematic process of silencing the opposition, by making it impossible for organizations to criticize the government for the violations committed.

After Mubarak’s ouster, NGOs tried to change the law, to ensure it respected the universal standards of freedom of association and guaranteed the existence of a free civil society in Egypt that could advocate for human rights. Around 39 NGOs signed a new draft law that met these standards, while also taking the Ministry of Social Affairs’ power over NGOs away.

Around the same time, the government launched an investigation into several organizations following a statement by US Ambassador, Anne Patterson that local groups had received more than $40 million in funding from the US government. Her statements galvanized suspicions about NGO funding, and were a major push for what came next.

Measures were taken to limit the funding of organizations, as was the case with the "New Woman Foundation", CEWLA, a feminist organization, and the Arab Program for Human Rights Activists. The attack reached a head during a raid on several international NGOs last December, with security forces searching for documents proving their alleged role in funding protests in Tahrir Square, spreading chaos and inciting violence in several incidents throughout the year.

The raid signaled a shift toward a more aggressive approach in dealing with civil society in Egypt, and resulted in the referral of several employees from these organizations to criminal prosecution in a trial that is ongoing to this day.

With the election of a new parliament, NGOs continued to fight for the adoption of a new law that would put an end to state repression of these organizations. Gains made with the parliament, with a draft law discussed and scheduled for voting, were lost when a court ordered the elected body’s dissolution.

With the election of President Mohamed Morsi, NGOs hoped that the president’s promises would be fulfilled, and that he would break from an inherited restrictive legacy, which includes the notorious NGO law. The first 60 days of his presidency would prove otherwise. Security forces have continued to violently disperse protests, watched over the displacement of Christians, and detained dozens of civilians following bloody clashes between citizens and the police.

Lastly, the Munufiya governor issued a decree disbanding a local NGO, al-Nahda al-Refeya, after it filed a lawsuit calling for the dissolution of the current constituent assembly. The decree stated that the NGO, which has been working in the governance and government transparency field since 2007, was disbanded for receiving foreign funding without prior approval. It is widely believed that the NGO was dissolved because of its vocal criticism of the Muslim Brotherhood.

Actions against NGOs together with a proposed new bill do not bode well for civil society’s future in Egypt. The Ministry of Social Affairs’ latest draft, if passed by the next parliament, would place even further restrictions on foreign funding. While the government alleges that the bill will relieve restrictions, civil society groups in Egypt feel it will give state security more power over NGO activity.

The state must change its views and restrictive tendencies towards civil society. This will not happen until authorities begin to view civil society groups as potential partners, rather than enemies. If the government wishes to offer a gesture of good faith, the first step it could take is to acknowledge their recommendations and adopt the proposed NGO law. In order to validate any ongoing dialogue, the government needs to enact policies that will benefit civil society’s core value: the promotion of human rights.

Mostafa Shaat is the Project Coordinator at the Cairo Institute for Human Rights Studies (CIHRS).