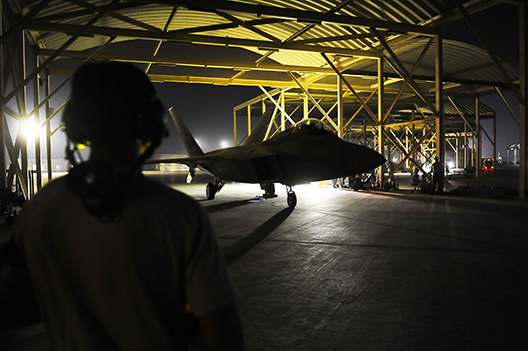 The Islamic State (ISIS) threat to Turkey has increased considerably in recent months, following an increase in rocket attacks on the Turkish city of Kilis and the deliberate targeting of Turkish tanks and artillery near Karkamış. The rise of the Islamic State threat prompted Turkish Foreign Minister, Mevlüt Çavuşoğlu, to underscore the need to clear ISIS from the last strip of territory it controls along the Turkish border, dubbed the Manbij Pocket. The United States and Turkey, however, differ over how to achieve this goal. This disagreement stems from a divergence of opinion on strategy and the composition of the local ground force to battle ISIS in this area.

Turkey favors a policy using indigenous Arab forces, while the United States has worked most closely with the PYD’s militia, the YPG. To better understand present military action in Syria, one must first grasp the operational concepts underpinning the current US military strategy. These operations help to frame why the United States is working most closely with the Kurdish majority Democratic Union Party (PYD), despite tensions this partnership has caused with NATO ally Turkey. It also helps elucidate why any action to force ISIS from the Manbij pocket using non-YPG fighters is extremely difficult, absent a change in Turkey’s calculus, or commitment to escalate its own military involvement in northern Syria.

The Afghan and Iraq Model: The Origins of the Anti-ISIS Campaign

The United States began airstrikes against ISIS following the beheading of American journalist Steven Sotloff, the group’s takeover of the Iraqi city of Mosul, and subsequent military victories near Erbil and outside of Samarra. In these combat operations, the United States appears to be using military tactics first used during Operation Enduring Freedom in Afghanistan in 2001/2002 and Operation Viking Hammer, the northern front in the American-led war against Saddam Hussein’s Iraq in 2003.

These past operations witnessed a heavy use of US Special Operations Forces (SOFs), working closely with indigenous militias dependent on American air power to take and hold territory from the enemy. Each SOF team deployed in Afghanistan and northern Iraq included US Air Force combat controllers, tasked with relaying targeting information to American aircraft, stacked over the battle field at different altitudes to deliver various precision guided munitions. Together, this new concept defeated the better-armed Iraqi and Taliban enemies divisions, proving the value of SOFs and airpower for modern warfare.

In Syria, the United States is applying the same concept, using SOFs deployed alongside the YPG and aircraft based out of Turkey and in the Persian Gulf.  Together, both the Peshmerga and the YPG managed to take territory from ISIS, while American bombing has disrupted the group’s freedom of movement.

Troubles in the Pocket

This strategy works well in Kurdish-controlled areas, but the situation on the ground in the Manbij pocket rules out the insertion of US ground forces because of hostility from groups active in the area. This was evidenced by associated troubles with the Train and Equip (T&E) program, which ended when Syria’s Al Qaeda affiliate, Jabhat al-Nusra, attacked the American-trained forces (Division 30) after fighters entered Syria. While Division 30 fighters did stand and fight and, in an overlooked success, were able to call in US airstrikes, Nusra’s seizing of weapons undermined political support for the mission.

(Source: Syria Live Map with addition of Manbij pocket and territory along the Euprhates. Click to enlarge)

Nusra has since left the area of its own volition, but its ally, Ahrar al-Sham remains as the dominant force in the area. Ahrar and Turkey have close relations. Moreover, Ahrar is hostile to the YPG (and vice versa), undermining efforts to broker ceasefires in the pocket to facilitate combined operations to combat ISIS. More broadly, the presence of hardline groups is also one of the reasons for the problems with also impaired the Train and Equip program. Division 30’s mission also differed too greatly from that of the rest of the Arab majority rebel groups active in the area, with the US pushing the group to focus only on ISIS, while the majority of the rebels view the regime as a larger threat. This divergence undermined the mission from the outset – and has hurt the credibility of US-trained forces inside Syria.

Moving Forward in the Pocket: Aligning US Goals with a Ground Force

The next phase of US combat operations in Syria remains dependent on  American goals coinciding with those of the Peshmerga and the YPG. In the case of the latter, this poses two problems for operations in the Manbij pocket. The YPG has a steadfast interest in defeating ISIS in the towns of Manbij and Jarablus, in order to move further west to link up with the isolated Kurdish territory of Efrin. Turkey, however, has publicly stated that any such move would violate a “red line,” and therefore prompt a military response to prevent the YPG from consolidating control over almost all of its longest land border. These two interrelated problems pose a far broader issue for the next phase of the war against ISIS in Syria.

The United States has prioritized the severing of ISIS’ cross-border supply lines between Iraq and Syria. In northern Syria, the YPG has severed one such line through Shaddadi, while a US and Jordanian-backed Arab group, the New Syrian Army, has taken control over the highway connecting Baghdad with Damascus. ISIS, however, still retains control over the Euphrates River Valley – a historically difficult area for the US military to take and hold on the Iraqi side of the border. At the same time, the United States is eager to force ISIS from Raqqa. This operation depends on the closing of the pocket, depriving ISIS of the ability to flank friendly forces from the east.

Future operations near Raqqa and along the Syrian-Iraqi border could exploit Arab SOFs, operating in much the same way as their US counterparts. These forces could help co-opt greater Arab tribal involvement, allowing the YPG to act as a blocking force north of Raqqa and from their strongholds in Jazira. Arab SOFs could also identify groups with like-minded goals to that of the United States, and therefore magnify the benefits of US airpower.

The same cannot be said for the Manbij Pocket. The Arab-dominated groups in the area have a fractured command structure and are not united – and therefore have struggled to coordinate offensives on the battlefield. Furthermore, the United States cannot conceivably work with the most dominant group in the area, Ahrar al-Sham, because of its links to Nusra. The Syrian regime and its Russian allies have also used airpower to disrupt rebel operations in other areas in Syria, forcing groups to move manpower to defend other fronts in Idlib.

To enable offensive operations in the pocket, the United States and Turkey have an immediate incentive to support the reaffirmation of the “cessation of hostilities,” in order to limit regime air operations throughout the country.  This would allow for the groups in the pocket to focus on ISIS, rather than shuffling man and material to defend other fronts with the regime. To address the command and control issue, Turkey could deploy its own SOFs with allied rebel groups. Turkish SOFs could then pass data to the coalition to aid with the air campaign in the area. Turkish SOFs are, in general, held in high regard by their American counterparts and the two militaries have worked together to target the PKK, using drones that share data in a US-Turkish manned intelligence fusion cell in Ankara.

These forces, in turn, could be augmented through a partial revitalization of the T&E program, designed to train a small number of fighters to pass coordinates to US targeting teams. This program would mirror that of US efforts with the YPG, and therefore help make the non-Kurdish forces in the pocket more effective.

This approach requires greater allied SOF presence in the Manbij Pocket, together with a concerted push to prevent the outbreak of fighting between the YPG and Turkish-backed rebels in the area. Tensions between these two groups hinders the campaign against ISIS, and would thus have to be addressed as part of the effort to take Raqqa. Turkey and the United States could agree on a joint list of groups to support, but Turkey should also consider moving beyond only arming these groups, and explore embedding SOFs with them. The YPG and hostile Arab groups, in this scenario, would not have to actually join with one another, but simply maintain a very cold ceasefire. In a longer term concession, the Arab groups could grant the YPG freedom of movement to Efrin through a dedicated corridor, giving the YPG less incentive to fight to take territory.

The dynamics in the Manbij pocket preclude the type of military campaign the United States is currently waging in coordination with the YPG and the Peshmerga. Turkey could play a greater role moving forward, but would have to be prepared to use ground forces to realize its interests in Syria. Absent this type of change, the events in Syria will eventually require the closing of the pocket. The YPG is prepared to do it, and thus could be counted upon to fight ISIS. There is still room for compromise and joint action, but the options are narrowing – and Turkey may have to escalate to realize its military goals.

Image: An F-22A Raptor in the US Central Command area of responsibility prepares for strike operations against ISIS targets in Syria, Sept. 23, 2014. (US Air Force photo by Tech. Sgt. Russ Scalf)