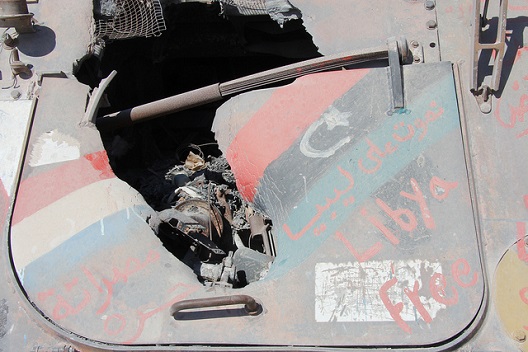 With reports emerging on a possible airstrike carried out by the UAE and Egypt on Islamist positions inside the Libyan border, the story remains murky. The United States has issued contradictory statements in response to the reports, and it remains unclear whether or not the airstrikes were carried out without its prior knowledge. Egypt, meanwhile, has repeatedly denied the news of military intervention in Libya, with Foreign Minister Sameh Shoukry announcing an initiative, alongside his Libyan counterpart, Mohamed Abdel Aziz, which aims to train Libya’s police and army, as well as disarm Libya’s militias. No details were given the plan. MENASource editor, Tarek Radwan spoke with the Hariri Center’s Senior Fellow, Amy Hawthorne, on the impact reports of airstrikes could have on US-Egypt relations.

What is your reaction to reports of this attack on Islamists in Libya?

To mention two interesting things about this incident:

First, the fact that two very close military allies and longtime security partners of the United States—Egypt and the United Arab Emirates—reportedly carried out these airstrikes without the concurrence of the United States, is yet a further sign of political tensions over divergent threat perceptions, and one that has now spilled over into the realm of direct military action in Libya.

Second, from Egypt’s point of view, Egypt has a genuine security problem emanating from Libya that is getting more acute and is very, very difficult to address because of the long and porous border.  Cairo is not fully sure how deal with the instability and weapons coming from Libya. The regime also has a political problem, which is that it doesn’t want to see Islamist movements on the ascent next door in Libya, and so sensing a vacuum in the international community on the first problem and a lack of consensus on the second, the government in Cairo apparently decided to take matters into its own hands to secure its own national interests, not to wait for coordination or help from the West.
We haven’t seen anything like this from Egypt in a while, and it’s very, very interesting. Will it be the first of many airstrikes? We don’t know.

What is the impact on the US-Egypt relationship?

This episode is yet another moment in post-Mubarak Egypt in the past year especially, that leads to the growing estrangement between the two countries that are bound closely together, basically through shared security interests and some degree of strategic cooperation, but where increasingly Egypt places less value and need on its relations with the US, is more willing to act on its own regardless of US preferences.   It is yet another example of how $40 billion of US military aid over the past 35 years has generated many benefits for both sides, but has not created a solid strategic partnership.

To find out more about how impact the airstrikes will have domestically in Libya, as well as their effect on Libya-Gulf relations, click here to listen to more expert opinions from the Atlantic Council’s Senior Fellow on Libya, Karim Mezran and Senior Fellow on Middle East Security, Bilal Saab.

Image: Remains of a tank outside of Misrata with faded slogans, the Arabic of which says, "We would die for Libya," August 2012. (Photo: Flickr/joepyrek)