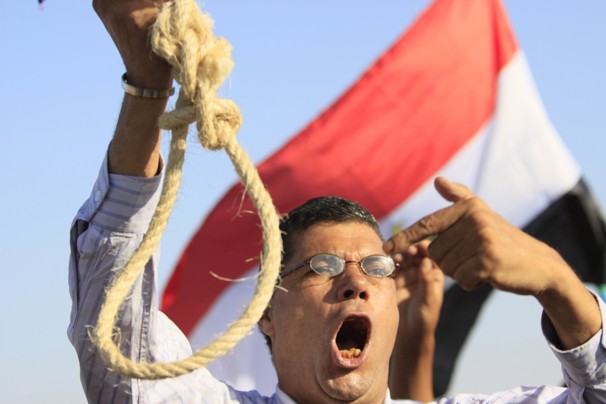 In anticipation of a violent reaction to former President Hosni Mubarak’s sentencing and verdict expected on June 2, Egyptian officials are planning to deploy 160 tanks and 20,000 police officers to maintain order in Cairo. The trial has high stakes not just for Mubarak and his fellow defendants – Former Interior Minister Habib al-Adly and six security officials, as well as his two sons Alaa and Gamal, and businessman Hussein Salem are also standing trial on various charges of corruption and complicity in the killing of protesters – but for the presidential election and, beyond it, the prospects for economy recovery.

Egyptian stocks flatlined on May 30 after it was announced that Mubarak’s two sons are implicated in a second corruption case. Alaa and Gamal Mubarak and the two chief executives of investment bank EFG-Hermes are to stand trial alongside five others for corrupt stock exchange dealings. The charges are another unwelcome shock to foreign investors already hesitate to take a risk on Egypt’s ailing economy.  Earlier in May, the average yield on 182-day Egyptian treasury bills had already reached its highest rate in a decade and the Egyptian pound hit a seven-year low over concerns of instability related to the upcoming trial and presidential election.

Any violence related to the trial could benefit presidential candidate Ahmed Shafik, who is running on a platform of restoring order and security against the Brotherhood’s candidate, Mohamed Morsi. But as a symbol of the Mubarak regime, his image could also suffer if an acquittal – however unlikely – sparks anger against the ruling military establishment, at a time when liberal and revolutionary groups are already calling for a nationwide electoral boycott of the second round of voting on June 16-17.

Mubarak is the first leader brought down by the Arab awakening to be brought to court by his own people. Libya’s Muammar Qaddafi was a casualty of mob justice, Tunisia’s former president Zine El Abidine Ben Ali is being tried in absentia, and former Yemeni President Ali Abdullah Saleh can take his pick of safe havens in Ethiopoia, the UAE or Russia. But scope of Mubarak’s trial may be too limited to set the precedent for accountability that Egyptians are looking for. The charges related to human rights abuses cover only a six-day period from the start of the revolt on Jan. 25, 2011, a small slice of Mubarak’s 30-year legacy of repression.

The prosecution has requested the death penalty for Mubarak, a punishment usually carried out by hanging in Egypt, but if Mubarak is convicted he could get off with as little as a three-year prison sentence. When the case began last August, the prosecution failed to produce sufficient evidence for a conviction, and the defense lawyers have argued all along that Mubarak and former Interior Minister Habib al-Adly are innocent of all charges.

Mubarak’s defense team plans to appeal a potential guilty verdict on June 2, and it is entirely possible that the ruling will be postponed yet again, perhaps for years. It is unlikely that Mubarak would be given the death penalty given his advanced age and poor health, and an acquittal or light sentence would likely provoke a violent backlash by protesters impatient for a verdict that has taken the presiding judge three months to deliberate since the closing of the case on February 22. Whatever the verdict, it will be issued against a volatile backdrop of heightened polarization as the second round of the election approaches. As Ahmed Shafik’s pro-military constituency prepares to face off against  the Muslim Brotherhood’s Mohamed Morsi, Egypt’s liberals, leftists, and seculars are caught between candidates representing two polar and equally unpalatable extremes. Forced to pick their poison, many voters would rather boycott the election, and an unsatisfactory verdict in the trial of the century could galvanize protesters seeking to challenge the legitimacy of the electoral process.

Mara Revkin is the editor of EgyptSource. She can be reached at [email protected]