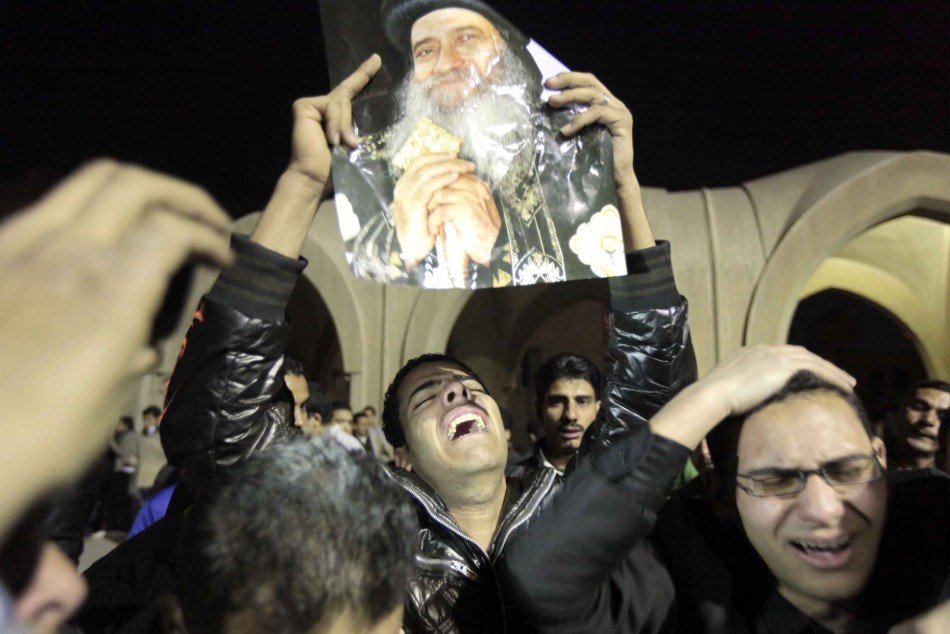 As liberal and minority groups voice concerns about the composition of an Islamist-dominated constituent assembly that will draft Egypt’s next constitution, hardly a sermon goes by at Coptic churches without references to rising fears among Egypt’s ten million Christians over the changes sweeping the country. The death of Pope Shenouda III, patriarch of the Coptic Orthodox Church, on March 17 has only heightened anxieties over the rights and status of religious minorities in the post-Mubarak Egypt.

The departure of a spirtual leader who represented the Coptic community for the past forty years marks the end of an era and the dawn of uncertainty. During Shenouda’s lifetime, Egypt witnessed rising sectarianism that resulted in the marginalization of Coptic Christians and occassional violence claiming lives and destroying property. In spite of Shenouda’s political stance, viewed as loyal to the Mubarak regime, many Copts saw the Pope as a safe harbor in a storm.

Coptic fears currently revolve around the rising influence of Islamists who are seeking to dominate the political process and dictate the future legal framework after gaining control of parliament. Despite concerns that Islamists may seek to strengthen the role of Islamic law in the new constitution, the Muslim Brotherhood and its Freedom and Justice Party have repeatedly reassured Copts and supported inter-religious dialogue between Muslim and Christian leaders.

One of Pope Shenouda’s last gestures was to engage in this dialogue process. During his last visit to the United States for medical treatment, Pope Shenouda was informed that his illness was terminal. Shenouda made arrangements to return to Egypt but he did not wait until his arrival to arrange a meeting with the Muslim Brotherhood’s Supreme Guide Mohamed Badie — a meeting Badie had requested a year earlier, but which the Pope had been unwilling to accept until his final days.

The two men met on February 7, forty days before the Pope’s death. Their conversation consisted mostly of pleasantries and did not broach controversial political topics in light of Shenouda’s deterioriating health. One might attribute the Pope’s eagerness to set a date for the long-delayed meeting to his fear of leaving the Coptic community leaderless without having built bridges of dialogue with the group that is expected to dominate Egypt’s political scene for the foreseeable future.

The meeting sent a message to Christians that they will need to engage in realpolitik and work with the Islamist majority to prevent further marginalization. But Coptic fears grow day by day as the Islamists’ promises to support tolerance and inclusiveness are not accompanied by any solid guarantees.

The Supreme Guide’s meeting with the Pope coincided with meetings he held with the heads of other Coptic Christian groups, including leaders of the Anglican and the Catholic communities. Even before Christian-backed secular political forces were soundly defeated in parliamentary elections that delivered more than 70 percent of parliamentary seats to the Muslim Brotherhood and the Salafis, Christian leaders seemed to accept an Islamist victory as a fait accomplit. As it became clear to the Church that the secular parties on which it placed its bets were not the winning horses, Christian leaders began reluctantly negotiating with the Islamist parties that would control the constitutional drafting process through its majority in the parliament.

At a time when Copts are negotiating for their rights from a position of unprecedented weakness, the Christian community is adrift without leadership. In the same month that the High Presidential Election Commission opened the door for nominations for the presidential election, parallel procedures are underway to elect a new leader of the Coptic Church.

Pope Shenouda did not have to deal directly with the Muslim Brotherhood during Mubarak’s rule, using its status as a banned group to justify his refusal to meet with Islamists. But the new pope will have to deal with these political forces, in addition to a new generation of politically conscious Coptic Christian activists who led anti-government protests and spoke out against hate crimes and sectarian violence during the uprising. The strength of Pope Shenouda’s impact and popularity once limited the influence of activists who criticized the Church’s alignment with the regime, but without a strong leader the strength of this grassroots movement is likely to increase beyond the confines of the official religious establishment. In addition, the regime-friendly policies that Copts tolerated under Pope Shenouda may no longer be tenable under a new leader.

The huge crowds of Copts surrounding the Cathedral of St. Mark for three consecutive days for a farewell look at the departing Pope also sends the message that Christians represent a political constituency too vocal and significant to be sidelined. Their role and influence could also increase with the emergence of a civil political leader capable of rallying Copts around the principle of a civil state rather than a religious one.