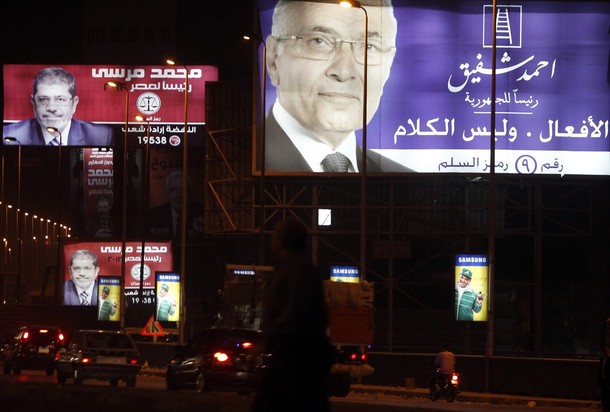 Political polarization in Egypt has reached new and dangerous heights, after the rejection of all the appeals presented to the Supreme Presidential Electoral Commission challenging the first round victory of the Muslim Brotherhood’s candidate Mohamed Morsi and Mubarak’s former Prime Minister Ahmed Shafik.  Due to the elimination of the two candidates most closely associated with the revolution – the Nasserist Hamdeen Sabbahi and the moderate Islamist Abdel Moneim Aboul Fotouh — there are a range of scenarios for how the  Revolutionary bloc will vote (or perhaps abstain) from the second round faced with a choice between the two dominant political forces: the ruling establishment and remnants of the former regime (represented by Shafik) and the Islamists (represented by Morsi).

The run-off competition Morsi between Morsi and Shafik presents non-Islamists and revolutionary voters with a stark choice. Morsi and Shafik will enter the run-off round with no guarantee of winning more than their share of the vote in the first round: 25 and 24 percent, respectively. Therefore, both candidates will be campaigning intensively for the support of additional constituencies to bolster their support heading into the final round.  The two finalists will each try to negotiate other political forces to gain the support of voting blocs who supported the losing candidates Hamdeen Sabbahi, Amr Moussa and Abdel Moneim Aboul Fotouh in the first round. This high-stakes horse-trading   to win the support of voters who backed losing candidates in the first round has already begun.
Sabbahi’s voting bloc (20.6 percent) is viewed as the keystone to victory in this fiercely competitive and polarizing race, since the voting blocs of the two losing Islamist candidates  (Aboul Fotouh (17.6 percent) and Mohamed Selim al-Awa (1 percent) will throw their support behind Morsi, while Amr Moussa’s bloc (11 percent) is expected to vote overwhelmingly for Shafik.
The destiny of both candidates will be largely determined by their relative success in brokering political deals with Sabbahi, Morsi will take the slogan of "The revolution versus the old regime’s remnants" and Shafik will campaign under the slogan, "the civil state versus the theocratic state.”
With the losing candidates’ supporters now up for grabs, what are the possible alliance scenarios? A few factors are constant and can be predicted with reasonable certainty, but the reconfiguration of the electoral map is by no means certain.

Aboul Fotouh’s voting bloc leans mostly towards the Brotherhood candidate Mohamed Morsi, despite the disagreements between Aboul Fotouh and The Muslim Brotherhood after he quit the group last year to run for the presidency, at a time when the Brotherhood had banned its members from competing in the election.
Although Aboul Fotouh had succeeded in winning the endorsements of a few liberals and some Christian groups,  the vast majority of his supporters were Islamists and anti- regime voters. The main parties supporting Aboul Fotouh were The Egyptian Current Party, founded by former Brotherhood members after the revolution, the moderate Islamist Wasat Party, the Salafi Nour Party, and the  Salafi Dawa group.
Aboul Fotouh’s moderate Islamist constituency and support from anti-regime voters was reflected in his campaign and media discourse. Aboul Fotouh’s supporters are much more likely to vote for another Islamist, Morsi, than one of the former regime members they have so thoroughly repudiated.
Aboul Fotouh himself has already taken steps to persuade his supporters to vote for Morsi, and if most of his voting bloc (17.5 percent) back Morsi in the run-off, Morsi’s would benefit from a significant bump in support.
The small percentage (around 2.6 percent) of voters who are divided  among revolutionary, liberal, and leftist groups, will probably lean toward boycotting. And if we ad the voting bloc of Mohamed Selim al-Awa (The third Islamist candidate, with around 1 percent of the vote) Morsi will go into the second round with a guaranteed 41 percent of the vote.

Shafik can count on the votes of   a majority of Amr Moussa’s supporters (11 percent of the first round vote), since the two candidates both represent the former regime and possess the same network of local and regional interests and grassroots networks of support.
Similarities between the two candidates’ campaign platforms and discourse – emphasizing "stability” and “reform from within” will encourage Moussa voters (11 percent in the first round) to throw their weight behind Shafik. Shafik can expect to win around 9 percent of Moussa’s supporters, including Copts. The remaining 2 percent of Moussa’s base may be reluctant to support Shafik, because these voters chose Moussa for his opposition to Mubarak’s policies and his strong stand against Israel.
Shafik is also expected to win the support of the estimated 10 percent of young Coptic Christian voters who supported Sabbahi in the first round.
It is believed that 75 percent of Coptic voters (representing 8-10 percent of the electorate) already voted for Shafik in the first round; another 15 percent voted for Moussa; and another 10 percent (primarily young Copts) voted for Sabbahi.
Assuming strong support from Coptic voters and Moussa’s supporters, Shafik is heading into the second round with a guaranteed 35 percent of the vote.
To summarize the definite voting blocs:

In the days since the first round, Aboul Fotouh has tried to play an intermediary role between the Muslim Brotherhood and Sabbahi, inviting the latter to participate in a meeting to form a national front against the former regime remnants. However, Sabbahi declined to attend.
It would be premature to assume that Sabbahi’s rejection of the invitation indicates his refusal to negotiate with the Brotherhood.  It is more likely an indication of Sabbahi’s desire to fully consider and weigh the decision before entering into talks with the Islamist bloc.
Sabbahi’s Karama (Dignity) Party already has a long history of cooperation with the Brotherhood dating back to the 2005 parliamentary elections, and continuing through the 2011 elections under the banner of the Democratic Alliance.
Morsi hopes to gain the support of Sabbahi and his voting bloc (20.6 percent in the first round) or even half of it, which would virtually guarantee his victory over Shafik.

Shafik will likely try to make a deal with Sabbahi to win his coveted voting bloc (20.6 percent of first round voters), which would theoretically guarantee Shafik’s victory.
Shafik has already offered Sabbahi the vice presidency and his choice of four ministers. He is also alleged to have offered to relinquish the presidency to Sabbahi after two years.
The generosity of this offer can be attributed to Shafik’s desperate situation, heading it to the second round with an estimated 35 percent of the vote (based on the predictable voting blocs assumed above) compared to Morsi’s 41 percent.
Shafi’s assertion that he does not want to reproduce the old regime or his promise to reverse the counter-revolution have not convinced liberal and revolutionary voters.
Shafik  has little chance of victory without an alliance with Sabbahi,  who offers not only a significant voting bloc but also a reputation for integrity that Shafik sorely needs to burnish his own shady credentials. However, such an alliance would have high political costs for Sabbahi, and would undermine his political legitimacy as a symbol of the revolution.

Under this third scenario, Sabbahi will yield to the demands of many of his supporters – especially young activists resentful of the Brotherhood’s inconsistent support for the revolution – by endorsing a boycott of the second round.
A decision by Sabbahi to endorse a boycott rather than aligning with Morsi or Shafik would not necessarily be supported by all of his voting bloc, a diverse grouping of nationalists, leftists, liberals and revolutionaries, and therefore components of the bloc might individually side with Morsi to preempt a resurrection of the former regime.

Shafik’s best hope under any of these three scenarios is to leverage his natural base of support in the bureaucratic state apparatus and take advantage of his financial and media connections. His main objective will be to raise the overall rate of participate in the run-off (only 46.6 percent of Egyptians voted in the first round) in order to in the mitigate the weight of Islamists, who appear to have voted at higher rates than non-Islamist in the first round.
Morsi’s strategy will be to maximize the Salafi vote and persuade Salafis who voted for Aboul Fotouh in the first round, or abstained from voting entirely in protest of Hazem Saleh Abu Ismail’s controversial disqualification by the electoral commission.
It is expected that the Muslim Brotherhood will leverage the occasion of Hosni Mubarak’s trial on June 2 to mobilize support and strengthen its revolutionary credentials.  Whatever the outcome of the trial – an acquittal would be condemned and a conviction would be criticized for its long delay – it will inevitably galvanize revolutionary elements against the former regime remnants, and the Brotherhood will invest it strength in portraying Shafik as the heir to Mubarak’s authoritarian legacy.
Mustafa El-Labbad is the director of the al-Sharq Center for Regional and Strategic Studies in Cairo.
Fouad El-Saeed is a political analyst at the al-Sharq Center for Regional and Strategic Studies in Cairo.
Photo Credit: Reuters