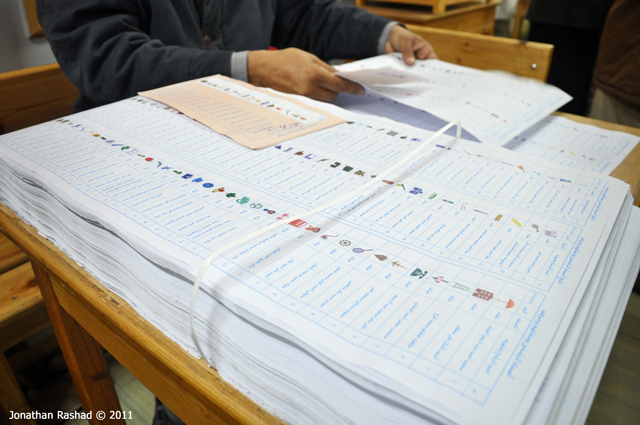 With Parliamentary elections slated for April, and President Mohamed Morsi adamantly stating that they will go on as expected, a few of Egypt’s political parties have begun to prepare for the ballot boxes.  With no date set as of yet, Morsi has until February 25 to announce the date, as per the constitution.

According to the new constitution, candidates must hold a certificate of basic education, and be 25 years old or older at the time of candidacy. The constitution adds, however, that other
requirements of candidacy, the provisions for election and the fairly representative division of constituencies, shall be defined by law. With a five year term for parliamentary membership, once the new House of Representatives elected, legislative power will then be transferred from the Shura Council to the parliament.

While several coalitions have already emerged, talks between parties continue, with some waiting for the ratification of the electoral law to reveal their final plans.

The Shura Council approved amendments to Law 38 (1972) on the People’s Assembly and to Law 73 (1956) on the exercise of political rights in January and referred them to the Supreme  Constitutional Court (SCC). The SCC ruled that several articles of the electoral law had to be amended in order for it to be constitutional. The SCC ruled that as many as 10 articles were unconstitutional, with the law in violation of Articles 55, 229, 113, 232, and 238 of the constitution. The full details of these articles can be found here.

Days after the court ruling, the Shura Council announced its acceptance of the court’s changes and passed the law, with several amendments. However, the SCC’s official stance remains that the Shura Council has not adopted all of the changes that were requested. A particular point of contention for the courts is the uneven distribution of seats by governorate.

According to the law, elections will be held using a closed party-based list system, with two thirds of the seats contested by party members and one third set aside for independent candidates.

Plans:
While statements that the Freedom and Justice Party (FJP) will be running on an individual ticket, except in Upper Egypt, have emerged, Dr. Essam al-Erian, the party head earlier stated that a final decision would not be made until the electoral law is ratified.

The FJP also announced that it will exclude 80% of its former parliamentarians in upcoming elections. FJP member Helmy al-Gazzar stated that candidates would be nominated based on their experience.

Former MP and FJP member Azza al-Garf stated that the FJP already has a parliamentary agenda, in which they prioritize security, economy, health, transport and communications, adding that the party is organizing workshops to prepare FJP female members to participate in upcoming elections.

The FJP expects to win a majority of the seats. Ibrahim Abu Auf, a leading member of the FJP predicted a 55% win for his party, adding that the number could increase if they were to form coalitions with other parties.

Last year:
In last year’s parliamentary elections, the Freedom and Justice Party won 47% of the seats, with 126 seats won via the party list system and 109 won as independents.

However, while the NSF has indicated its intention to field one list, it remains unclear whether the coalition will actually contest any seats in the upcoming elections at all. The NSF stated in January that it would boycott elections unless its demands for the formation of a national salvation government and a legislative committee tasked with amending the newly adopted constitution were met.

The NSF has also previously listed several conditions to ensure free and fair elections including full judicial supervision, holding the elections over two days, ensuring stamped ballot papers, allowing NGO-monitoring, as well as ensuring a minimum of one female candidate among every three candidates.

Last year:
The leading parties in the NSF were created after last year’s parliamentary elections were held, however some of its members, including the Free Egyptians Party, Egyptian Social Democratic Party, the Freedom Egypt Party and the Democratic Front Party, ran as part of the Egyptian Bloc coalition. They won 7% of the seats, 31 via the party list system and 3 as independents. The Wafd Party ran alone last year and won 8% of the seats, and as a result of its previous success, its party members are pushing to run in the election alone.

Other parties within the NSF, such as the Socialist Popular Alliance Party ran under the Revolution Continues bloc, and earned 2% of the seats.

Plans:
Like the Freedom and Justice Party, the Nour Party announced its intention to run on an individual ticket in the upcoming elections. It has since stated that it will not seek out alliances, but in the event that alliances are considered, it would only be with Islamist parties.

Not only will the Nour Party be running on its own ballot, it has already started mobilizing for the elections and has reportedly prepared its list of candidates. The list includes party deputy head Sayed Mustafa, and party leaders, Ashraf Thabet, Ahmed Khalil, Talaat Marzouq and Salah Abdel Maboud. Official Nour Party spokesman, Nader Bakkar, is also on the list.

Speaking about the parliamentary elections, Nour Party head Younes Makhyoun said, “Through the incoming assembly, we will work on amending all legislation that conflicts with Islamic Law,”

The Nour Party, which has voiced its opposition for any kind of electoral quotas, is contesting 100% of the seats.

Last Year:
Last year al-Nour was part of a coalition bearing the party’s name, but included two other ultra-conservative parties – the Asala Party and the Construction and Development Party, the Jama’a Islamiya’s political arm. The coalition’s success came as a surprising, winning 23% of the seats, 93 via the lists system and 21 fielded as independents.

Plans:
The Free Homeland Coalition (al-Watan al-Hor) aims to be the largest Islamist coalition and consists of several Islamist political parties. Hazem Abu-Ismail’s Egyptian Nation (al-Umma) Party, aims to bring together al-Watan, an offshoot of the Nour Party and the Islamist New Labor Party, Reform (al-Islah) Party. They are also in talks with the Nour Party’s former alliance partners the the Construction and Development Party and the Asala Party.

The Jama’a Islamiya’s Construction and Development Party announced that it is in talks with Al Watan, Fadila and Asala Parties, and has no intention to ally with the Nour and Freedom and Justice Parties, saying that the FJP’s performance has “disappointed Islamists.”

Abu Ismail has stated that the coalition plans to contest all seats.

Last Year:
Like the NSF, the Free Homeland Coalition’s major parties were formed after last year’s parliamentary elections. In last year’s elections, the Construction and Development Party alone won 1% of the seats.

Plans:
A Centrist Coalition has been formed, bringing together several opposition parties, with both Islamist and secular parties included under one umbrella, the kind of which was not seen in the 2012 parliamentary elections.

The alliance expects to win a “significant” number of seats.

Plans:
After the court-ordered dissolution of parliament last year, a group of MPs from Mubarak’s now defunct National Democratic Party came together in the People’s Representatives Coalition, sometimes referred to as the Parliamentarians. While the coalition is not exclusively made up for NDP members, when it was first formed, at least 75% of its members were members of the party, while the rest were former parliamentary members and candidates.

The coalition has openly stated that it aims to “defend the civil nature of the state” and “reclaim” the People’s Assembly from Islamist parties.

While the new constitution prevents former NDP leaders from participating in political life for 10 years, according to Essam Shiha, a member of the Wafd Party, the stipulation can be applied to over 1,000 members, leaving more than 2 million eligible to run. Some ex-NDP members are also said to be running with the National Salvation Front.

The coalition has no intention to turn into a political party, but has stated that it is open to merging with other secular coalitions.

The group previously campaigned against the draft constitution, and plans to contest at least 100 seats in the upcoming parliament.