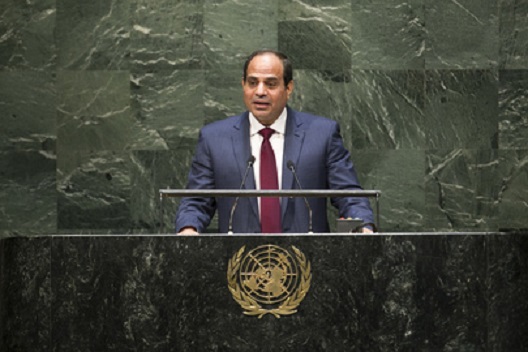 To cheers of “long live Egypt” from the audience and with angry protestors safely kept at bay on the street outside, Egypt’s new President Abdel Fattah al-Sisi delivered his inaugural speech on the world stage on Wednesday at the United Nations General Assembly (UNGA).  Sisi’s remarks aimed to persuade the international community of his legitimacy, in the wake of his ouster of elected president Mohamed Morsi last July and the vast crackdown on dissent that has followed. He also sought to display for a domestic audience Egypt’s clout on the global scene.  His speech covered four main themes—the “new” Egypt that is committed to democracy; the threat of terrorism he helped Egypt escape; his foreign policy; and Egypt’s move to a market economy.  Even by the grandiose standards of UNGA speeches, Sisi’s discourse veered from the dubious to the surreal.

Two years ago, then-president Morsi of the Muslim Brotherhood stood at the same podium at UNGA and declared, “I am the first Egyptian civilian president elected democratically and freely, following a great peaceful revolution hailed by the world.” Sisi did not try to claim such electoral legitimacy in his own UNGA address.  Instead, he portrayed himself a “son of Egypt,” following the will of the “great Egyptian people,” who “made history twice” by revolting first against “corruption and despotism” (former president Hosni Mubarak) and then against “a faction…that sought to put its interests before that of the people” (the Brotherhood). He asserted that after ‘two revolutions’ the Egyptian people are the sole source of Egypt’s domestic and international policies. Sisi proclaimed that “world is starting to grasp the truth” of what happened since Morsi’s overthrow, and went on to describe the “New Egypt” that is being built, a ‘civil democratic state’ that

This description clashes with the terrible political reality of the country.  Since last July, Egypt has experienced an unprecedented wave of repression targeting secular and Islamist opponents. Tens of thousands of Egyptians have been imprisoned, and many held without charge in overcrowded cells, with reports of widespread abuse and torture.  The security forces, according to Human Rights Watch, killed 904 protestors in one day.  Civil liberties and rights have been rolled back.  The courts preside over highly politicized trials lacking the most basic elements of due process.  A hyper-nationalist media demonizes alternative voices.  Just last week, Sisi amended the penal code to punish anyone accepting foreign funding that “harms the nation” with a sentence of life in prison or a fine of EGP 500,000. With the state stifling participation once again, and many Egyptians giving up on politics, the “New Egypt” is worse than the old one.

As expected, Sisi devoted much of his speech to the problem of terrorism—one of his main rhetorical themes at home, and conveniently, the focal point of this UNGA session.  While he never mentioned the Muslim Brotherhood or the Islamic State (also known as ISIS) by name, he implicitly cast them as one single terrorist phenomenon espousing “extremism and violence perpetuated in the name of religion” that “threatens the very existence of the state.”  He alluded to the Brotherhood as the “forces of extremism and darkness” that “relied on armed violence and terror to achieve its objectives.” He portrayed the group as being a terrorist entity from its inception. “Egypt has suffered from the scourge of terrorism since the 1920s,” he stated (the Brotherhood was founded in 1928).  He implied that the Brotherhood, which “concealed its poisonous viewpoints behind religion to reach power and [to] establish the Caliphate,” was ISIS’ progenitor.

Sisi stressed that Egypt has special credibility in fighting terrorism, due to its “strong state” and experience confronting violent extremism in the 1990s. Under Mubarak, Egypt succeeded in crushing a serious militant Islamist threat, but at an extremely high cost to human rights and the rule of law.  Indeed, that ruthless counterterrorism campaign worsened the unaccountability of Mubarak’s repressive interior ministry, and millions of Egyptian youth eventually rose up against its brutality in January 2011. Sisi predicted that Egypt would succeed in today’s struggle simply “by virtue of its national identity…and our longing for stability.”

Sisi described a “confident” Egypt poised to pursue a more robust foreign policy after several years of inward focus on domestic troubles. He cast Egypt as a “beacon of civilization…upholding the principles of law and freedom,” “aspiring to solve regional disputes,” and protecting the interests of African nations, and announced that Egypt would run for a seat on the UN Security Council in 2016-2017 (Egypt last sat on the Council in 1997). One of the speech’s discordant notes came when Sisi proposed that applying the “principles of equality of all citizens and respect for rule of law” would help solve some regional crises. Sisi, of course, has been criticized for doing the exact opposite at home. But when he spoke specifically about the crises in “brotherly” Libya, Syria, and Iraq, Sisi presented a more narrow security-oriented agenda, focused on protecting the territorial integrity of states and upholding the regional order against ‘serious danger’ (i.e. political Islam and violent militancy). “National security in other Arab nations is an integral part of Egypt’s own national security,” Sisi asserted, in a twist on the Gulf countries’ view that their security depends on Sisi’s success.

Improving Egypt’s troubled economy is one of Sisi’s top priorities, and wooing foreign investors has been high on the agenda of his New York visit. But his UNGA speech devoted just a brief paragraph to his economic plans. Sisi proclaimed, “Egypt’s ambitious development program is laying the foundations for a free market economy and attracting investments, including the Suez Canal, Egypt’s gift to the world.” Sisi’s economic policy, however, so far looks to be more about reinforcing the role of the state than moving Egypt toward a free market.

Since taking office, he has enacted some fiscal reforms (including the bold step of reducing fuel subsidies), but their aim is to relieve pressure on the budget and boost state revenues, not to liberalize the economy. Although Sisi has appointed several strong economic ministers, the cabinet has not yet followed through on promised investment reforms needed to help lure back foreign capital or taken other concrete reform steps. Sisi’s focus on mega-projects, most prominently the giant Suez Canal initiative, excites many Egyptians, but these initiatives lack transparency and rely heavily on the powerful military to implement. This approach of favoring military organizations and their affiliated companies with huge government contracts has raised concerns that the army’s large role in the economy may expand even further—the opposite of a free-market transformation.

Despite Sisi’s optimistic narrative, his doth-protest-too-much speech left the impression that the Egyptian government still feels uncertain about its international image following Morsi’s overthrow. Sisi went to great rhetorical lengths to convince his UN audience of his legitimacy and the positive “reality” of Egypt today. Yet the facts on the ground speak for themselves. Sadly for those Egyptians who want the international community to press for democracy, however, the “Egyptian exception” is alive and well. Egypt’s geostrategic location, Sisi’s promises to restore stability and crush terrorism, and the domestic backing for his strongman style are compelling many world leaders to accept him and even deal with him enthusiastically, regardless of how he governs.

Amy Hawthorne is a senior fellow at the Rafik Hariri Center for the Middle East at the Atlantic Council.