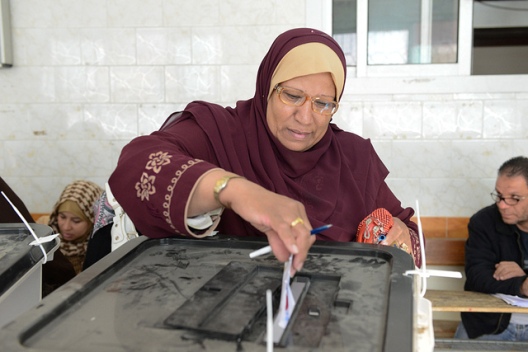 With the announcement of the results of Egypt’s 2014 constitutional referendum, the curtains were brought down on the first stage of the July 3 roadmap. According to the consensus on the roadmap, Egyptians should now be readying for parliamentary elections. However, all indicators point to a change in the agreed upon sequence of events, in which presidential elections will likely come next.

As a matter of principle, I have many concerns regarding amendments or changes to the roadmap. This is not due to personal convictions regarding staging parliamentary elections before electing a president, and neither is it due to inflexibility or persistence. Ultimately, the roadmap, which is the result of human decisions, is not immune to changes or amendments. Rather, there is the concern that if the door for change is opened once, it can’t be closed again.

As the roadmap moved forward, one of the most significant issues witnessing a lack of national consensus was also key to adhering to the predetermined progress of the roadmap. The members of the constituent assembly tasked with amending the constitution were unable to come to an understanding on the electoral system to be used in the next parliamentary elections, after which the entire process was to be sealed with free and fair presidential elections restoring Egypt’s democratic path.

In order to prove, at the very least, a commitment to the partners of the roadmap, the interim government must take steps to restore a healthy political life in Egypt. At the same time, it cannot be denied that Egyptians are in desperate need of a resolution regarding the presidency.  This is precisely what strengthens the argument among those who are calling for early presidential elections.

Going one step further, I can say that among the people who participated in the referendum on January 14 and 15, it is likely that the majority who voted ‘yes,’ were voting in favor of the roadmap first, before voting in favor of the constitution. They implicitly voted for early presidential elections, with many even voting implicitly for one specific candidate who has gained public support since July 3. Posters everywhere campaigning for a yes vote bearing General Abdel Fattah al-Sisi’s photo are a perfect example of the conflation of presidential elections and the referendum, and an indication of support for his candidacy among some.

It is worth noting that presidential elections, regardless of their specific timing, have been a major concern for many Egyptians since July 3. It is an overarching demand, preceding concerns over terrorist attacks, poor governmental performance or continuous chaos caused by the Muslim Brotherhood. This is probably in large part due to the persistence of the media in keeping any news of the presidential race, front and center. Talk of potential candidates, and which political parties have chosen to support them, has been widely seen in both private and state media, alongside exaggerated talk of magical solutions for all of Egypt’s problems if Sisi runs for president.

This conviction limits the competition over the presidential seat, theoretically, to four names. Three of them are from the military institutions: the current minister of defense, Colonel-General Abdel Fattah al- Sisi, former chief of staff under Mubarak, Lieutenant-General Sami Anan and former presidential candidate and Mubarak’s last premier, Colonel-General Ahmed Shafik. The fourth name on the list is Major General Murad Mowafy, the former head of Intelligence under Mubarak. When it comes to Sisi’s candidacy, this conviction is multiplied by specific factors. Whether due to statements by journalists or businessmen in the media, there is an entrenched belief that Sisi is the only candidate able to address Egypt’s economic and security needs.

The belief that the charisma, a firm hand, and an ability to make decisions are qualities enough for a leader, disregards key factors: a political and economic vision or a leader’s ability to present creative solutions to Egypt’s ongoing troubles. A diverse presidential team assisting him is also key within a democratic system that values institutionalism and reduces individualism.

On the contrary, expectations of Sisi have been raised to an unrealistic level, with people hoping for dramatic changes from day one of his possible presidency. This makes his likely decision to run for president akin to gambling.

Nader Bakkar is a co-founder of Egypt’s al-Nour Party and serves as a member of the party’s presidential and foreign affairs committees, as well as the chairman’s assistant for media affairs.