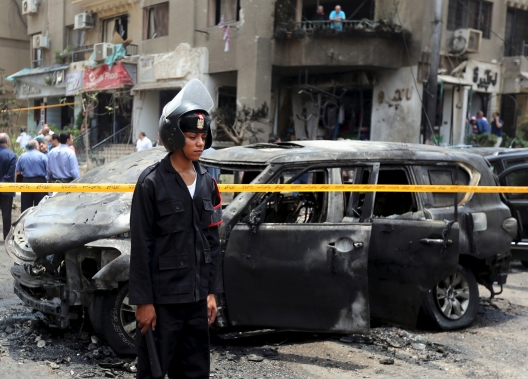 Egypt’s front pages on Tuesday mourned Prosecutor General Hisham Barakat, describing him as the “attorney of the people,” in the wake of his assassination on Monday. Appointed in the aftermath of the ouster of Mohamed Morsi, Barakat, 65, referred many high profile names to court. Included in this list are Morsi himself, as well as Muslim Brotherhood leaders, of which many have been sentenced to death or life in prison.

Egypt’s judiciary has been a point of domestic and international contention, with rights groups. Local rights group, the Cairo Institute for Human Rights Studies has called for “an end to the politicization of the judiciary,” which it says has been used by the regime to settle scores with opponents. Human Rights Watch, has also accused the judiciary of carrying out “flawed trials” against Morsi and other Islamists, as well as journalists and activists. In response to criticisms, Egypt’s foreign ministry has repeatedly stressed the independence of the judiciary and rejected international interference in domestic affairs.

With an estimated 1,500 death sentences issued over the past two years—each of the cases at various stages of appeal—twelve sentences were carried out in 2015. Among the twelve were six accused of belonging to an Islamic State affiliate group in North Sinai, the self-styled ‘Sinai State,’ previously known as Ansar Bayt al-Maqdis.

“It is wrong for the tyrants to jail our brothers,” said Abu Osama al-Masry, the leader of the North Sinai based group. The audio recording released in May, calling for increased attacks on judges, continued: “Poison their food… surveil them at home and in the street… destroy their homes with explosives if you can.” The call followed several significant incidents: the execution of the six alleged Sinai State members, the killing of three judges in a drive-by shooting carried out by the group a few days earlier, and a court decision sentencing Morsi to death.

The targeting of security forces and infrastructure around the country had spiked following Morsi’s ouster, particularly in North Sinai. The National Council for Human Rights reported in June, 700 officers and soldiers had been killed in the eighteen months following Morsi’s ouster. The attacks in North Sinai have been more sophisticated, causing much higher casualties than in Cairo, the Nile Delta and the Nile Valley, where smaller attacks are carried out by lesser-known groups. The killing of Barakat is a significant jump in the scale of attacks outside of the Sinai Peninsula. While the Sinai State praised the operation, it did not claim the attack on Barakat. Shortly after his death, it was attributed to the Giza Popular Resistance, a small group that has claimed several small-scale incidents in Cairo, among them a bomb that detonated outside a bank, and several bombs that were defused at Cairo Airport. The group has, however, since denied the claim that they were involved.

Zack Gold, Visiting Fellow at the Institute for National Security Studies, said that while Monday’s attack was “an escalation,” targeting the judicial branch is not a new trend. “There is a progression where different groups targeted the police as they were arresting them and now they have moved to the judiciary who are sentencing them.” He added the judiciary is seen as “part and parcel of regime repression.” Gold pointed to attacks and bombs planted at judges’ homes. “For at least a few months there has been an increase in attacks on judge and that should have been ringing alarm bells.”

“I am concerned about going to work,” said one judge in the aftermath of Barakat’s assassination. “Killing the prosecutor general has never happened before and it’s a dangerous sign for the country.” The judge, who spoke anonymously as he was not authorized to speak to the media, said he is not the only one of his colleagues who is concerned for their safety.

‘Sinai State’ released a video entitled “Extermination of judges” less than twelve hours before Barakat’s killing. The video included footage of carefully selected judges who have presided over high profile cases and handed down mass sentences. Among them was Ahmed Sabry Youssef, who handed Morsi and other Brotherhood leaders twenty years in prison for inciting violence. Hassan Farid is due to deliver his verdict in the retrial of Al Jazeera journalists at the end of July but is currently presiding over a case in which alleged ‘Sinai State’ members are on trial.

Judge Nagy Shehata who also appears in video is notorious for handing out mass sentences. In February he confirmed 183 death sentences for the killing of sixteen policemen in 2013. The case is likely to be referred to a higher court and go to retrial. A few days later he sentenced 230 to life in prison relating to clashes outside the cabinet building in 2011, which is also subject to an appeals process

Shehata was defiant in the face of the threat. “What will be will be. I am not afraid at all,” he said during a phone call to Sada El-Balad channel on Monday night. He said he has worked on terrorism cases “since 1998 in Assiut,” adding that he would take the train between Cairo and Assiut regularly with no incidents.

Gold said that members of the judiciary “need to consider their safety” despite his belief that attacks against them will not reach the same intensity as the campaign targeting the police. “Security targets are more plentiful,” said Gold, adding: “there is more direct anger at the police.” He noted that the judges featured in the ‘Sinai State’ video could have been “put out there to possibly inspire lone wolves.”

The judicial source said there are some among his colleagues who feel that some judgments passed down contribute to the “dislike” of the judiciary. “People deal with us like enemies and I didn’t know why, but everyday it becomes clearer.” He added that while many judges support these sentences there is a sense now that it is becoming increasingly dangerous to be a judge.

Raising this issue of mass sentencing is not easy, said the judge. “It is considered as a political discussion and they don’t like these sorts of discussions,” he said of his superiors. “It could only be accepted as a piece of written research into the issue,” adding there is not an official procedure to raise these concerns.

Security had been increased for individual judges presiding over high-profile cases and at judicial buildings in response to the threats made in May. Barakat was killed near his home in Heliopolis as he left for work, raising questions over the effectiveness of increased security. “We feel a lot of pressure now,” said the judge. “If they can get to him, they can get to anyone.”