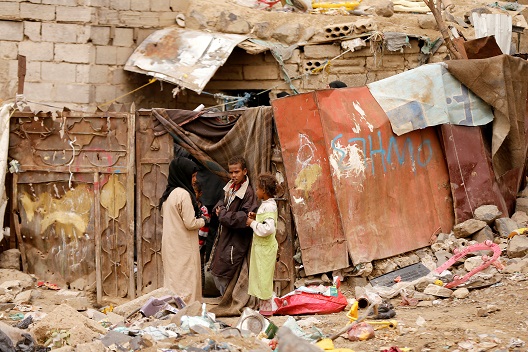 As the conflict in Yemen continues and the country’s humanitarian crisis deepens, UN Special Envoy for Yemen, Martin Griffiths, is attempting to negotiate a ceasefire for the port of Hodeida, a vital port for bringing aid and food into the famine-struck country. Earlier this month, the Saudi-led coalition began attacking the port city in response to missile attacks from the Iran-backed Houthi rebels. Taken against the recommendation of its allies such as the United States, this attack endangered the lives of many Yemenis who rely on the port for 70 percent of their food, fuel, and medicine imports. Aid organizations are struggling to deliver to the “world’s worst humanitarian crisis.” As Yemen’s war continues into its fourth year and the death toll reaches over ten thousand, Griffith’s negotiation may not only provide relief to the humanitarian crisis, but might also offer hope for a future settlement to end Yemen’s civil war.

The challenge of peacekeeping in Yemen originates from deep-rooted domestic political divides, further complicated by the intervention of regional actors. The civil war began in 2015 when the Houthis—a Zaidi Shia group—seized Yemen’s capital, Sana’a, and overthrew President Abdrabbo Mansour Hadi. Iran-allied Houthi militants advanced southward to the city of Aden. Saudi Arabia, in support of Hadi’s government, struck Yemen with airstrikes to remove the Houthi forces who they perceive as Iranian proxies. This complex web of actors, allies, and agendas prevented peacekeeping efforts from enduring.

Previous attempts at brokering peace have not held, with ceasefires broken in a matter of hours or days. The failed UN-backed ceasefires of 2015 and 2016 have set a precedent of distrust between the warring factions, as seen by the Saudi-led coalition’s refusal to renew the ceasefire in November 2016. From the beginning, the Saudi-led coalition showed a wariness to halt military activity against their unpredictable adversary. These short-lived ceasefires have shown that the Houthis continue to engage in warfare regardless of a truce, sparking the retaliation of the Saudis.

Unlike previous short-term truces, Griffiths is now attempting to negotiate arrangements for the port of Hodeida to be put under UN control. This poses a practical solution to the growing humanitarian crisis, as previous breaks in fighting have not allowed enough time for supplies to enter Yemen and reach the millions who need it, or deal with the structural challenges in a country reeling from years of war. A UN- controlled port could allow imports into Yemen with a long-term impact in a way we haven’t seen yet since the start of the war.

The stakes are high for Griffith’s negotiations. The Saudi-led offensive has enforced sea, land, and air blockades, slowing the flow of aid into the country. Meanwhile, the Houthis are impeding the distribution of aid within Yemen, so it is unable to reach many rural communities. Escalation on both sides has exacerbated Yemen’s humanitarian situation; Yemen now faces the largest cholera epidemic in the world, and 8.4 million people are a step away from famine.

Although Saudi Arabia’s Ambassador to Yemen, Mohammed al-Jaber, asserted that the port will remain open for relief supplies, Amnesty International accused the Saudi-coalition of delaying the unloading of aid and tightening its blockade. This shines a worrisome light on al-Jaber’s assertion, should Griffiths fail to negotiate for the port. Any escalation in Hodeida is likely to disrupt aid efforts, with possible Saudi defensive lines around the port acting as a de-facto blockade.

Since Griffiths began negotiating at the end of June, the Saudi-led offensive has paused and there have been no major developments. The Houthis indicated that they are willing to accept a ceasefire in Hodeida, but the Saudi-led coalition pushed the goalpost further, refusing to accept anything less than a full withdrawal of Houthi forces. If UN Special Envoy Martin Griffiths succeeds in placing Hodeida’s port under UN control, millions of Yemenis will benefit from much-needed aid. Saudi Arabia also stands to benefit from Griffith’s success, as it would improve the country’s international image, damaged by its military actions in Yemen, and potentially open channels for political negotiations with the Houthis that go beyond its military objectives in Hodeida.

Like many conflicts in the region, there is a lack of accountability for all parties in the war. International support for different parties makes peacekeeping a difficult task for Griffiths to do alone. In February this year, Russia vetoed a UN resolution to pressure Iran over Yemen missiles. The United States provides intelligence, military advice, and logistical support to the Saudi-led coalition in their offensive against the Houthis. As long as international superpowers aid and abet both sides, there are no strong deterrence mechanisms in play and no foreseeable consequences for violations of international or humanitarian law. Tangible pressure from these international powers, perhaps by stopping military and intelligence support, could help Griffiths negotiate a compromise from both sides.

After four years of fighting, the conflict in Yemen has faded into a ‘silent war,’ largely out of the international public consciousness. Although a UN-controlled port does not provide a political settlement, it could provide a reliable infrastructure to allow aid organizations to make an impact in alleviating suffering from the crisis. If Griffiths is able to place the port under UN control, it would offer a glimmer of hope for the Yemeni people and show the global community that there is still place for diplomacy in a war that desperately needs not to be forgotten. Without it, the war may continue indefinitely at great civilian cost.

Zara Jayant is an intern at the Middle East Security Initiative in the Brent Scowcroft Center for Strategy and Security center at the Atlantic Council.