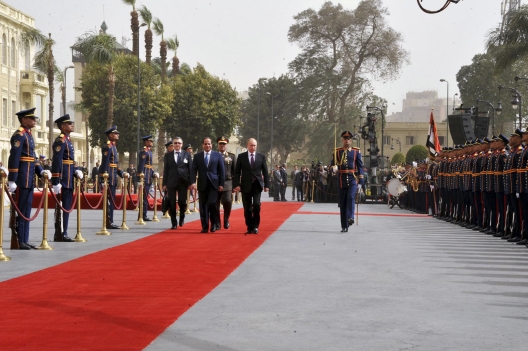 Russian President Vladimir Putin paid a widely publicized visit to Egypt from February 9 to 10.   The government-backed Egyptian press gushed over how well Russia (unlike America) treats the Egyptian government.  Some commentary in the Russian press proclaimed the visit to be another sign that Russia was gaining influence in the Middle East while America was losing it.  Yet despite these glowing accounts, what actually resulted from Putin’s visit to Cairo was far more modest.

The most dramatic development was the signing of an agreement by Putin and Egyptian President Abdel Fattah al-Sisi for Russia to build a nuclear power plant in Egypt.  Little was said, though, about how this project is to be funded.  Russia is going to want to be paid for this project, but it is doubtful that Egypt can do so.  Nor is it clear that any third party will be willing to provide funding.  Yet even if funding is found and the project somehow goes forward, it should be remembered that the Russian construction of a nuclear power plant for Iran often proved to be a source of contention between Moscow and Tehran, both over project delays and payment issues.  It cannot be assumed that the construction of a Russian nuclear power plant in Egypt would be immune to similar problems.

During the Putin visit, it was emphasized that Russian-Egyptian trade has grown to $4.5 billion in 2014.  Egypt is a major purchaser of Russian wheat, and around 3 million Russian tourists visited Egypt in 2014.  Just how much further Russian-Egyptian trade can increase, though, is unclear.  In any event, its possible growth is unlikely to do much to mitigate the effects of Western economic sanctions against Russia or the collapse of oil prices which has greatly reduced Russia’s petroleum export income.

Putin’s discussion of how Russian-Egyptian trade might no longer take place in US dollars, but in Russian and Egyptian currencies, was portrayed by the Russian press as somehow serving to undermine US influence in Egypt.   It is not clear, though, how such a move would either hurt America or—given the instability of the ruble—benefit Egypt.

One avenue of Russian-Egyptian cooperation that could have been highlighted—but was not—was the previously announced Russian offer to sell arms to the Sisi government.  When the Obama Administration cut back American arms sales to Egypt after Sisi overthrew the elected President Mohamed Morsi and then proceeded to crush his supporters, Putin dramatically offered to sell arms to Egypt instead.  The deal, though, depended on Saudi Arabia providing the money that Egypt did not have to buy these Russian weapons.  But with Saudi Arabia unhappy with Moscow’s unwillingness to reduce its support to the Assad regime in Syria or distance itself from Iran—and with American arms supplies to Egypt having resumed—Riyadh’s willingness to supply the necessary funding for Egypt to purchase Russian weaponry appears to have declined.  Even some Russian commentators recognize that the Egyptian military—including Sisi himself—is not willing to switch from relying primarily on America to Russia for military support.

Given that so little of substance seems to have resulted from Putin’s visit to Cairo, and that both Putin and Sisi must have known that this would be the case beforehand, it seems the value of their meeting f had more to do with how it would appear.  Sisi may have hoped that meeting Putin in Cairo would show Western governments critical of his undemocratic rule that Sisi has other options. Consequently, the West should treat him more respectfully if it doesn’t want Egypt to move away from the West and toward Moscow.  Similarly, Putin may have hoped that, at a time when Russian relations with the West are deteriorating sharply over Ukraine, being received in such a friendly manner by the leader of the most populous nation in the Arab world will be viewed by non-Western governments (and even some Western ones) as a sign that Putin is a respected, legitimate leader whom they too can—and should—work with.  And for both Putin and Sisi, the meeting may be seen as a way of impressing their domestic audiences that just meeting with each other shows that they can “defy the West,” thus strengthening the claims of each to internal public support for being authentic, nationalist leaders.

In truth, though, it does not appear that the West is overly concerned about the possibility of increased Russian-Egyptian cooperation.  Even Ahram Online noted that in reaction to the announcement of the Russian-Egyptian nuclear power plant project—the most significant result of the Putin-Sisi meeting—US State Department Spokesperson Jen Psaki stated on February 10 that, “We don’t have concerns about what we know to date about this (memorandum of understanding).”

This is an indication that the Putin visit to Cairo does not have much significance to America and the West.  Indeed, it may not have all that much significance for Russia and Egypt either.  Improved ties to Egypt, after all, will not help Putin reduce the rising costs of his Ukrainian venture or significantly mitigate the impact on Russia of sharply lower oil prices.  Nor will improved ties to Russia result in Moscow expending significant resources on behalf of Sisi.  And both Putin and Sisi are undoubtedly well aware of all this.