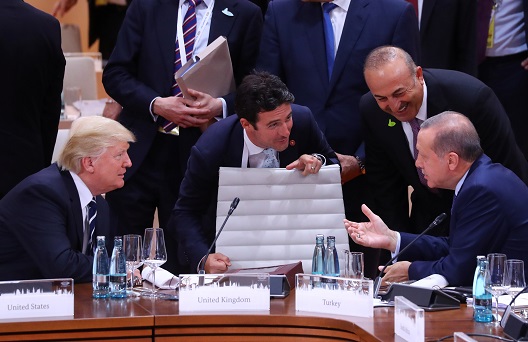 The United States does not have a Turkey policy. The current US approach to its NATO ally is subordinate to the needs of the war against the Islamic State (ISIS, ISIL, or Daesh), and the need for an effective local ground force to partner with US special operations forces. The result: the United States military has partnered with the Democratic Union Party (PYD), the Syrian branch of the Kurdistan Workers’ Party (PKK), which is an insurgent group active in southeastern Turkey for close to four decades. The PYD’s militia, the YPG, is the main component of the multi-ethnic Syrian Democratic Forces (SDF). Ankara, too, has no US policy. The ruling Justice and Development Party (AKP) has vacillated between two extremes: effusive praise for the Trump administration, while also blaming the United States for being part of the failed July 15, 2016 coup attempt.

The disconnect is indicative of a broader issue. The two allies have struggled to define the raison d’être of the alliance in the years following the Cold War. The AKP has flipped Turkey’s traditional approach to the United States and, by extension, NATO. To try and manage relations with Turkey, the US should now begin to explore ways to disentangle Turkey from current air operations in support of the SDF, and to focus on a joint fight against the al-Qaeda threat in Idlib. This recommendation would not solve all the problems afflicting US-Turkish relations, but could help the two allies find common cause on a shared threat.

It Has Never Been Easy: A Difficult Alliance to Manage

During the Cold War, the US and Turkey had their share of differences, but the threat from the Soviet Union kept them on the same side of the policy debate. Moreover, the Turkish defense establishment is dependent on the US for training, assistance, and equipment. This paradigm changed in recent years. Ankara is still dependent on the US for equipment, but the AKP has a track record of refusing to follow the lead of the United States for non-NATO related military operations.

This divergence helps to explain recent US and Turkish actions in Syria. To date, the US has found common cause with a Kurdish militia to defeat the Islamic State, without committing to overthrowing Bashar al Assad’s government. However, the militia parent group, the PKK, fights an insurgency in Turkey. This critical divergence deepened tensions, even as the two allies muddled through this period of extreme turbulence. The US has an interest in managing its relationship with the Turkish government and trying to put these recent tensions in the rear view mirror. Turkey is a NATO member and its bases are still available to the United States for NATO specific military operations. The growing threat from Russia makes Turkish cooperation on Black and Mediterranean Sea a key pillar of US military posture along NATO’s flanks.

These broader debates about Turkish-US and Turkish-NATO relations are now subordinate to the war against ISIS, and the determination in Washington to pursue the war against Islamic State with a light military footprint. More robust cooperation on Al-Qaeda would have to fall in line with the broader US effort in Syria, and thus would not take the place of current operations against Islamic State. As such, it does not forebode the breaking the US-SDF partnership. Instead, this proposal is aimed at reaching a short term understanding with Turkey on a shared problem.  The idea, then, would be to try and leverage any positive momentum to address broader security challenges that the US, Turkey, and NATO all face.

Starting the Conversation: Mattis and Canikli

Secretary of Defense James Mattis will soon travel to Ankara to meet with his new counterpart, Nurettin Canikli. As has become custom, Canikli is certain to address the current US-SDF partnership, and underscore how Turkey views this relationship with suspicion and dismay. The US position, in turn, will emphasize that the relationship is tactical and ISIS specific, and that it will ensure that Ankara’s security concerns are addressed. The power imbalance in the bilateral relationship has helped to sustain US-Turkish ties. To date, Ankara has calculated that it remains in its best interest to retain ties to its most important ally, despite its partnership with a group Turkey identifies as its top security challenge.

Ankara’s lack of a US policy has resulted in a series of internal contradictions. The Turkish government often threatens to attack the SDF. Yet, it is also hosting air assets that the US uses to support the group. The AKP has also constructed a false narrative of western support for the failed July-coup. The AKP’s narrative has some real traction amongst elements of the party and its base, despite this version of events being completely untrue. Yet, at the same time, President Erdogan has sought to cultivate ties with Donald Trump, whose party members blame for trying to kill the Turkish president.

In the short term, the two sides need to manage relations, while the war against ISIS remains the key focus of the US national security establishment. The trajectory of the war in Syria may give the US some options to do this. The focus of the US military effort is now in eastern Syria, reducing flight times from Jordan, where the US is now flying missions in support of the SDF. Incirlik Air Force Base continues to play a key role in the air war, but as the war has moved away from the Turkish border, it is no longer critical for certain missions. This could give the US and Turkey some flexibility to expand the scope of the air war to include al-Qaeda targets in Idlib, a short flight from Turkey.

At Incirlik, the United States should consider a model based on Joint Task Force Proven Force, the agreement reached to allow US strikes from Incirlik against Iraqi targets in 1991. The Task Force was under the operational command of EUCOM, but under the tactical control of US Air Forces, Central Command. This approach would levy greater authority to a combatant command that has a history of working closely with Turkey, and better equipped to manage the relationship. The air strikes would focus on striking al-Qaeda leaders and support infrastructure in Idlib. It would also shift the burden of support for the SDF to Jordan, thus removing a key point of irritation. This proposal is meant to be the start of a conversation, and thus could expand to include international effort to address the likely humanitarian aspects of any increased military campaign in the area. It would also have to discuss a potential role for Turkish ground forces, most probably on the Turkish side of the border to help deal with outflows of people.

The constraints on such an approach are numerous. On the US side, key elements fighting the Islamic State may resist efforts to expand the scope of the campaign. The bureaucratic and logistics may also pose problems, ranging from staffing a new Task Force to CENTCOM – EUCOM cooperation. On the Turkish side, this approach could leave Ankara vulnerable to the mass movement of people out of Idlib, once airstrikes start. This approach would also force Turkey to have to seriously contemplate their role in a military campaign, independent of a broader effort to unseat Bashar al Assad. Russia, too, remains a wildcard and could seek to extract pledges to cooperate with the coalition, which would violate current American law, and raise ethical questions about joining with Russian pilots that use indiscriminate bombing to take territory. The regime could exploit the chaos to expand territory, undermining Turkish-led efforts to ensure that the non-al-Qaeda linked opposition abide by any broader agreement with the Russians to not take territory beyond current front lines. As a result, this broader agreement could simply devolve into a dedicated effort to conduct high-value targeting of al-Qaeda leaders in Syria from Turkish territory.

Yet, despite these obvious limitations, the spinning off an al-Qaeda focused effort could help to focus US-Turkish relations on a common set of military goals. It would also let Ankara off the hook for supporting an air campaign that it does not agree with. It could also help to refocus an element of the relationship on a shared threat, now based on Turkey’s border with Syria. Turkey would be expected to provide intelligence to coalition planners. It would also host the base. The US could also insist on an informal “handshake agreement,” wherein Erdogan eases off the anti-western rhetoric and takes step to improve relations with key European allies, like Germany.

Turkey, the US, and NATO share a set of common security challenges in the region. Syria is just one of them. There are many ways for the two sides to engage, albeit while recognizing the US partnership with the SDF is likely to continue, and US military operations will be focused on high-value target (HVT) strikes against ISIS leaders for the foreseeable future. This portends a continued US presence in Syria. Thus, the two sides need to get creative, or otherwise let the conversations about strategy continue to go round and round in circles, without any real conclusion or coherent policy to manage relations.